When a cool head was needed as things looked like they might be about to fall apart right at the end, the man who was making his 132 appearance for Mayo equalling James Nallen’s record number who steadied the ship and calmed the nerves with a brilliantly taken point. Andy Moran’s score three minutes into injury time pushed Mayo back into a two point lead after Donal O’Hare’s brilliantly taken goal had brought the Mourne county men right back into the game and had Mayo hearts racing and fingers checking twitter feeds to see how things were developing elsewhere.

At the end of the day Mayo stayed up in division one and oddly enough finished on the same number of points as Cork who were relegated and Donegal who made the semi-final, but when the scoring difference was totted up the only the thing that mattered today was that Mayo will be in the top eight next season.

There is still plenty for Stephen Rochford and his side to work on between now and the summer, the looked to have this game under complete control on at least two occasions, but they let Down back into the game with a regularity that if repeated on the fast fields and white heat of championship action that would be punished more severely.

Oddly enough during this game Mayo broke well more than even on Down’s kick-out and cleaned up on their own when it was played short, but when Down got a full press on it or the game was slowed down for an injury or for the referee to sort something out and Mayo were forced to kick the ball long, the ball quite often ended up in Eamon Burns’ sides hands. 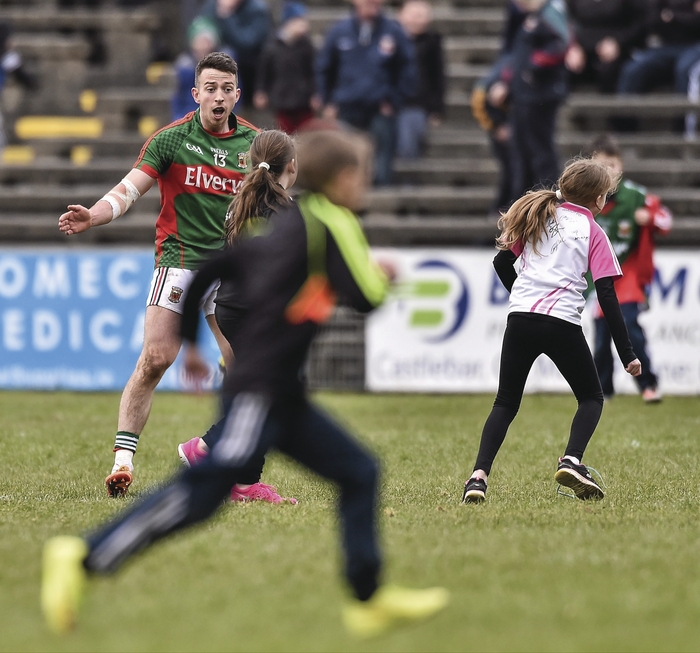 Game still on: Evan Regan tries to get supporters off the field who though the game was over late on. Photo:Sportsfile

It all started so well for Mayo, Aidan O’Shea won the kick out and charged at goal and fed the ball to Alan Freeman who fisted it over the bar, having nearly got in for a goal chance. With less than a minute gone on the clock Mayo were two to the good, after Chris Barrett wandered downfield and slotted the ball over the bar. Down did reply almost straight away when Ryan Mallon hit a lovely score from out the field.

Even Regan got the first of his nine points on the day before the three minute mark had elapsed after Aidan O’Shea had been fouled close to goal, then in the space of 30 seconds Aidan O’Shea pointed after Jason Doherty had done brilliantly to field a ball played in at a difficult height that was quickly followed by Regan’s second point from a free leaving the score 0-5 to 0-1 and there was barely five minutes gone on the stopwatch.

Down did come back into the game and quick fire points from Kevin McKernan and goalkeeper Michael Cunningham who scored two on the day had the gap back to just two points with eight minutes gone.

Regan responded with another score from a free nine minutes in and three minutes later, Conaill McGovern had a goal chance for the visitors after a mix up in the Mayo defence but he arrowed his shot just wide of the right-hand post, but from their next attack O’Hare left the score 0-6 to 0-4 after 13 minutes.

Cillian O’Connor kicked his first point of the day 17 minutes in when he put over a free after Doherty had been fouled after he’d been picked out with a peach of a pass from Shane Nally and two minutes later the Ballintubber man had the ball in the back of the net.

Evan Regan did exceptionally to pull the ball from the sky after a quick free from O’Connor, Regan broke for goal but as he tried to pull the trigger his foot was caught by an errant Down foot and the referee had no hesitation in spreading his arms and awarding the spot kick. O’Connor finished the ball to the back of the net with composure you’d expect from one of the best marksmen in the game and put his side 1-7 to 0-4 in the lead and seemingly in control.

But Down kept coming back at Mayo and two quick fire points from O’Hare and Mark Poland brought them back into the game. The teams continued to swap scores and with six minutes left in the half Mayo were leading 1-9 to 0-7. O’Hare cut the gap even narrower from another free four minutes from the break and a minute later Mayo should have had the ball in the net for the second time.

Aidan O’Shea won’t want to see this particular play again too often, his brother Conor did the hard work drawing in defenders and creating he space in front of goal, he found Aidan with a nice pass, but with the goal at his mercy and only six yards out, he managed to hook the ball the far side of the post and wide.

Peter Truley and O’Hare chipped in with two more points before the break and Mayo went in leading by 1-9 to 0-10 at the short whistle, knowing the really should have been further ahead for the amount of the ball they had.

The second half saw Mayo come out of the blocks quickly and by the quarter of an hour mark in the scond half they had outscored Down by seven points to two lead by seven. Regan and O’Connor scored three each and Jason Doherty grabbed the other. 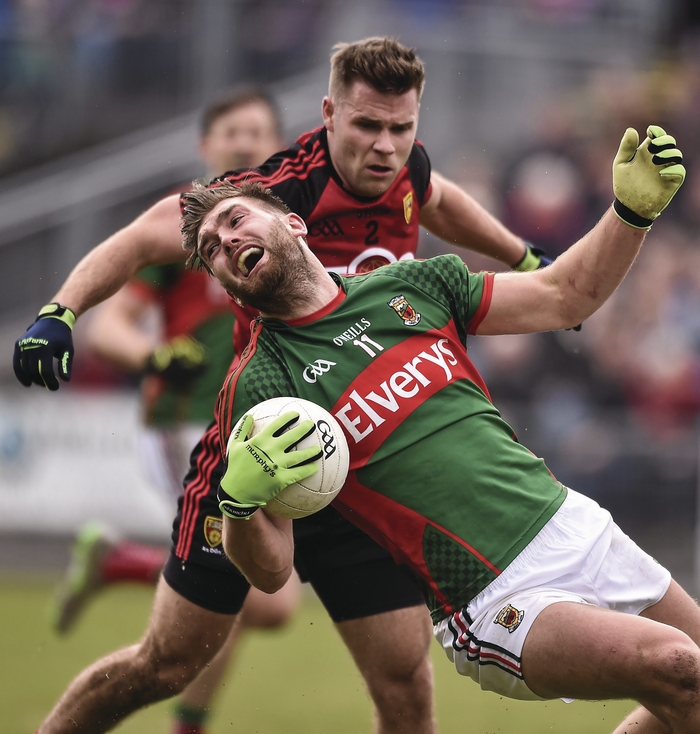 Falling man: Aidan O'Shea is fouled in possession of the ball. Photo: Sportsfile.

That looked like it was now a done deal and Mayo could see out the final 20 minutes and tag on some more scores to ensure they would survive in division at the very least. But they seemed to take their foot off the gas a bit to much and invited Down back into the game and they obliged by kicking four unanswered points to leave just three between the sides with two minutes left in normal time.

When Regan kicked his eighth point with a brilliant effort from a free on the wrong side for a left footed kicker, most of the 8,352 in attendance would have assumed that, that would be enough. But there was plenty of drama left in this game.

First the Mayo defence parted way to easily and Barry O’Hagan got in for a shot at goal that was brilliantly saved by Clarke, but Mayo failed to clear their lines and O’Hare ended up with the ball and hammered the ball to the back of the net from 20 meters out to leave just one between the sides and the momentum was now very much so with Down.

Andy Moran scooped over a great effort under pressure to push Mayo two in front in injury time and when Mayo repelled the next Down attack and were awarded a free out, some of the younger fans in attendance mistook it for the full time whistle and they invaded the pitch. We then ended up with the bizzare scenes of stewards trying to clear those supporters off the field at the bacon factory end as Mayo tried to build an attack from the opposite end of the ground. As the supporters were being ushered off, Mayo were awarded a free close in on goal after Regan had been pulled back as he tried to make a run for the ball and the Ballina man made no mistake with his finish to see Mayo over the line by three points at the very end.