The long road home from Cork gave Stephen Rochford plenty time to think over what had just happened in his first game on the road in charge of Mayo after he watched his side get beaten out the gate by nine points in their league opener.

The major talking point after the game wasn’t the result or the performance, but the fact that Lee Keegan remained on the field for ten minutes after a heavy clash with Eoin Cadogan which left both men down holding their heads. The Cork full back was replaced straight away, while Keegan was helped a shore ten minutes later.

Speaking in the aftermath of the game having ended only minutes earlier, Rochford said that “Lee took a bang in a collision with Eoin Cadogan in the middle of the field and he was responsive with the medical team when he was being there, but inside the next minute or two it was noticeable that he wasn’t, and maybe being captain today he wanted to lead a bit of charge back. But we’ll make an assessment on him now over the next couple of hours.”

The situation was clarified later on in the evening when shortly after 6pm on Sunday evening, the Mayo management team issued a statement saying “In today’s Allianz NFL division one clash with Cork in Páirc Ui Rinn, Mayo player Lee Keegan was substituted with concussion symptoms. The Mayo medical team accept that Lee should have been withdrawn as a precaution a number of minutes earlier when the collision occurred.

“Player welfare is of paramount importance to all involved with Mayo GAA and members of the Mayo medical team have been to the forefront of player welfare initiatives in the GAA nationally. Lee is recovering and will continue to be monitored over the coming days. As always, Mayo will follow the established Return to Play protocols.” 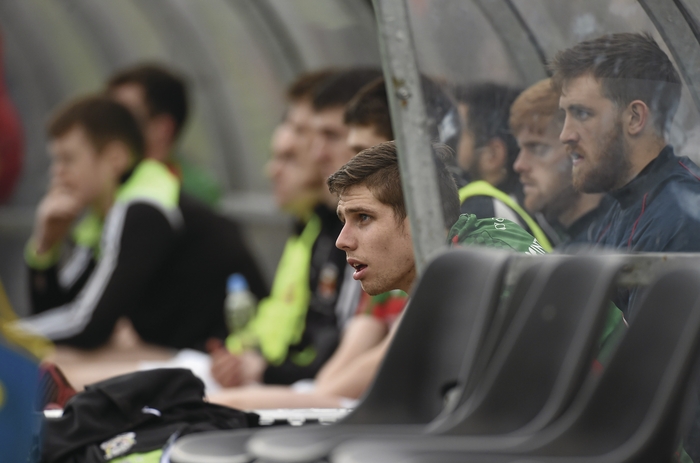 On the game as a whole when asked about his initial thoughts on what he’d just seen, Rochford said, “You go into every game looking to put in a performance and present your best foot forward, but clearly we were second best today. Probably in the first half we created a couple of goal chances and we were level for the first 15 minutes going into the second quarter of the game, then we sat off a little bit more and Cork got more of a grip around that middle third of the field and were able to supply in a better quality of ball and they made hay from it. If we could have kept that to a five-point game (at half time ), we would have had a better chance going into the second half.”

The second half didn’t get much better for Rochford and his side, but it’s all about learning from it and planning for the next challenge on Saturday night coming. “They ratcheted off the first four scores of the second half and really that was going to make it extremely difficult. We needed to get a goal or two and we didn’t even create a chance in the second half. That would be dissapointing but the league is league, you have got six games to move on towards in the next two months. We need to start preparing for the Dubs now in a couple of days time”

When asked about the gulf between the sides in Páirc Uí Rinn and did it have to do with the amount of work that either side has been able to put in on the training field so far this year, Rochford said it was noticeable saying, “It’s a bit early to say what the gap was seeing as this was the first real competitive game that you’re seeing division one teams up against each other and we went back training on December 29, Cork were maybe back the end of November or earlier and those four or five weeks do count, and look that gap was noticeable there and we’ll look to close that over the next couple of weeks.”

Along with losing Keegan, Mayo also lost Kevin McLoughlin to injury in the first half as for McLoughlin’s injury, Rochford said that “Kevin is a tight hamstring, he’s had an hamstring issue into the FBD and he complained a little about it being tight and obviously been with our numbers being what they are we looked to pull him as quickly as possible.” He also added that he didn’t expect to have anyone available for next Saturday nights game that wasn’t available for the loss to Cork.