Not long after the game had ended in MacHale Park on Saturday afternoon, cones were laid out at the Bacon Factory end of the ground for a small training session game.

Shortly after that out trotted members of the Mayo panel who weren’t involved and some of the substitutes to take part in a short training game.

Keeping those guys ticking over as best they can to ensure they are getting as much football into their legs is all part of Mayo’s plans to make sure they will be ready to be called on when needed, due to the condensed nature of the season.

As they were put through their paces by the coaching team James Horan kept an eye on the proceedings as he spoke to the media about the game that had just finished up a few minutes earlier, before heading back down to oversee what was unfolding.

As for his initial thoughts following his sides win over Down, he was pleased with large aspects of it.

“Delighted with how we started, particularly in the first quarter and the start of the game, really for the first three quarters I thought we were very, very good. I thought we got sloppy towards the end - but look, very happy.”

A couple of players got their debuts for the side while more are coming back after injuries and he was happy with how they fitted into the team.

“A couple of more debuts, I thought Enda Hession did very, very well, a great player for us and Aiden Orme came on as well, we got Eoghan McLaughlin back on after his injury, so overall delighted with the result.

“Colm Boyle’s first game time since the cruciate, Eoghan McLaughlin back on after injury so it is great to get those lads back on the field. Fionn (McDonagh ) had a bad injury and to be able to come back at such a level just shows the huge work he has done off the field on his own, so delighted with the way he is playing.”

But with the shortened season it will be a challenge for lads who have been out to make their way back into the team: “The challenge for the injured guys is the league and momentum is so quick and then championship and they are trying to catch up to the guys who are on the field and that is the challenge for them, but we are pleased where we are.

How everyone does is training is the marker for selection he added, with so little time between games in the league and the start of the championship.

“It’s funny, last year was condensed and this year is so condensed, it takes a lot of the decision making away from you.

“We’ve training on Tuesday and Thursday and a game next Saturday, and we are going to do that as well as we can and who ever is playing well and in form we will try and give them game time.

“The guys who are getting game time brings momentum and we are training now to try to keep everyone at the same level whether you play or not. Look training is your barometer and how well you do there determines if you get game time or not, that’s the real test.” 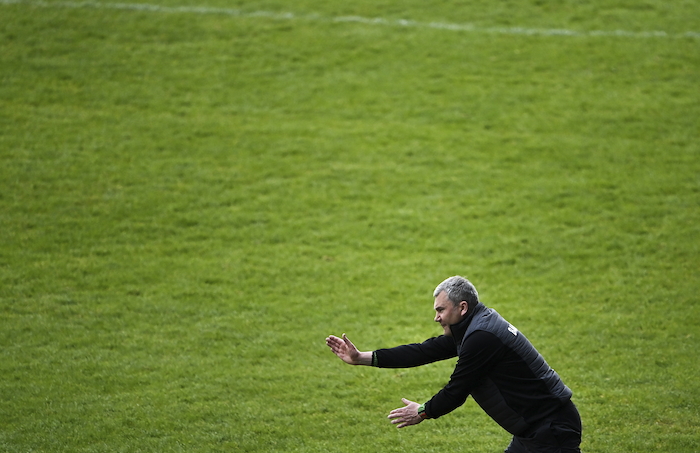 Squeeze up: James Horan tries to get a message across to his players. Photo: Sportsfile

Trying to marry the dual goals of getting back out of division two and bringing on new players to be ready for a championship campaign is where Mayo are at, and who gets the shot depends on how they are preforming each week and it doesn’t; matter if they have been there ten years or ten days he added.

“Very much that, when we’re training, you can see that we have a lot of young players coming through and very, very good players and if you are playing well of training regardless of it being your first day or you’re in ten years, you will get game time and that is the way it has to be - that can be hard on some fellas that have played routinely, so there is no young or old I suppose when we are trying to select these, it is whose on form and go with that.”

Horan was very happy with the shape that his players came back in after the break post All Ireland final, even if they have had only half a dozen sessions before Saturday’s game.

“We’ve had six sessions or seven, that’s all we’ve had - we were very unsure because we just didn’t know where we would be. The guys you can see have done a huge amount of work individually over the Winter, they were in very good shape and quickly got up to speed so look, very good overall.

“But how we tried to play is the most pleasing, we are trying to tweak a few things here and there, overall very good, but as I said we got sloppy near then end, but overall happy with today.”

One other thing he had first time experience of on Saturday was that the role of the Maor Fóirne is no longer part of the game, James Burke filled that role in recent years running on to the field and passing messages along from the management team to the player, but with that not allowed anymore it was just Horan on the sideline

“We’re fascinated with rule changes in the GAA and football, I don’t understand a lot of them to be honest, it is different. It is fine where there is no crowd in because you can talk to a player close to you, but if that changes - just how, I don’t know. As we always do, we’ll adapt to try and figure out.”