Mayo gave their promotion hopes a big boost on Saturday in Hyde Park when the saw off Roscommon by nine points, to make it two wins from two in Division 2B of the National Hurling League.

Derek Walsh made no changes to the team that beat Derry six days earlier and his faith was repaid with another impressive performance from his charges.

Keith Higgins finished the day as Mayo’s top scorer getting 1-5, while Shane Boland chipped in with four points to lead the scoring charts for Mayo.

Higgins got the scoreboard moving from a pointed free four minutes in, that was cancelled out by a Cathal Dolan effort from play two minutes later.

Both sides traded scores in the next wave of white flag waving, with Adrian Phillips tapping one over the bar after being found by Cathal Freeman - that effort was replied to by a Eoin Costello score from out on the 65 meter line to leave it all square at two points apiece.

Shane Boland got his first of the day from play from out on the right hand side on the 45 meter line to put Mayo back in front, before a Cathal Dolan point levelled the game up at the first water break.

Mayo hit the first two points after the resumption, but they were quickly canceled out before Keith Higgins edged Mayo back in front 28 minutes in.

As the game ticked into injury time, Mayo hit a rich vein of form and reeled off five points before the break to go in leading 0-11 to 0-6. Those scores came from a monster Gerald Kelly free from his own 45, that was the second point in a week for the Mayo goalkeeper.

Kevin Kiely landed the next score, then Shane Boland added another from a free before Cathal Freeman got his first of the day and the run was then finished off by a fine 65 from Higgins. 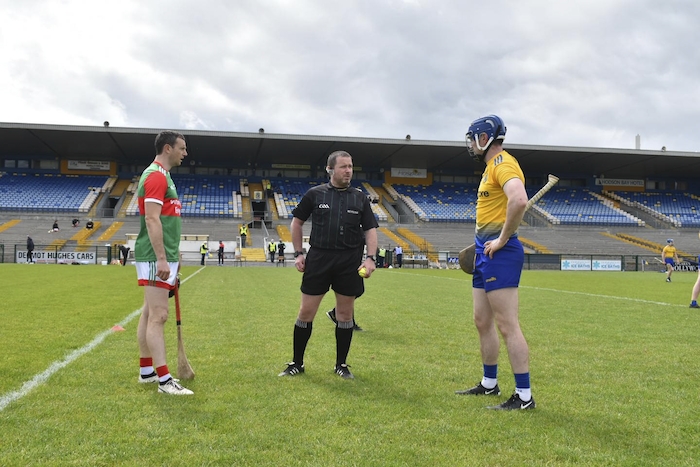 We'll play that way: Mayo's Keith Higgins goes in for the coin toss ahead of Mayo's game against Roscommon. Photo: Mayo GAA/Facebook

Roscommon got themselves right back in the gam not long after the break, when Jack Lohan reacted quickest to bat the ball home from close range after a Dolan free dropped short and was parried away by Kelly in the Mayo goal.

Walsh’s side reacted brilliantly with Cathal Freeman landing the next score, before Dolan replied for the hosts with a well taken score.

Mayo were awarded a penalty six minutes into the half, when Shane Boland was taken down just inside the penalty area which saw Sean Trundle get sent to the sin bin for ten minutes.

Freeman stepped up to take the penalty but he blasted his effort over the bar for only a one point return from the clear goal chance. Keith Higgins added on a 65 not long afterwards, before a Oisin Kelly effort made it 0-14 to 1-7 with ten minutes gone in the half.

The next score proved to be the crucial one of the day - Keith Higgins took a swipe for a point but he didn’t connect with the sliothar right and Enda Lawless made a mess of his effort to keep it out, with the umpire judging that it had gone over the line.

Shane Boland stretched Mayo’s lead out even further with the next score after being brilliantly picked out in space by Jason Coyne and Mayo were 1-15 to 1-7 up and heading for home with the points.

Mayo tagged on five more points before the end with both sub Corey Scahill and centre half back Pearse McCrann helping themselves to a brace each - Scahill’s second point could have been a second goal for Mayo when he batted the ball over the bar from close range right at the death.

Mayo move on to their third game of league next weekend, when the make the long trip next Sunday to Letterkenny to face a Donegal side they last saw in the Nicky Rackard Cup final in last November and will be looking to avenge that defeat.