Mayo got life in division two off to a winning start in MacHale Park on Saturday, seeing off Down at their ease with a hard working and at times exciting display.

In a game that was played in alternating sunshine and heavy downpours, Mayo started with nine of the team that went to the post in last December’s All Ireland final.

One of the newcomers was Garrymore’s Enda Hession who was getting his debut, while Rory Brickenden who made two substitute appearances last year in the championship got his league bow in this one.

While a number of experienced players made their leave from the inter-county scene earlier this year, two of the next generation really lit up this game - with Tommy Conroy helping himself to 1-3 from play and setting up Mayo’s second goal for the Belmullet man. Matthew Ruane put in a top class showing in the middle of the park, until the intensity petered out down the home straight.

Cillian O’Connor who finished up with eight points for his efforts got the scoreboard moving inside the first minute, tapping over a close range free after O’Donoghue was fouled. Down responded three minutes later with a fine score from Daniel Guinness from out on the left to level it up.

Both sides traded three points each over the next ten minutes with Michael Plunkett, Conroy and O’Connor getting the scores for Mayo, with Corey Quinn tapping over a mark, then adding one from play and James Guinness getting their fourth of the day.

The game moved in Mayo’s favour 15 minutes when Conroy picked up possession and charged at goal, shirking off the challenge of Patrick Murdock then hammering the ball home on the run under Rory Burns to put Mayo three clear. 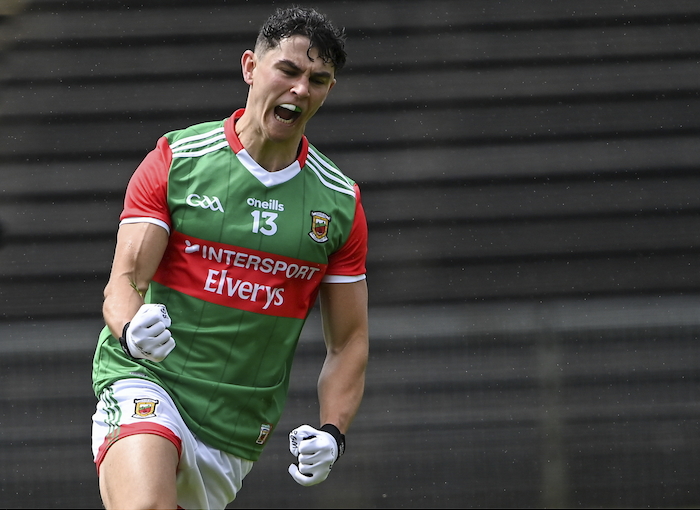 That feeling: Tommy Conoroy celebrates after scoring his goal for Mayo. Photo: Sportsfile

Fionn McDonagh edged Mayo further ahead after rising high to fetch a looping poke forward by O’Donoghue, before he fired over from close range. Down did have the final say on the first quarter before the water break with a Barry O’Hagan free, but they went in trailing 1-5 to 0-5 to their hosts.

Mayo put their foot to the floor in the second period with Mullin pointing after a lovely turn in behind the cover after finding himself high up the field. Diarmuid O’Connor then saw a pass from a free to his bother Cillian skid off the deck and up and over the bar to put Mayo five clear, O’Donoghue then trapped good point from play.

The scores kept coming for Mayo through Jordan Flynn and Conroy and they went in leading 1-10 to 0-6 and looking good.

It was more of the same after the restart, with Ruane driving through to get things going, then Cillian O’Connor put over a free, just before Mayo’s second goal of the day that really killed the game off as a contest.

Conroy cut in from the right after being played in behind his man, he could have taken on the shot himself but he spotted O’Donoghue free across the face of goal and he picked out the Belmullet man who finished to the back of the net, wrapping up the points for Mayo. 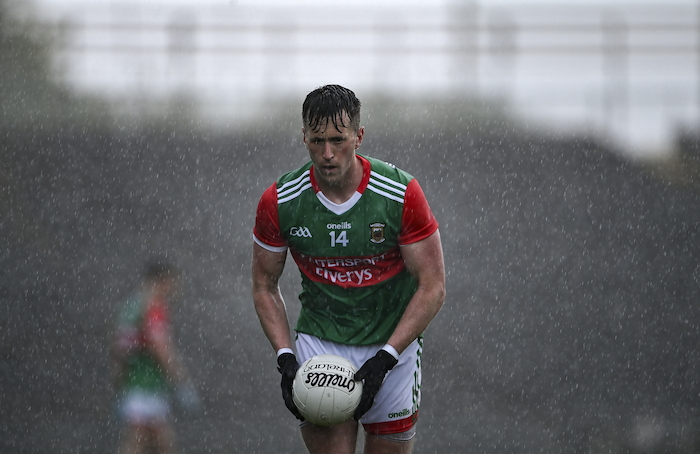 Mayo din’t let up after that score either tagging on four more points before the break, with Cillian O’Connor hitting a 45, Bryan Walsh chipping in from play after coming on at the break, Ruane got his second of the day after another strong run and Cillian O’Connor put over another free to send Mayo in leading 2-16 to 0-8 at the second water break.

It was all about seeing it out from then on and Mayo did that at their ease with Stephen McConville getting a goal for Down, but it was too little too late for the Mourne men as Mayo had the points well wrapped up by then.

Mayo move on to the midlands next week where they will face Westmeath as they continue their push to make it out of the second tier at the first time of asking.