For the first time since 2015 Mayo are preparing for a Connacht Senior Football Championship Final.

But this one was much different, in a year when there is no second acts the feeling in the ground may have been of a dress rehearsal rather than a Broadway main attraction before the game - but the performance that Mayo gave was as polished as well oiled show that is going into it’s fifth run on the main stage when the game was there to be won. 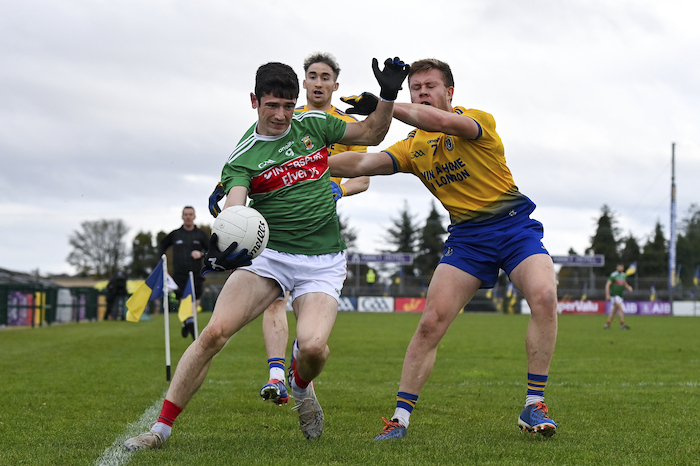 In the build up to the game, there were plenty of murmurs that Roscommon were ready for this one, well set up to give plenty of it to a Mayo side wounded after defeat in last years championship on their home patch and relegation to division two - but by the time that Diarmuid O’Connnor drove the ball past Colm Lavin finding the smallest of targets in the corner of the net just before the first water break those murmurs were proved to be not much more than idle gossip in the build up to a big match weekend.

Mayo were set up exactly as they needed to be - they pushed up hard on the Roscommon kick-out and hassled and harried their hosts with ferociously with a hunger Roscommon couldn’t match.

The final gap on the scoreboard was six points but it could have been much more if Mayo had taken some more of their chances or pushed themselves into top gear for much of the second half.

There was one change to the Mayo side that was named on Friday with Kevin McLoughlin coming in for Bryan Walsh - the Knockmore man did what he does best for long periods of the game making smart runs to collect the ball and string attacks together for those in front of him.

Cillian O’Connor finished the day with nine points to his name, he got the scoreboard moving inside the opening minute converting a free after Tommy Conroy was fouled by close in. He missed the first of three efforts from 45s he had during the contest not long after - an area that he will be looking for better conversation from in the weeks ahead as the competition heats up and the scoreboards tighten up.

Conor Cox got out in front of Chris Barrett for one of the few times he did all day to win a mark that he converted to level the game up four minutes in - but for the most part the Kerry import wasn’t a major factor in the game. 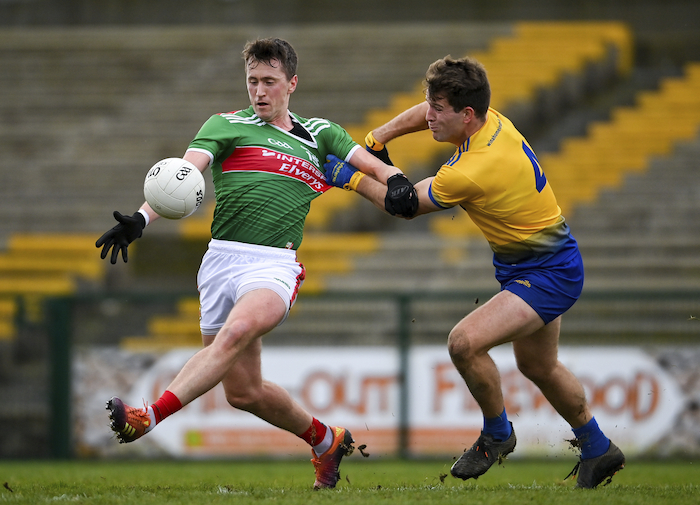 Under pressure: Cillian O'Connor tries to get a shot away under pressure. Photo: Sportsfile

Paddy Durcan edged Mayo in front with one of those points the Mitchels man has made his trade mark powering through a small gap in the Roscommon defence before slotting it over on the run, O’Connor kicked a second free after McLoughlin was fouled before Tadhg O’Rourke pointed for the hosts to leave it 0-3 to 0-2 after eight minutes.

Diarmuid O’Connor put Mayo two clear again with a beauty of a score off the outside of his boot from the far side of the ground and that gap was stretched out to three by McLoughlin who pointed after he was found by a quick sideline ball from Aidan O’Shea with the Roscommon defence sleeping.

Cillian O’Connor got his first from play just after the quarter-of-an-hour mark when he knocked the ball down to McLoughlin who flicked it back to O’Connor who was able to shape and hook the ball over the bar from a less than ideal position.

With the water break coming up Mayo hit the early knock-out blow Aidan O’Shea, Mattie Ruane and Eoghan McLaughlin held up the ball until Diarmuid O’Connor was spotted breaking in from the side.

The Ballintubber man collected the ball in his stride and made no mistake with a low well targeted strike to the bottom corner of the net to put Mayo seven clear.

Aidan O’Shea hit a sweet score to raise the first white flag after the resumption of the action and Mayo had the chances to hammer home their advantage before the half-time break kicking five wides from good position to go with another point from Tommy Conroy before the break.

Roscommon did tag on three points of their own before the break - but they were getting well beaten all around the park by Mayo it was always going to take a knock-out sucker punch from them for Mayo to be in any real danger. 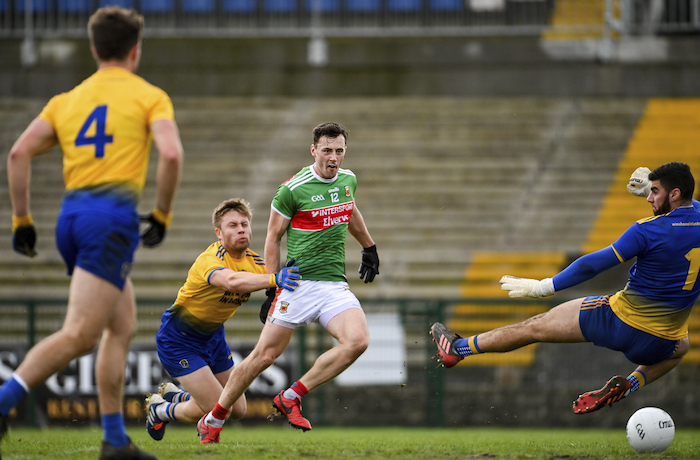 Eyes on the target: Diarmuid O'Connor rolls the ball to the back of the net. Photo: Sportsfile

Mayo changed things around for the early parts of the second half with Aidan O’Shea coming out around the middle of the field to add some physicality as the faced into the breeze, with McLoughlin also dropping back a bit more to shut down the avenues of attack for Roscommon.

Three points from Cillian O’Connor had the gap stretched out to 1-11 to 0-5 by the 45th minute and the game was already moving towards the end with Mayo never really threatened by Roscommon down the home straight - while the hosts did hit eight points of their own in the second half - Mayo always managed to keep pace and tag on one or two when needed to keep the gap more than comfortable.

The Mayo show rolls on to a Connacht Final against Galway next weekend, the Tribesmen will be itching to turn over the recent hammering that Mayo gave them in the league - but they will be coming into that one cold with their semi-final against Sligo not taking place having got a walk over from the Yeats County men due to a Covid-19 outbreak in their camp last week.