On a day for old fashioned six stud boots a sharp shooting performance from Cillian O’Connor was the foundation for Mayo to move on to next Sunday’s Connacht Championship semi-final against Roscommon.

The going underfoot and incessant drizzle from above made sure that this game was going to be about grinding it out on the field, a day for the basics and doing more of them right than your opponent and that is what Mayo did.

Leitrim were stout opponents, who stuck to their game plan and their task manfully throughout, but Mayo had that bit more class when it mattered and they eased their way to an eleven point win.

The opening exchanges showed that Leitrim were up for the fight and we’re just here to make up the numbers.

They raced into a 0-4 to 0-0 lead before ten minutes had gone on the clock, with their packed defence breaking at pace and using their limited possession expertly early on. 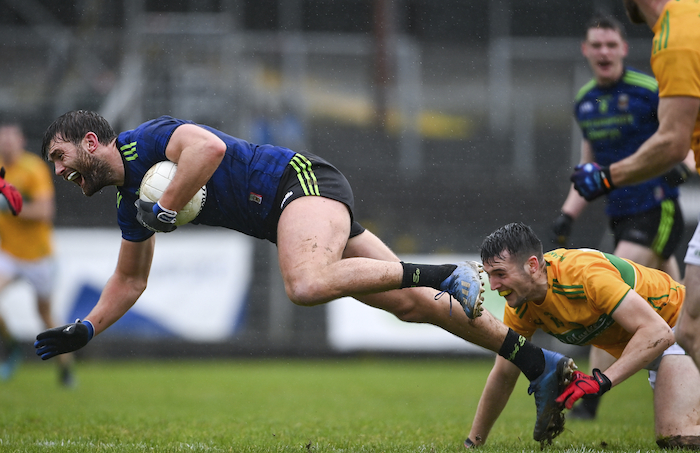 Falling down: Aidan O'Shea is tripped by Oisin MacCaffraigh as he tries to break for goal. Photo: Sportsfile

Shane Quinn pointed inside the opening minute and that score was followed by efforts from Evan Sweeney, Domhnaill Flynn and Keith Beirne.

Mayo had the majority of the possession, but were forced to go around the house and be patient as the Leitrim defence swarmed and hassled and harried them at every turn.

Jordan Flynn saw an effort drop short and Cillian O’Connor hit the pst and then Eoghan McLaughlin also saw an effort come off the upright before Bryan Walsh got the scoreboard moving for Mayo after a Ryan O’Donoghue effort dropped short and the ball was punched back to the Ballintubber man by Aidan O’Shea.

Mayo got a bit of luck not long afterwards when Oisín MacCaffraigh was shown a black card for a trip on O’Shea as he thundered towards goal, seeing Leitrim go down to 14 men for ten minutes.

Cillian O’Connor tapped over the resulting free to bring Mayo to within two points of their hosts as the conditions continued to deteriorate for both sides and mistakes in possession continued to mount from both sides.

O’Donoghue saw another effort drop short of the large from not much more than 30 meters before O’Connor slotted his second point of the day from close range after Leitrim keeper Brendan Flynn dived on the ball after being turned over by the Mayo attack as he charged out of goal.

That score sent Mayo in trailing 0-3 to 0-4 at the first water break - but by that stage their were starting to exert their superiority on the field.

Not long after the resumption Leitrim pushed themselves two clear through a Beirne free after Eoghan McLaughlin’s clumsy foul on Jack Gilheany.

However the game was about to move in the visitors favour when Mayo struck for their first goal of the day on 22 minutes.

Tommy Conroy was played in near the 14 meter line, he cut across the face of goal skipping by two players before driving the ball to the back of the net to put Mayo in front for the first time on the day.

O’Connor kicked a point from play not long after and then added another from play after a quick set piece move and then got his fifth of the half to put Mayo 1-6 to 0-5 up.

Leitrim could have got in for a goal right on the half-time mark when Donal Casey found himself clear behind the Mayo defence, but the hosts number two showed why he is a defender and his effort flew over the bar to leave Mayo leading by three at the break.

Keith Beirne got the scoreboard going after the resumption to close the difference to two points, Cillian O’Connor then kicked the first wide of the entire game on 38 minutes when he snatched at an effort on this left foot after a poor clearance by Flynn in the Leitrim goal was intercepted by the Ballintubber attacker. 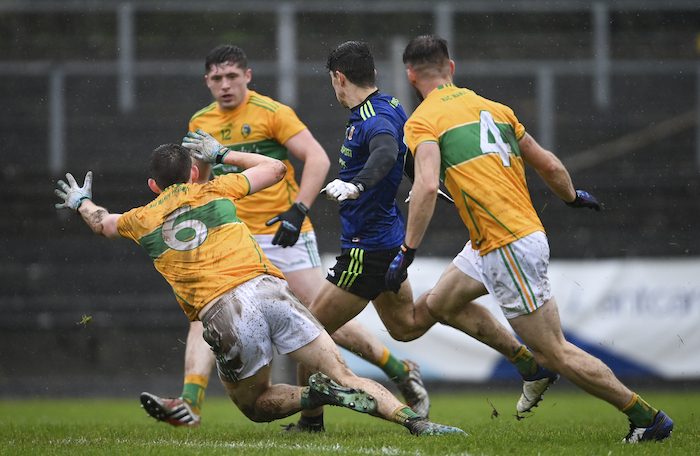 He made no mistake from a close range free on 45 minutes before Beirne added another pointed free for the hosts to leave it 1-7 to 0-8 in Mayo’s favour with with 25 minutes to go.

However over the next two minutes the game was done as far as the outcome was concerned when Mayo hit 1-1 inside 60 seconds.

Mattie Ruane pointed from close range after a galloping run saw him swap passes with Paddy Durcan and Stephen Coen before pointing and that was quickly followed by Mayo’s second goal of the day when O’Connor drove the ball home from the left hand side of the box and put Mayo six clear and heading for the semi-finals.

From then on it was all about seeing out the game for Mayo and making sure that they picked up no injuries ahead of next Sunday’s meeting with Roscommon.

They did that with relative ease, along the way O’Connor tagged on three more points two of them coming from 45s, Aidan O’Shea kicked two points with Conor Loftus and James Carr both also getting their name on the scoresheet.

One thing they will be disappointed with is that they didn’t take the three big goal chances that presented themselves with both Paddy Durcan and James Carr seeing their efforts well saved by Flynn in the Leitrim goal, while Lee Keegan saw his goal bound shot deflected away.

All eyes will be firmly focused not for Mayo and Roscommon next Sunday, it will be a step up in class against the division two league champions - but they have their motor running now and will be relishing a crack at the defending Connacht champions in their home patch.