Division two awaits Mayo next season after they were seen off by Tyrone by a single point in MacHale Park on Sunday afternoon.

Mayo knew going into the game that they were going to have to win this one to ensure they stayed in the top flight for another season, but last years league champions were unable to haul in the big lead that Tyrone had build up early in the second half.

James Horan’s side were dealt a blow before throw-in with Cillian O’Connor unable to take his place in the starting 15 and indeed the bench after picking up a knock against Galway last weekend.

Tyrone were always going to be a very different challenge for Mayo than the one they faced last weekend against Galway and they Ulster men proved a tough nut to crack right from the off. 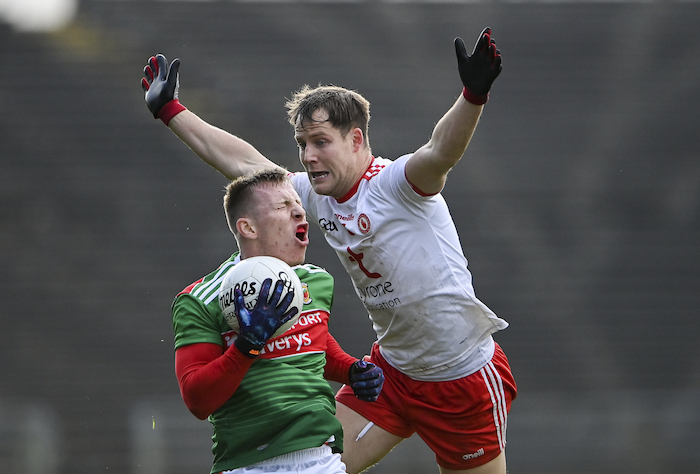 There was just one point between the sides at the first water break with Tyrone leading 0-5 to 0-4, the Ulster men could have been three or four more ahead if they had found their shooting range early on - with the Red Hand men putting a number of good chances wide of the target.

Mayo opened the scoring on three minutes with Paddy Durcan slotting the ball between the posts after a short 45 routine paid off.

Bryan Walsh should have probably rattled the Tyrone net after bing played in by Tommy Conroy, but he couldn’t get enough power in his shot to really test Niall Morgan in the Tyrone goal.

Conor McKenna levelled it up six minutes in with a well taken score after some good build up play involving Darren McCurry.

Tyrone were putting pressure on the Mayo kick-put early on with Morgan coming out from his goal to put an extra man into open play and cut off Mayo’s options along with their attack pressing hard to cut off short options for David Clarke - forcing him to try and pick out players under pressure on the flanks.

Eoghan McLaughlin edged Mayo back in front eight minutes in after a good run down the wing, beating two men with a hop and a skip to get himself the yard of space he needed to get his shot off.

McCurry levelled it up on the ten minute mark with a free after Kevin McLoughlin was pinged for folding McKenna on a long Morgan kick-out.

Mayo went back in front for the third time when Diarmuid O’Connor pointed a free from 40 meters out, but the lead was short lived with Michael McKernan levelling it up at three points each with 14 minutes gone from a mark. 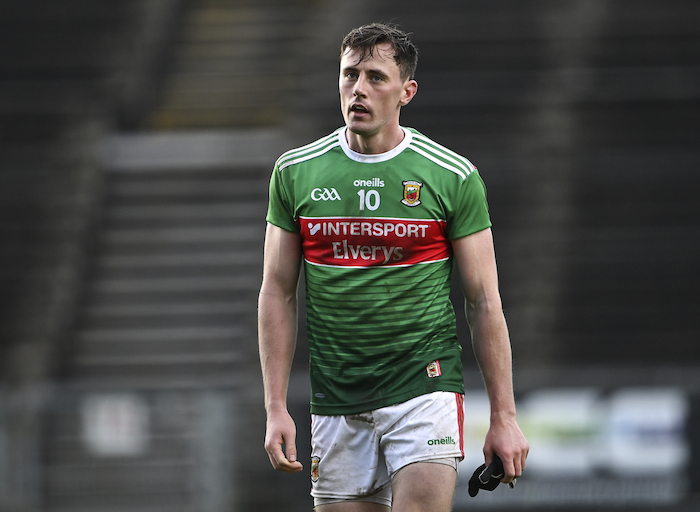 Feeling it: Diarmuid O'Connor takes it in after the game. Photo: Sportsfile

Conroy put Mayo back into the lead after he was played in through the gap by Diarmuid O’Connor, the Neale man could have taken on a goal but put his effort over the bar. That was the last time that Mayo led in the game with Peter Harte and Darragh Canavan pointing before the first water break.

Before the first enforced stoppage Mayo did have a goal chance with Darren Coen getting in behind the cover but he pulled his effort wide of the far post with a low drive.

The first score of the second quarter went Tyrone’s way with McKenna hitting his first three pointer of the day after Tyrone came up with the ball following a long Morgan kick-out that was missed by a number of players before it was worked through Canavan and Donnelly to McKenna who flashed it past Clarke in the Mayo goal.

Harte added on two quick fire points over the next few minutes and that had Tyrone 1-7 to 0-4 up and looking good. Mickey Harte seemed to have got his match-ups right with Mayo struggling to get on top in a number of positions around the field.

A Tommy Conroy point following a Oisin Mullin break stemmed the tide for a short while - but that score was relied to almost instantly by a Matthew Donnelly point.

On the half-hour mark Darren Coen opened his account for the the day with a free after he was fouled on his way to goal after being played in by Aidan O’Shea.

As the half ticked into injury time Tyrone struck for their second goal - McKenna picked out Canavan with a delicious pass that took out the Mayo defence and he hammered the ball home with a fine strike.

Before the half-time whistle was blow both sides tagged on a point each with Coen and McCurry raising the white flag for their sides to send Tyrone in leading 2-9 to 0-7 at the break.

James Horan made two changes at the break, with Ryan O’Donoghue and Fionn McDonagh coming into the side in place of Mark Moran and Bryan Walsh.

Two points from Darren Coen shortly after the resumption and one from Matthew Ruane had the game back to a five point game, but a Kieran McGeary point and then McKenna’s second goal when Tyrone made the most of a mix up on the Mayo kick-out looked to have Tyrone home and hosed. 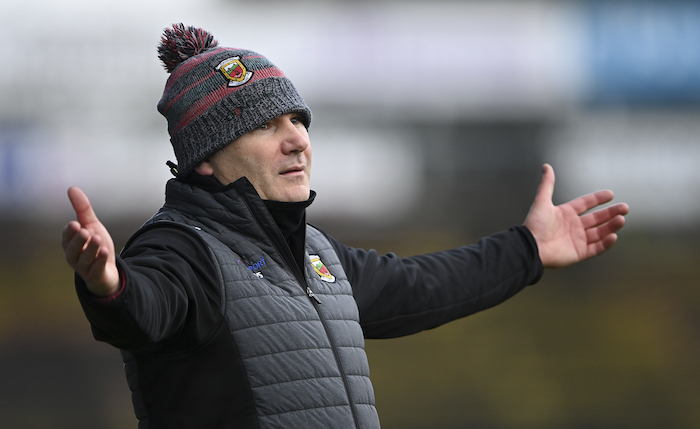 Come on: James Horan looks for a call from the referee. Photo: Sportsfile

Mayo did keep plugging away and had the gap back to just six points at the second half water break and still leaving them in with a chance if they could find some momentum and get a goal.

That goal duly arrived not long after the resumption when Tommy Conroy showed great pace to break through the Tyrone defence and a cool head to finish under pressure. Ryan O’Donoghue followed that goal up with a point and left the score at 1-15 to 3-11 and it was all to play for.

Mayo kept knocking on the door and had the advantage of man for ten minutes after Conor Meyler was shown a black card. James Durcan kicked three points from frees and O’Donoghue tagged over a mark down the home straight - but Tyrone were able to just always keep their noses in front with McCurry kicking a brace of points and McKenna one to leave Tyrone standing tall at the end and Mayo heading to division two for next season.