Mayo fell to their third defeat in the league on Sunday in MacHale Park - but they will have plenty to take from their second half showing against Kerry.

Trailing by seven points at the break they very nearly snatched at least a point at the death thanks to a hard working second half showing where they were far more purposeful in attack and left everything they had on the field.

The game couldn’t have started much worse for Mayo with Kerry rattling the back of the net inside the opening minute, Keith Higgins tried to pick out a pass from the full back line and the ball got caught in the breeze and dropped into the hands fo Micheal Burns, who played in Tommy Walsh - the Kerins O’Rahilly’s man was able to slip in Sean O’Shea who put the ball past David Clarke to get Kerry up and running.

O’Shea followed that up with a free from close range two minutes later and not long after Gavin White made it 1-2 to 0-0 after Mayo turned over possession once again.

It could have been much worse for Mayo five minutes in when Dara Moynhain was fouled by Higgins inside the large square and Kerry were awarded a penalty David Clifford stepped up and his effort crashed back of the bar and was cleared to safety by the Mayo defence.

The home side got something to cheer about when Darren Coen pointed a free seven minutes in from close range after he was fouled by Tadhg Moley on the edge of the D and Mayo started to have a few chances but they pulled a number of efforts wide of the target and dropped a few more short into the keepers hands. 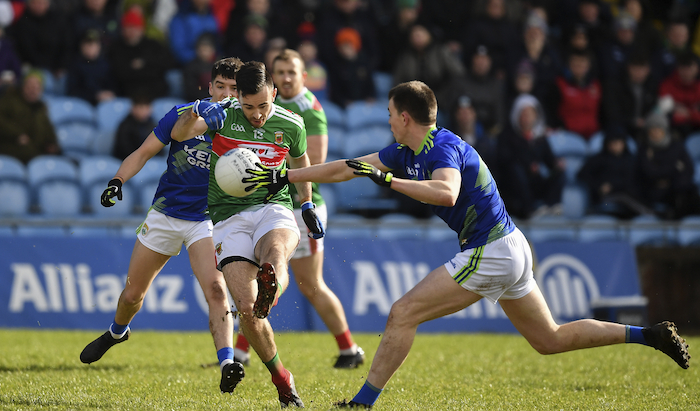 Under pressure: Kevin McLoughlin tries to get a shot off under pressure agaisnt Kerry. Photo: Sportsfile

Dara Moynihan put Kerry five clear again with a good score after Mayo were turned over in a promising attacking position. Tom Parsons pointed just after the quarter of an hour make from close range but Mayo were taking on water all over the park and struggling to keep pace with Kerry in a number of areas on the field.

Peter Keane’s men added on five more points before the break with David Clifford getting two of them, O’Shea kicking a free, Tony Brosnan getting his first point for Kerry and Michael Burns also finding the target.

As the end of normal time approached in the first half Mayo were trailing by nine points and looking in serious bother - they did manage to pull back two points on the scoreboard in injury time thanks to a brace of Kevin McLoughlin pointed frees - but it looked like it was going to be a very hard road back into this game for them.

The second half started brightly for Mayo and they didn’t let up for the entire second half, Diarmuid O’Connor pointed two early frees - but they were then reduced to 14 men for a ten minute period when Oisin Mullin was shown a black card for a trip on Clifford.

But that didn’t stop them from going at Kerry and Ryan O’Donoghue put just four between the teams with a fine effort in the 46th minute, then McLaughlin pointed to keep up the pressure and put just three between the teams.

Kerry seemed the tide a bit when Sean O’Shea points and then David Clifford got one from out under the stand to stretch their lead back out to five with less than 20 minutes to go on the clock.

Mayo kept driving on and were rewarded when McLaughlin turned over Shane Ryan as the Kerry keeper tried to play the ball out front he back, the Westport man swapped passes with Aidan O’Shea and fired the ball home from distance to make it 1-8 to 1-10 with 13 minutes of normal time left.

Kerry responded almost straight away with Diarmuid O’Connor pointing from close range - but points from Eoin O’Donoghue and Aidan O’Shea had the Mayo faithful on their feet and ready for a nailing biting conclusion to the contest. 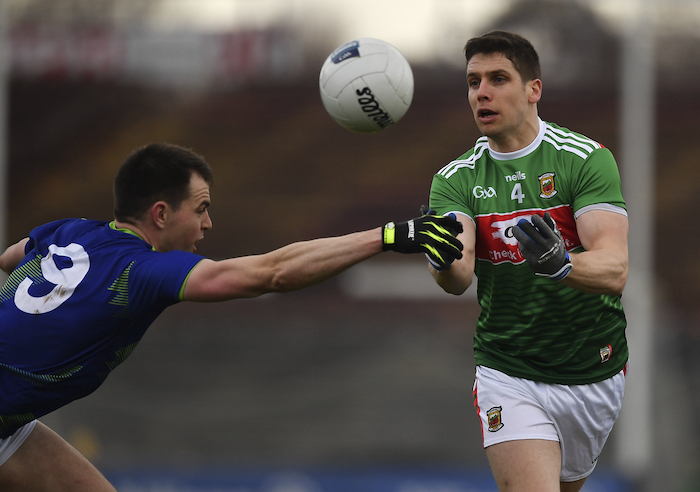 On the move: Lee Keegan tries to get a play going despite the efforts of Jack Barry. Photo: Sportsfile

Stephen O’Brien edged Kerry two clear again not long after as Mayo were just unable to get themselves level with their opponents no matter how many times they brought it back to a single point contest.

Tommy Conroy drove over Mayo’s 11th point of the day just on 30 minute mark of the second half - but it was Kerry who drove on again on the scoreboard with Paul Geaney and O’Shea kicking the next two points as the game moved into injury time.

Mayo cut the gap to two once more when Paul Towey drove over a long range free - but it looked like they were going to need a goal to win this one. Kevin McLoughlin drove over his third of the day as the fourth minute of injury time elapsed and there was still time for one more chance for Mayo to get the score they needed to secure a point.

They won back the Kerry kick-out and patiently worked the ball until a scoring chance presented itself, the ball fell to Keith Higgins who took on the shot and was unlucky to see his effort tail just past the far post and with it the game was up and Kerry took the points.

The defeat will hurt for Mayo as they know their first half performance was not up to scratch, but they will take heart from their second half showing as they move into their final two league games against Galway and Tyrone - knowing they will have to dig it out if they are to stay in the top flight.