Cork made it four wins out of four as Orla Finn’s seven-point tally gave them the edge against Mayo in the Lidl Ladies National Football League division one clash in Mallow.

With Finn and Aine O’Sullivan on song Cork kept in touch after a strong Mayo start, while Libby Coppinger’s goal early in the second half kickstarted their powerful finish.

Cork made six changes from the side named during the week, but it mattered little as they went back to the top of the table and are on course to reach the final as they bid to retain their title.

Despite playing against the slight wind Cork got off to the better start with Finn opening the scoring in the second minute and she doubled Cork's advantage from a free with seven minutes played.

But from the re-start Mayo took the lead when a sweeping move up the field saw Mary McHale take on the Cork defence before setting up Lisa Cafferky for a goal.

Aine O'Sullivan had Cork back on level terms, but at this stage Mayo were dominating and McHale had them team in front after 17 minute with a great long distance point. 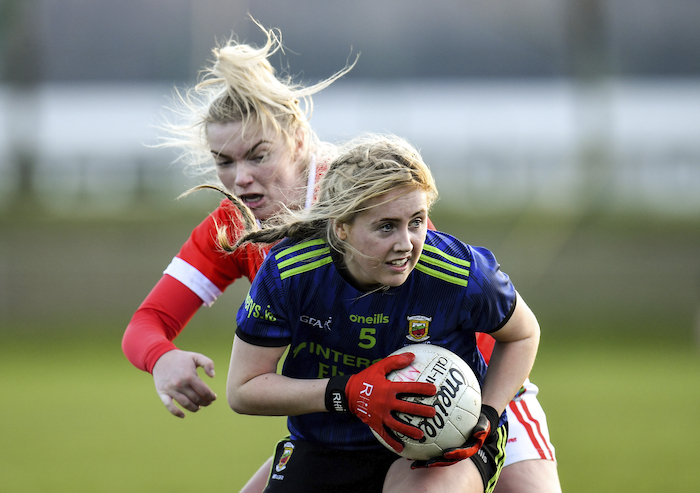 On the turn: Éilis Ronayne looks to set up and attack for Mayo against Cork. Photo: Sportsfile

Finn soon had the sides level again, but seven minutes from the break Mayo lost Roisin Durkin with a leg injury. But they didn't let it affect them, and Lisa Cafferky put them back in front, 1-2 to 0-4.

Cork were unlucky not to get a goal of their own when Melissa Duggan made a great run but Mayo keeper Aishling Tarpey got a touch to her shot to see it go out for a 45. Sinead Cafferky got the last score of the half to increase Mayo's lead to 1-3 to 0-4, but there was still time for some drama.

First Aine O'Sullivan was sent to the sin bin for Cork and she was soon followed by Maria Reilly for Mayo as both sides finished the half with 14 players.

Some readjustments in the Cork dressing-room at half-time saw a much improved performance from them after the break and now playing with the slight wind they started to dominate.

They visibly upped their game and four minutes in Aisling Hutchings had the Mayo lead down to one. With 36 minutes gone Cork were in front when a brilliant one-two between Coppinger and Sadhbh O'Leary, saw the former find the back of the net, to make it 1-5 to 1-3.

Finn added two from frees, before Lisa Cafferky pointed from a free for Mayo, their only score of the half.

Cork continued to dominate, with Saoirse Noonan increasing their lead and two more frees from Finn had them 1-10 to 1-4 up, with four minutes left to play.

Two late scores from Aine O'Sullivan rounded off the scoring as Cork ran out deserving winners and move back to the top of the table.