A brave and battling performance by Mayo saw them earn a hard fought draw against Galway in the Connacht Final in Castlebar on Sunday evening.

Peter Leahy’s side looked to be heading for heartbreak when with less than a minute left on the stop clock, Galway were award a free 40 meters out and the ball was moved in ten meters closer for dissent.

The ball was placed in the hands of Galway captain Tracey Leonard, but she skewed her effort short and to the right and the ball was cleared by Mayo as the hooter went.

Mayo did very well to hold out for the final ten minutes as they were reduced to 14 players when team captain Niamh Kelly was sent off on a straight red card for a sliding challenge on Galway’s Aine McDonagh.

But they will rue themselves a number of chances they missed in the second half including a penalty on 41 minutes from Sarah Rowe that was saved by Galway sub goalkeeper Dearbhla Gower.

The Galway number 16 came on to replace Lisa Murphy who was shown a yellow card for a charge on Fiona Doherty after she had collected a dropping ball.

Mayo trailed by 1-6 to 0-5 at the break, but hit three second half goals to give themselves a fighting chance of winning a contest they went into as underdogs against a side that had reached the division one league final in the Spring. 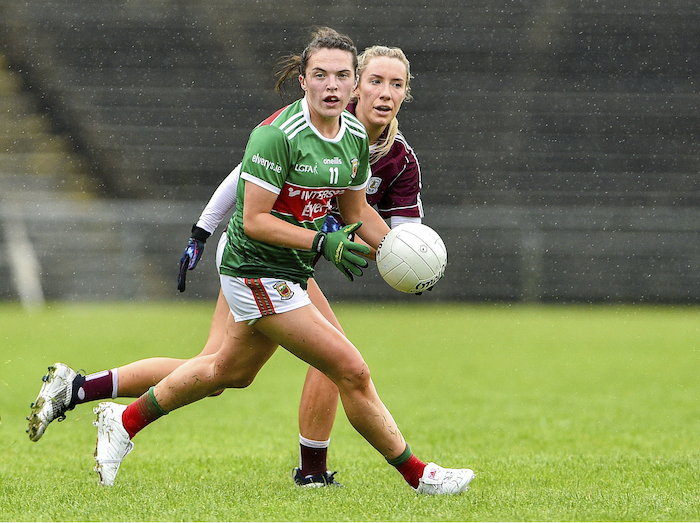 Galway increased their lead a minute after the restart when Sarah Conneally hit a point from close range, but Mayo hit back with two goals in a three minute spell.

The first one came from full-forward Rachel Kearns who followed in on an effort from Kathryn Sullivan that fell short at the back post, Kearns stuck out a leg and directed it to the back of the net.

A minute later Eilis Roynane hit Mayo’s second goal when a Grace Kelly shot dropped short, Kearns challenged for the ball with a Galway defender and it ballooned up in the air and into the path of Roynane who forced it home from close range.

That goal put Mayo into the lead for the first time in the game on a score of 2-5 to 1-7 - and it looked to be there for them to drive on and win - but Galway weren’t going to give up that easily.

Tracey Leonard, Megan Glynn and McDonagh all found their range with points and put Galway back into a 1-10 to 2-5 lead with 20 minutes to go.

Rowe missed a free on the right and then saw another effort from a placed ball drop short that led to the Mayo penalty on 42 minutes - after a long lead up she stepped up to take the penalty, but her effort was saved well by the reserve Galway keeper’

Niamh Kelly got Mayo back on track with a hard won score following a surging run through the heart of the Galway defence - Tracey Leonard responded for Galway as the game hung on a knife edge with 13 minutes to go on the clock.

Mayo looked to have hit the killer score when Emma Needham found some space and picked out Grace Kelly with a brilliant pass - the Moy Davitts attacker had plenty of work still to do, but she held her nerve and drove the ball home with power and precision to put Mayo into a 3-6 to 1-11 lead, but that was to be their last score of the game as Galway came hunting.

Mayo’s defence held out as best it could with Danielle Caldwell putting in a brilliant display for the side and picking up a deserved player of the game award, but with five minutes left to go on the stop clock Tracey Leonard fired in a effort that went over the bar after clipping the cross bar and left the game all square and there was still plenty of drama left to come.

Galway rattled the back of the net three minutes in when Louise Ward broke through the heart of the Mayo defence and hammered the ball to the top corner of the net. Mayo responded not long after through Rachel Kearns’ first point of the day from close range - Kearns caused Galway a number of problems in the first half, playing an isolated role in the full forward position and getting on a number of probing balls. 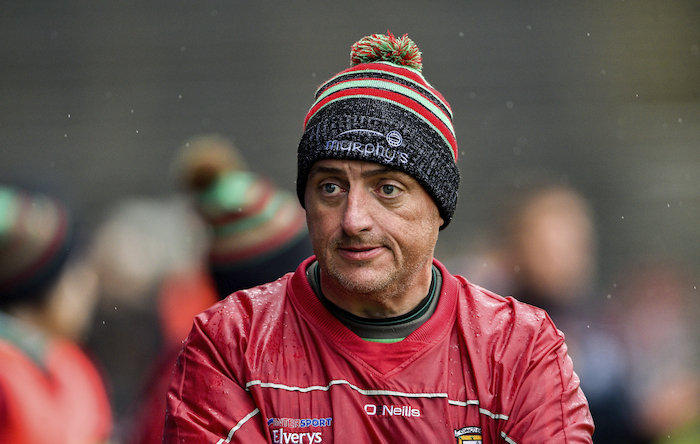 Near but not quite: Mayo manager Peter Lehy will have to get his side ready for the replay in a fortnight. Photo: Sportsfile

Roisin Leonard pushed Galway three clear seven minutes in from a close range free not long after Mayo were reduced to 14 players for ten minutes when Ciara Whyte was sent to the sin bin for a challenge on Barbra Hannon.

Sarah Rowe cut the gap back to two with a close range free from the left on 12 minutes - but Galway hit back in style with Sarah Conneally and Tracey Leonard pointing from close range.

Peter Leahy’s charges kept up their chase with Sinead Cafferkey getting in for a goal chance, but her effort flashed over the bar and that was followed not long after by a Sarah Rowe point to leave the score at 1-4 to 0-4 with 11 minutes left in the half.

Rachel Kearns bagged her second of the day to leave just two between the teams with seven minutes left on the clock in the opening half, however Galway tagged on points from a Leonard free and another from the same player after some quick thinking saw her play a neat one two from a close range free to send her side in leading 1-6 to 0-5 at the short-whistle.