Mayo picked up their first home win in league or championship since beating Donegal in 2017 on a night that won’t be forgotten by the 10,941 strong crowd - for the weather rather and the football on display.

Nobody will be able to read too much into what happened on the field as it was the quintessential game of two halves - with a gale blowing the wind and rain from the Bacon Factory end of the ground.

Roscommon played with the aid of the breeze in the first half and went in leading by four points at the turnaround and it could have been much more if they had taken all the chances that came their way over the opening 35 minutes.

Mayo struck first with Evan Regan opening the scoring three minutes in from a close range free - that was cancelled out by a Colin Compton point 30 seconds later.

Mayo were struggling to win the ball from their own kick-out with Robert Hennelly’s balls getting caught in howling gale and Roscommon were winning a fair share of primary possession.

Enda Smith edged the visitors in front from a free on the eight minute mark and a few seconds later Shane Killoran put two between the sides and two minutes later Anthony Cunningham’s men were three points to the good when Cathal Creggs goal bound effort was tipped over the bar by Hennelly.

Donie Smith hammered over a point from near the half-way line on 17 minutes which was the last score of the half. Before the break there was a bout of fisticuffs when Enda Smith and Keith Higgins came together and almost every player on the field got involved in in pushing and shoving.

Mayo had the advantage of the wind to look forward too in the second half and they ate into the Rossommon lead two minutes in when Diarmuid O’Connor fired the ball over the bar on the turn.

The Mayo faithful hoped that this would be the first stepping stone in the comeback but it took them another 12 minutes to cut further into the gap on the scoreboard.

That score came from a long range Jason Doherty free 45 meters out, the man who was making 100th appearance for the green and red then hammered over a second free from even further out another minute later to cut the gap back to a single point. 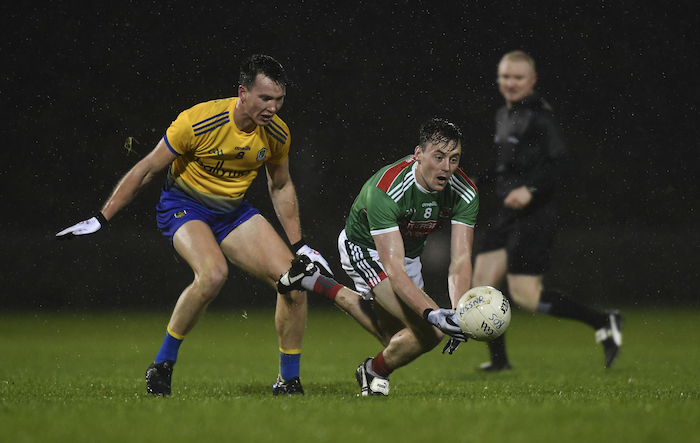 Roscommon could and probably should have grabbed he first goal of the game just before the 55th minute, when Cathal Cregg played a deft ball into the path of Colin Compton - the Strokestown attacker could have taken the goal on, but he chose to fist the ball over the bar, to push his sides lead back out to two points.

Donal Vaughan cut the gap back to a single point from the very next play - however Mayo’s cause looked to have taken a serious blow when Colm Boyle was shown a black card for a late challenge on Ultan Harney.

But Mayo actually started to play some of the best football of the game, Paddy Durcan drove over a long range score to level it up at six points each with 11 minutes to go.

A minute Mayo went back in front for the first time since the third minute of the game when Brendan Harrison popped up close in on goal and ballooned an effort over the bar - Mayo’s lead was extended not that long after when Doherty drove over his third point of the evening.

Five minutes from the end of normal time Mayo hit the score that sealed the points with five minutes to go when Brian Reape sold his man a dummy before firing it home leaving Darren O’Malley rooted to the spot.

Ultan Harney closed the gap a little bit with a close range point - but the Clann nGael’s man night came to an early end when he was shown a second yellow deep into injury time - however there was still time for Shane Killoran effort to deflect off a Mayo player and end up in the back of the net to leave just a single point between the teams at the end of the contest.

Mayo will be happy to have the two points in the bank, before the head to Omagh to take on Tyrone next Sunday.