There was no third time lucky for Mayo against Galway, as the Tribesmen came to town and went home with the win in front of a packed house of 29,449 paying spectators.

Johnny Heaney’s bullet of a goal four minutes into injury time was the vital score a tight and sometimes fractious encounter.

Mayo now have to do it the hard way once again, if they are to make it through to the All Ireland final and achieve their ultimate dream.

For Galway it is the third time in as many years they have knocked Mayo out of the Connacht championship and they will be targeting a Nestor Cup victory and what that brings come later this summer.

Mayo lost Diarmuid O’Connor to a red card before the break and not long after it Tom Parsons had to be stretched off the field with a serious looking knee injury.

But their poor return in front of the posts will be what really haunts them as they failed to break down a stubborn and well set up Galway defence that choked the Mayo attack and forced them into endless loops and recycling of the ball as they looked to find a gap to break through.

Galway led at the interval by a single point against Mayo at half-time, Mayo’s cause wasn’t helped by the sending off of Diaramuid O’Connor - who was shown to the line for a high elbow that caught Paul Conroy 28 minutes in. 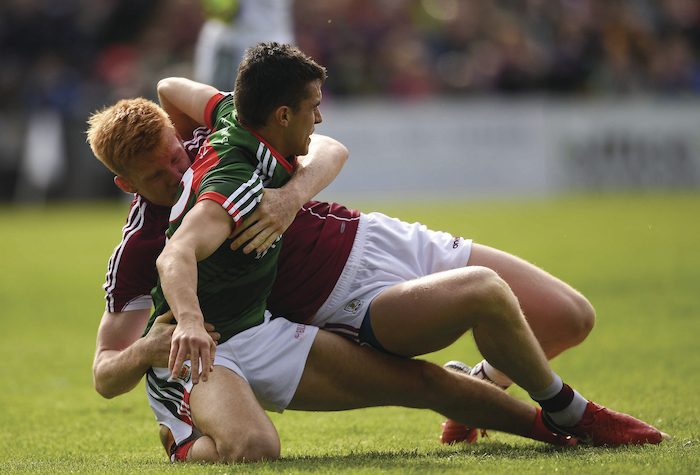 Cian Hanley made his return to Mayo colours. Photo: Sportsfile

Mayo started the game on the firmer footing with Conor Loftus putting them into the lead two minutes in from a pointed free.

Kevin McLoughlin had the chance to push Mayo two clear not long after but his free from the right hand side came back off the post and was just the first of a series of misses that blighted Mayo’s attempt to take control of the game early on.

Galway levelled it up on seven minutes through a Sean Armstrong point from close range. A minute later Damien Comer took on Chris Barrett and beat him before bisecting the posts.

The Tribesmen were two to the good on the ten minute mark when Barry McHugh slotted over his first point of the day from close range after Comer was fouled by Barrett.

The same man out three between the sides when he drove over a long range free from beyond the 45m line into the Bacon Factory end.

In between those scores Mayo missed a number of chances with Paddy Durcan, Colm Boyle and Aidan O’Shea all failing to find the target with chances they could have scored from.

Mayo landed their second point of the day on the 18 minute mark when Diarmuid O’Connor pulled the ball from the air and created enough room to fist it over from close range.

Comer kicked his second score of the day after a driving run through the heart of the Mayo defence in the next play.

Mayo cut the gap back to a single point by the 22nd minute thanks to a brace of Loftus points, the Crossmolina man had a chance to level it up from play not long after but he badly pulled his effort wide of the target. 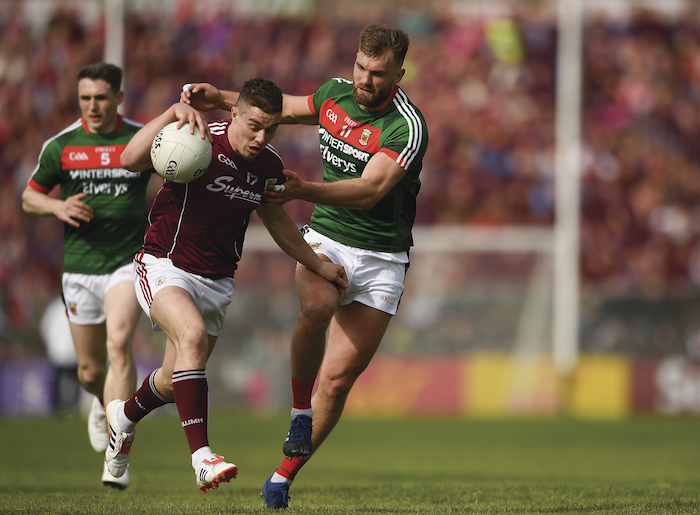 The homeside did finally bring themselves back to parity with a Kevin McLoughlin score ten minutes from the break, but as was Galway’s want they went straight back down the field and nudged themselves back into the lead with a fine score form play.

Seven minutes from the break O’Connor was shown a straight red for a challenge that saw Conroy leave the field of action not to return with his injury.

Mayo did cut the gap back to a single point before the short whistle thanks to an Andy Moran point after a neat little sidestep to create the room he needed to get the shot off.

Mayo had a chance to level it up straight from the restart - but Kevin McLoughlin’s free tailed off wide after Paddy Durcan was fouled by Eoghan Kerin.

Mayo did level it up three minutes later when Keith Higgins cut a gap through the middle of the Galway defence and fired it over the bar.

Mayo went into the lead for the first time since the opening few minutes of the game two minutes later when Tom Parsons effort just had the distance to scrape over Ruairi Lavelle’s bar.

The lead lasted less than a minute as Shane Walsh arrowed over an effort to tie it up at eight points each.

Mayo lost Parsons to a serious knee injury not long after and the game was held up for eight minutes as the unlucky Charlestown man received treatment before being stretchered off the field.

The loss of Parsons saw the introduction of Cillian O’Connor to the action and the Ballintubber man took a crack at a point within minutes of coming on but it dropped short.

A Walsh free edged Galway back in front as the game crept towards the 55 minute mark, but Mayo responded soon after with O’Connor providing a pin point pass to Andy Moran who created enough space to put the ball between the posts.

Ciaran Duggan and O’Connor swapped points over the next few plays leaving the sides locked together at ten point each as the tension level began to wrack up around the ground.

Then Sean Kelly and Kevin McLoughlin traded points with the stopwatch ticking into the first few minutes of the eight that were singled for injury time.

A goal for either side was going to be decisive at this point and the gaol went the way of the Tribesmen with subs Kelly and Ian Burke involved in a move that originated with Damien Comer taking a free from deep inside his own half and Heaney lashing it home from the McHale Road side of the ground.

There was still time for Mayo to work this one out and O’Connor put two between them with a free with three minutes of injury time left. Mayo had a chance to cut the gap back to just one on the next play, but Colm Boyle dragged his effort wide of the target.

With time ticking down Mayo tried to win the ball back from Galway without coughing up a free that would see them eat down the seconds on the clock, but Galway were patient on the ball working a move that saw Tom Flynn break through and fist the ball over the bar and seal Galway’s progression to the Connacht semi-final in a few weeks time against Sligo.

For Mayo it is the long road once more, a journey that will start in four weeks time and if they are to make it back to the All Ireland semi-final see them play seven games in nine weeks.

Is there enough left in the tank for a third magical mystery tour through the qualifiers? We have to wait and see.