On a scorching hot Bank Holiday Sunday Dublin put in a scorching first half performance to lead Mayo by double scores at the break and set up their victory in the Ladies Football National Football League division one final in Parnell Park.

Sinead Aherne was their tormentor in chief running hitting 1-5 in the opening half an hour and being at the fulcrum of panic in the Mayo defence every time she got her hands on the ball.

The All Ireland champions blitzed Mayo early doors and were 1-5 to 0-0 to the good with just over 15 minutes gone on the stop watch.

All bar one of those scores coming from the boot of the St Sylvesters sharpshooter, with Olwan Carey adding the odd point in that run.

Dublins first goal came just before the ten minute mark when Nicole Owens was fouled by Doireann Hughes and referee Brendan Rice awarded a spot kick that Aherne expertly dispatched to the back of the net despite the best efforts of Rachel Kearns in the Mayo goal.

Mayo did respond to that strike with Sarah Rowe and Fiona Doherty both slipping over points, in between those scores Mayo came close to raising the green flag themselves - but Fiona McHale’s effort was cleared off the line by Niamh Collins.

Dublin responded to those scores by upping the gears again and they reeled off another four points without reply to lead 1-9 to 0-2 with just over six minutes left to go in the half. 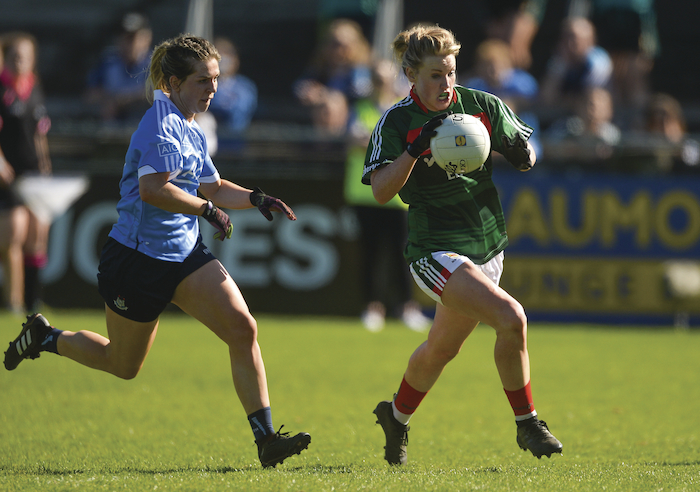 On the break: Fiona McHale looks to make a break for Mayo. Photo: Sportsfile

Mayo’s third point of the day came from Niamh Kelly whose snap shot dropped over the bar with the aid of the post with five minutes left in the half and that was quickly followed by Sarah Rowe score.

It was looking at this early stage that Mayo would need a goal to get back into the game before the break - they did manage to do that. But before the did Dublin bagged their second of the day when Laura McGinley palmed the ball home from close range after a powerful run by Martha Byrne.

Mayo’s goal came not long after when they were awarded a spot kick of their own after Fiona McHale was hauled down on her way to goal and the penalty was converted by Sarah Rowe, Grace Kelly tagged on a point in the seconds after the goal.

But the final word on the half fell to Dublin’s Lyndsey Davey who pointed from close range with less that 20 seconds left on the stop clock, to send her side in leading 2-10 to 1-5 at the short whistle. 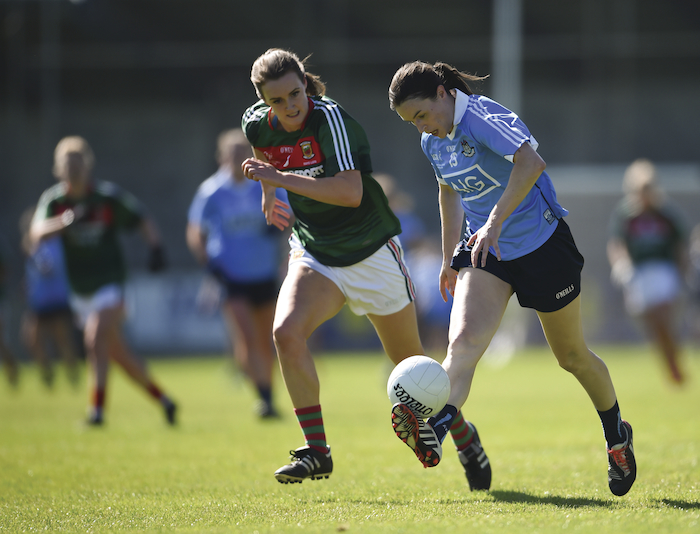 Super Sinead: Sinead Aherne was a thorn in Mayo's side all day long. Photo: Sportsfile

Mayo needed a big start in the second half, but they were caught out within minutes of the restart a Mayo free in an attacking position was intercepted by the Dublin defence and Mick Bohan’s side tore down the field at pace and ball ended up with Noelle Healy who hammered it home to seal the outcome of this one with almost a full half of football left.

Mayo kept plugging away and did manage to tag on five points before the final whistle and create a few goal chances, but there was only ever going to be one victor from the moment Dublin scored their third goal of the day.

For Mayo the league has been a learning curve under new management and playing without a number of their more experienced players and they will go into the championship knowing they have plenty to work on before they’ll hope to get another crack at Dubs in championship fare.