It’s a Long Way for Tipperary

This week, 100 years ago, British soldiers took part in the Great War battles of Doiran and Mlali. At Doiran, the British and French forces were repeatedly pushed back and finally overpowered by the Bulgarian second infantry division, while at Mlali, the British were victorious over the Germans. Victory and defeat followed each other all too frequently during the four years of the Great War.

Early misconceptions that the war would be over by Christmas 1914 quickly evaporated as battles and blockades forced more nations to choose sides and fight. The change in fortunes of the British Forces predictably led to changes in the morale of its men. British officers identified that their troops needed something to bind them, something to remind them that they would be going home to the very homes they were fighting for. For two years before the war started in June 1914, a likeable number was entertaining music hall patrons across Britain. "It’s a Long Way to Tipperary" was an upbeat song that typified the feeling among many Irish working in Britain at the time who were longing for their Irish home. At the outbreak of war the song quickly became the unofficial song of the Connacht Rangers and subsequently of all fighting Tommies of the British army.

The Woodstock of the west remembered This month marks the 35th anniversary of one the boldest and most imaginative private ventures to be undertaken in Mayo. The year was 1981 and the plan was to transform a 65 acre site outside Castlebar into the biggest two-day rock festival ever staged in the province. The proposal was the brainchild of brothers Tommy and John Staunton and local hotelier Tony McHugh. The substantial sum of £120,000 was invested in the festival with half going toward enticing major acts to play over the August bank holiday weekend.

1916 belongs to every Mayo town and village

The nationalist Irish Volunteers were established in November 1913 as a response to the formation of the unionist Ulster Volunteers in 1912. Members of the Provisional Committee of the Irish Volunteers selected areas around the country which they would visit with the aim of setting up Volunteer companies. Committee member Colonel Maurice Moore of Moorehall in Carnacon outside Castlebar chose to return to his home county to organise and mentor the men of Mayo. Moore had military experience since the 1870s with the Connaught Rangers and was well respected by both traditions.

Making sense of the census

The preliminary results from Census 2016 were published earlier this month by the Central Statistics Office and they make for interesting yet perhaps also nervous reading for Mayo folk. The latest survey of the Republic’s population, which was taken on April 24 last, was definitely comprehensive, asking detailed questions ranging from religion to the type of fuel we use. But what is Census 2016 telling us and is it worth knowing?

Mayo has a strong history of assisting refugees

In only a matter of days, the first of 86 weary, desperate, human beings will arrive in Mayo as refugees from war ravaged Syria. That figure is made up of 20 families, of which sadly, more than 40 are young children forced to live a life that no child should ever know. They are escaping a complex war being fought by President Bashar al-Assad's government, Syrian rebel groups, ISIL, and foreign allies on both sides. That Mayo is one of only eight counties taking part in this resettlement programme should come as no surprise. Our county's history of reaching out to and accommodating suffering populations is a trait of which we can be proud.

One month after WWI began in July 1914, Germany invaded Belgium. Western Belgium in particular became the scene of some of the most violent battles of the war. The result was an exodus of Belgians, fleeing for their lives. By October, Castlebar Urban District Council was debating housing Belgian refugees in the town's military barracks. The council moved quickly and the first Belgian refugees arrived in November 1914.

The County of the Yew and its Love of the Dew Recent reports that the pub trade is clawing its way back from a near 10 year decline will be welcome news for town centres. The hardest years for the industry were between 2007-2012 when some 950 pubs closed throughout Ireland. Even at its lowest point the industry was still providing over €2 billion in quietly received VAT and excise receipts to the State.

Has our best summer month just left us?

In terms of Irish summer months, June was very good to us. June does make a case for being Ireland’s best summer month. The highest temperature ever recorded in Ireland was 33.3°C at Kilkenny Castle in June 1887. One of the highest temperatures recorded in Mayo since the early 1940s was 30.5°C, recorded at Claremorris in June 1983. What is in store for us weather-wise in the coming months? There are alternative forecasts to RTÉ’s nightly offering which often seems to hedge its bets and contradict itself by the end of the broadcast. Long before Evelyn Cusack appeared on television, local folklore determined what weather may be expected.

Being a largely rural county, it was commercially important for Mayo farmers to be able to predict the weather prior to the rise in popularity of radio announcements in the late 1920s. Our agricultural calendar is affected by the whims of an erratic Atlantic Ocean which often throws up four seasons in one day. It was important farmers had their own forecasting methods to fall back on. In 1949, a Mayo journalist thoughtfully shared these methods of local forecasting with his readership.

Oh the Green and Red of Iceland! No sooner had Ireland’s impressive Euro 2016 campaign come to an end in sweltering Lyon, but I was looking for another bandwagon to hop on. Iceland’s plucky unbeaten run through the group stage had already caught my eye and after their deserved win against England on Monday night it was decided, the Nordic republic would have my full support. 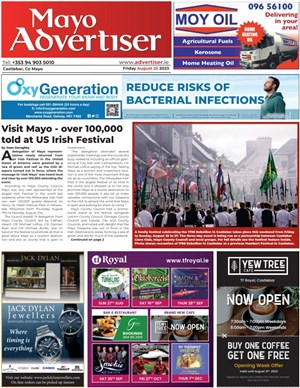