We never do it easy, do we.

Kevin McLoughlin’s late, late injury time point kept Mayo in division one for another year at the end of an enthralling encounter in Ballybofey.

It looked like Mayo were heading for the trap door for long periods of this game, but when it came to the crunch Mayo stood tall and found it within themselves to dig it out when it mattered.

Mayo hit the ground running early on in this one and raced into an early 0-5 to 0-1 lead with Andy Moran landing three scores along with points from Jason Doherty and Kevin McLoughlin.

Moran’s second and third points could have been goals, with his first coming after Diarmuid O’Connor’s goal effort was well saved by Shaun Patton and the other after he was picked out by Conor Loftus inside the cover but he blazed his effort over the bar.

That score kicked life into Donegal and they went on to kick seven points on the spin in 16 minutes with their late addition to the starting line up Patrick McBrearty lighting up the game with two brilliant efforts from play. 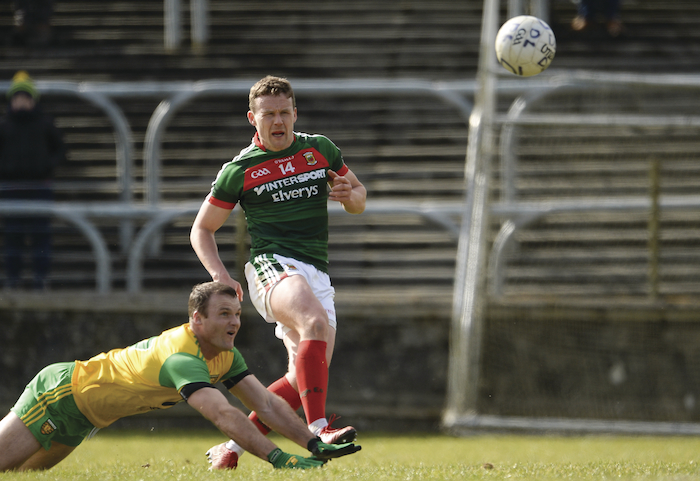 Up and over: Andy Moran shoots for goal. Photo: Sportsfile

That run put Donegal 0-8 to 0-5 clear - that run was stemmed by a Conor Loftus free, the young Crossmolina man kicked seven during the game and was a vital cog in Mayo keeping their top flight status.

Donegal did add on another point before the break through McBrearty and send them in leading by three at the break and Mayo knowing that they needed a massive final 35 minutes.

Loftus got things going after the restart with a close range free, that was responded to by a excellent effort from Michael Murphy who had a stormer of a game for the home side.

Ten minutes into the second half Loftus kicked a massive pointed free from beyond the 45m line to keep Mayo in touch, but that was quickly replied to by a McBrearty placed ball for his side.

The Crossmolina man kept driving Mayo on and he split the posts with a great score from play and then landed another point from close range to leave just one between the sides and give Mayo the chance they needed.

However, Donegal bit back and Jamie Brennan and Odhran Mac Niallais landed two excellent points to stretch Donegal’s lead back out to three points with eight minutes left on the clock. 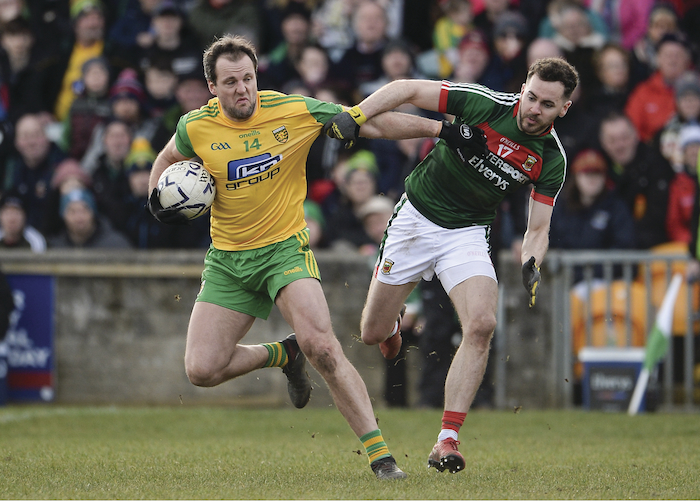 It was coming down to the wire and Mayo couldn’t afford any more slip ups, Loftus slotted over his last point of the day from a close range free after Aidan O’Shea was fouled.

Eoin O’Donoghue held his nerve to drive over a point on the run from down the right hand side under pressure as the game moved into the second minute of the four minutes of added time.

There was still a chance for Donegal to seal it when Patrick McBrearty got some space inside the back line, but he undercooked his effort and it dropped short.

Mayo still had to hold their nerve and they did brilliantly, working the ball from deep to the steady hands of Kevin McLoughlin who hammered the ball over the bar and ensured that Mayo stayed in the top flight for another year.