It all comes down to next Sunday for Mayo.

If they are to survive for another year in the top flight of the national football league - they will have to at least take a point from their trip to Donegal.

After the highs of last weekends big win over Kildare, Stephen Rochford’s side were brought right back down to earth by a teak tough Tyrone in MacHale Park, leaving Mayo winless at home in the league this year.

The sight of thousands of Mayo supporters leaving the ground well before full time is something that Mayo have not been accustomed too in recent years, but with a good ten minutes left in normal time - the crowd had begun to well thin out.

The loss of both Cilllian O’Connor and Lee Keegan to injuries early in the game is something that will have Stephen Rochford worried over the next few days and beyond as he prepares his side for the winner takes all battle in Donegal next Sunday.

Mayo made three changes to the starting team from the one announced on Saturday night with David Clarke, Tom Parsons and Cillian O’Connor all coming into the starting 15 for Rob Hennelly, Michael Hall and Seamus O’Shea.

They also made three additions to the bench with Donal Newcombe, Paddy Durcan and Conor O’Shea coming into the reserves in place of David Drake, Ger McDonagh and Danny Kirby.

The pitch in MacHale Park was heavily sanded and clouds of sand could be seen kicking up off the turf early on as players ran through certain areas or tried to bounce the ball. 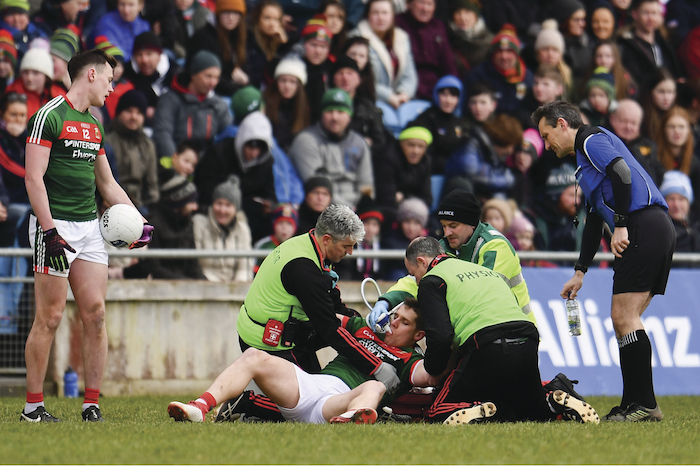 But it was no beach holiday for Mayo as Tyrone fronted up and outplayed a Mayo side who never got going. Of the eight points they kicked only one came from a starting outfield player and that was Tom Parsons point which made it one point each after two minutes.

Mayo went from Parsons second minute point until the 42 minute of the first half without raising a white flag and by that time Tyrone had managed to tag on seven more scores to Mattie Donnelly’s first minute effort.

Conor McAliskey kicked his sides second point from a long range free on the eight minute mark and Mayo lost the elder O’Connor two minutes later after he went down holding what looked like his knee and was replaced by Conor Loftus.

The Ulster side then began to stretch out their lead, with Niall Sludden kicking their third point of the day, which was quickly followed by a brace of Donnelly points from play.

On the 17 minute mark, Colm Boyle picked up a yellow card for a challenge on Hugh Pat McGeary - which saw the Tyrone defender have to leave the action with what looked like a serious leg injury.

That was followed up seven minutes later by Lee Brennan point when the action resumed to send Tyrone five points clear. Frank Burns put half a dozen between the teams not long after with a long range effort.

With nine minutes of action left in normal time in the the first half Colm Cavanagh’s day was done when he was shown a black card for an off the ball incident spotted by Deegan and three minutes later Mayo were reduced to 14 when Boyle was shown his second yellow card for a foul on Mark Bradley.

Lee Brennan bisected the posts from the resulting free and Tyrone were seven clear and a man up. But that man advantaged lasted all of two minutes, when Padraig McNulty was shown a straight red card for a foul on Lee Keegan that forced the Westport man out of the action, with his arm worryingly tucked up in his jersey as he was escorted off the field by the medics.

But that was far from the end of the drama as Andy Moran reacted angrily to a free being given against him when under pressure and he was shown a black card for his actions by the Laois referee as the game slipped into the ten minutes of additional time played in the first half.

Tyrone should have got in for a goal on 39 minutes when Michael McKernan found himself in behind the Mayo cover. He shot for goal, but his effort was well saved by David Clark, with Eoin O’Donoghue completing the clearance pawing it off the line and then colliding with the post for his troubles. 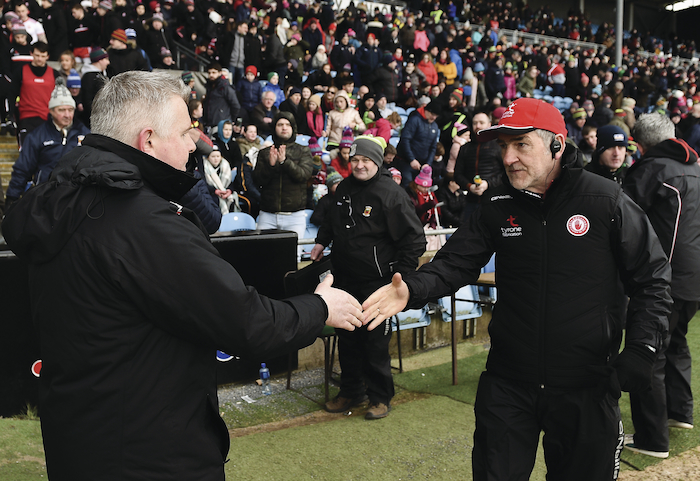 Mayo did manage to tag on two late, late points before the turnaround both from the boot of Loftus after Diarmuid O’Connor had been fouled on each occasion.

Those scores sent Mayo in trailing by just five points at the end of a hectic three quarters-of-a-hour of football.

The second half started off with Mayo cutting the gap to just four points, when Loftus kicked his third of the day from close range after Aidan O’Shea had done very well to keep a ballooned effort from a Loftus free in play.

But that was as good as it got for Mayo as Tyrone hit straight back with the first goal of the day from Lee Brennan who was spotted inside by Peter Harte. He sold Ger Cafferkey a dummy before firing it past Clarke to put Tyrone seven clear and again and leave them home and hosed.

They went on to stretch their lead out to 1-13 to 0-4 before Mayo managed to raise the white flag for the fifth time through Fergal Boland eleven minutes form time.

By that stage the Mayo management knew the game was up for this one, with key players like Diarmuid O’Connor, Aidan O’Shea and Jason Doherty being withdrawn well before the end - as bigger battles lie in wait.

The final say on the game was left to Tyrone sub Conal McCann who plundered his sides second goal two minutes before the end of normal time to stretch out their lead again and secure their status in the top flight for another year at least.

For Mayo, it all rests on what happens next Sunday in Donegal and win or a draw will see them safe, but with an ever improving Galway side coming up in the not to distant future - they will want to lay down a marker to show they are not a fading force that some might like to predict they are.