Mayo got back to winning ways in impressive style in Newbridge on Sunday afternoon with a seven point win over Kildare.

The seven point gap at the end could have been much bigger, but Mayo failed to take a number of goal chances that presented themselves in the final 35 minutes.

That will not be of much concern to Mayo though as getting the win was the vital thing ahead of this encounter against the Lillywhites.

The direction of the game turned in the final few exchanges of the first half when Aidan O’Shea found the net with a close range punch and Diarmuid O’Connor hit a brilliant score to turn what looked like was going to be a one point lead into a five point advantage at the turn around.

The game started off well for Mayo with Cillian O’Connor, Any Moran and Hennelly kicking early scores to put them three up.

Kevin Feely and Kevin Flynn responded for the homeside inside the first 12 minutes as the game started to find its feet and Kildare did have a chance to rattle the Mayo net 13 minutes in when Daniel Flynn found Niall Kelly inside the cover, but his shot was well saved by Hennelly.

Cillian O’Connor edged Mayo back in front with his second pointed free of the day 14 minutes in and Diarmuid O’Connor kicked his sides fifth of the day just afterwards, with Paddy Brophy responding for Kildare not long after.

Kildare went into the lead 21 minutes in when Daniel Flynn managed to run right across the face of the Mayo rearguard without a hand being laid on him and fire the ball to the back of the net.

Mayo missed three chances to cut the gap not long after, with both Lee Keegan and Andy Moran dropping efforts short. 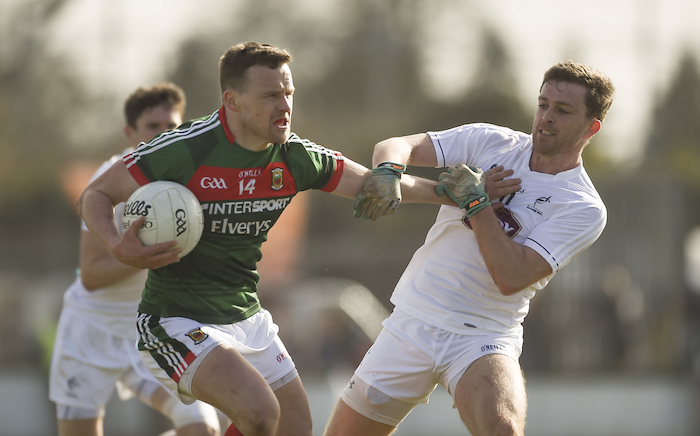 Out of my way: Andy Moran looks to find space. Photo: Sportsfile

Cillian O’Connor then missed a easy free and landed one from play, before the Ballintubber man drilled over a great score from well out the park to the delight of the large travelling Mayo contingent.

Adam Gallagher kicked Mayo back into the lead with a nicely taken score are Kevin McLoughlin sent him clear - but they were still to hit their big scores that set them well up for victory and the two vital league points.

The goal came from the fist of O’Shea, but it was the good work in tight spaces by Andy Moran and Lee Keegan that created the chance for the big Breaffy man and that was quickly followed by a sumptuous point from the younger of the O’Connor brothers to close out the half.

The second half opened up with Kevin Feely kicking the first score inside the opening minute, but Mayo responded in style with points from Gallagher and Moran to push Mayo into a 1-11 to 1-5 lead.

Kildare responded with two points on the bounce from Niall Kelly and Fergal Conway to close the gap back to six points - but they could never get in touching distance of Mayo a the game played out to a now inevitable conclusion over the final 20 minutes, with both sides hitting little scoring bursts down the home straight.

Mayo move on to next weekends meeting with Tyrone knowing that a win should see them safe in the top flight for another year.

One of the most pleasing things for Stephen Rochford coming out of this game will be the spread of scorers with nine different players getting on the scoresheet and six of them getting two points or more over the 70 minutes.