Robbie Hennelly’s injury time penalty save from Ciaran Murtagh was the last act in Mayo’s five day trilogy of games in the FBD League as Kevin McStay’s side ran out three point winners in a bitterly cold Hyde Park - as for the second time in three days, Mayo failed to take advantage of their opponents having a man sent off.

Roscommon were reduced to 14 men just two minutes into the second half when Ian Kilbride was shown a second yellow for a clumsy challenge that resulted a free that was converted by Fionn McDonagh to pull Mayo level, that was followed up a minute later by a Conor O’Shea that put Mayo into the lead for the first time.

But Rosommon kicked back with two quick points of their own through Ian Kibride and Diarmuid Murtagh to edge back in front with 41 minutes gone on the clock. A Conor Daly point that just crept over edged his team a further point in front not long after.

Ciaran Treacy cut the gap back to a single point with a well taken effort on 46 minutes, but two minutes later Diarmuid Murtagh kicked the score of the game with an outside of the boot effort from a free tight to the stand side of the field to leave the gap at two points. Murtagh tagged on another pointed free to push his side three clear and with five minutes left in normal time they were four clear when Ciaran Murtagh tapped over a close range free.

Mayo kicked their first score in 21 minutes when Neil Douglas became the sixth of the Mayo starting forwards to raise the white flag, but for the time between that score and the one previous Mayo barely threatened the Roscommon defence as they struggled to deal with playing with an extra man for the second time in three days. 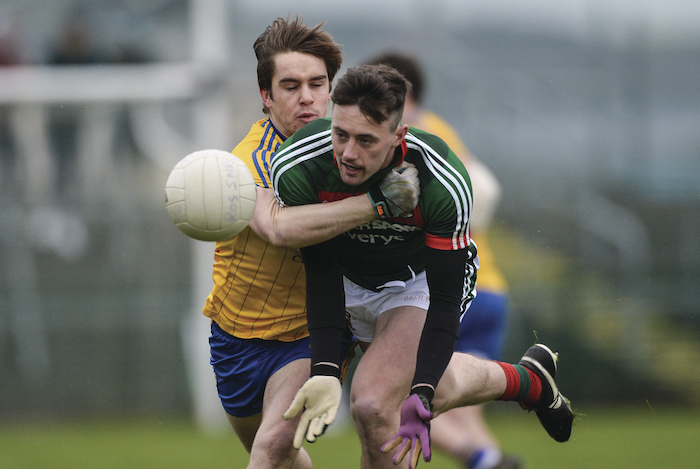 Roscommon went in leading by a single point at the end of an entertaining first half, that from a Mayo perspective was lit up by Westport’s Fionn McDonagh who kicked three points in the opening 35 minutes.

Roscommon led by by three points after ten minutes with brother Conor and Niall Daly kicking the opening scores as a new look Mayo tried to get used to playing together. Further points arrived for the hosts from the boots of Ciaran Murtagh and Niall Kilroy with McDonagh’s responding from a free for Mayo.

Paddy Durcan who put in a storming performance for Mayo kicked their second score of the game with a effort from well out the field to cut the gap back to two on 12 minutes. But Roscommon came back at Mayo and led 0-6 to 0-3 after 20 minutes with Sean Mulloly and Ciaran Murtagh tapping over points.

Mayo responded in that run with a well taken free from 45m by Jason Doherty, but the same man dropped another effort short and Stephen Coen also put one the far side of the post when he really should have done better.

Diarmuid O’Connor kicked Mayo’s fourth point of the day with long range effort as Stephen Rochford’s men began to find their feet in the contest and they reeled off three more points before the break with McDonnagh kicking two fine scores from play and Ciaran Tracey slotting one over from close range. Roscommon kicked back with a brace of scores from Diarmuid Murtagh and his second point from a free right on half time sent his side in leading by 0-8 to 0-7 at the turn around.