If only we could see these two sides go toe-to-toe in the height of summer, rather than in the gloom of November with a constant mist seeping into the bones of those in action on the field and the hardy souls in the stands.

Over the past half a decade these two behemoths of the club game in the province have faced off on four occasions and the roll of honour from that run, now stands at two wins each with the Galway men winning the last two meetings, both of which went to extra time.

With little over ten minutes left to go in normal time in this one, it didn’t look like there wound be any need for the additional 20 minutes with Corofin in cruise control and leading by four points. They started a move in their own full back line that went through at what must have been least 30 pairs of hands before it was worked into Colin Brady, who rather than tap it over and seal the win opted to go for goal, but his effort was blocked down and gave Mitchels the hope they needed.

This Castlebar team have shown they only need a fighting chance to win tight games over the past few years and they took that chance and ran with it outscoring Corofin 0-5 to 0-0 over the final ten minutes of normal time and the five additional minutes that were play by referee Marty Duffy.

In those five minutes Neil Douglas tapped over a brace of point, David Stenson hit two from play and two minutes after the end of the signalled three minutes of injury time the 25-year old Stenson held his nerve to slide over the levelling score after Douglas had been fouled by a desperate Corofin rearguard. 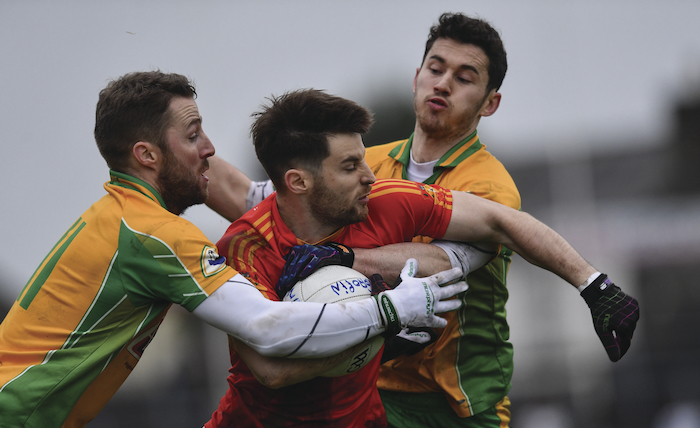 But when it came to extra time, the Galway champions were able to find the extra gears they needed to drive on to victory. They ran their bench in the final stages of normal time and resisted to the temptation to bring back on some of the starting string they had replaced down the home straight for the second serving of this tasty encounter.

Gary Sice got things moving when he took advantage of the ball breaking off the chest of Eoghan O’Reilly as daylight began to fade fast in the north Galway venue. That was followed by points from Ronan Steede, the impressive Jason Leonard who finished the day up with five points. Corofin were also able to miss a penalty in that opening half of extra time with Rory Byrne saving from Justin Burke after Sice had been fouled. Mitchels only score of the half came from a Stenson free and they went in trailing by 2-10 to 1-11 heading into the final ten minutes. Mitchels had to get some early scores in the opening exchanges of the final section of the game to get themselves back into it, but it failed to transpire with Sice stretching the lead out to three early on and Barry O’Donovan making it four and then Martin Farragher who came back on for the final minute putting five between the sides, before Douglas tapped over his fifth of the day with the final kick of the game.

The contest roared into life early on with Aidan Walsh finding the back of the net three minutes in after brilliant move down the right wing that saw Cian Costello, Neil Douglas and Danny Kirby involved. Corofin hit back with two goals of their own in the half with Colin Brady firing the home the first after nine minutes and Michael Lundy the second. He showed some neat footwork to skip around Rory Byrne after Ian Burke took a quick free to play him in. That goal sent Corofin in leading 2-4 to 1-3 at the break, but little did we know what was about to unfold in front of use over the next hour or so.