Our rolling coverage of Storm Ophelia throughout the event

Storm Ophelia has passed and Mayo escaped the worst of the effects of the storm with some road closures and minor flooding incidents the most damage that was reported during the event.

With Hurricane Ophelia expected to make landfall today, the county - especially on the costal areas are on high alert. A red weather warning had already been issued for a number of counties including Mayo, but that warning was extended nationwide on Sunday evening. The Department of Education also ordered that all schools and third level institutions will remain shut for the day. 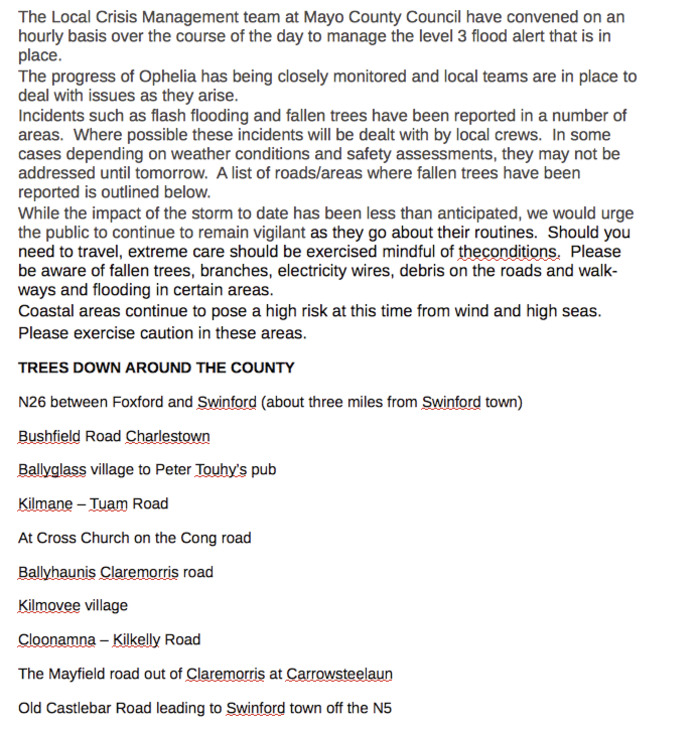 Following careful consideration by the National Emergency Coordination Group, the Department of Education and Skills, has decided that all schools will remain closed tomorrow #Ophelia

The worst of the storm is expected to hit Mayo in the next few hours as the storm moves past the west coast.

The power outage in Cong has been fixed

Power has been restored to Cong residents #Ophelia pic.twitter.com/9DWQX1UgqP

There are power outages in a number of areas around the county, you can keep upto date on them at https://www.esb.ie/esb-networks/powercheck/ 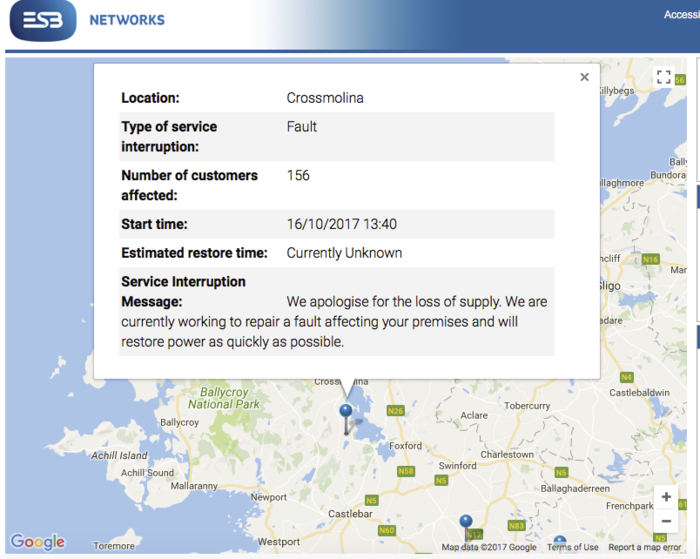 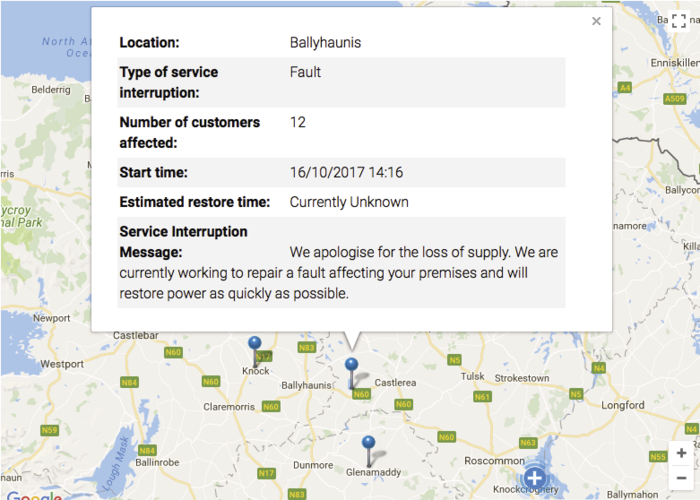 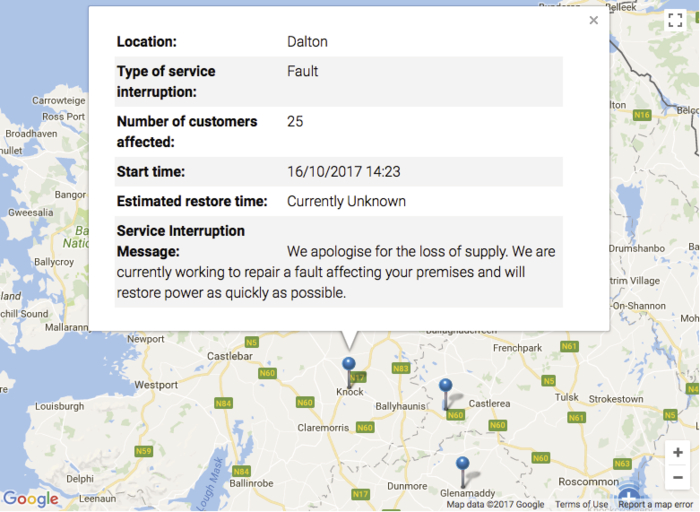 There are also reports of fallen trees on the Castlebar to Hollymount Road at between Ballyglass and Newbrook and at Rathgranagher, Hollymount on the L1610 between Claremorris and Shrule - according to Mid West Radio.

1,000 homes in Cong without power at the minute.

We spoke to Mayo County Council; Chief Executive Peter Hynes this morning about the councils plans for the day and their advice to the public.

“Mayo County Council has implemented a level three flood response. This means that the flood emergency plan has come into operation and arrangements are in place in areas of the County that may be at higher risk. The first meeting of the local crisis team was convened yesterday afternoon, Sunday October 15. This team are in place in County buildings and will remain in place until such time as the level three response has been stepped down.

The day to day services of Mayo County Council are stood down. We are operating in an emergency response mode. A Core Staff will remain in place in the following offices

"Please note it is only possible to deal with calls in relation to the weather emergency at this time. We are urging the general public to be careful as they go about their daily routines. Should you need to travel, extreme care should be exercised mindful of the conditions. Please be aware of the potential of fallen trees, branches, electricity wires, debris on the roads and walk-ways and flooding in certain areas. Coastal areas pose a very high risk at this time from wind and high seas. Please exercise extreme caution in these areas. We would like to ensure the public that Mayo County Council will update you with further information as appropriate over the hours ahead and would request the co-operation of the Public until such time as the storm has passed."

"Irish Water has incident plans in place and crews on standby to deal with the effects of Storm Ophelia. Irish Water recognises that the predicted conditions are likely to result in power outages at critical water and wastewater installations which could compromise service delivery. Heavy rainfall may also increase the risk of flooding.

"Power outages may impact the operation of our water treatment plants which would compromise the safety of drinking water. Where risk arises, working with the HSE, Irish Water will impose precautionary Boil Water Notices as necessary.

"Irish Water is collating information on outages and other issues and will be updating our website constantly during this crisis. We envisage that crews will be unlikely to be able to respond to breakdowns in plants until it is safe to do so and this may lead to a loss of service for a period. However Irish Water and Local Authorities crews will respond as quickly as possible to restore services when it is safe to do so.

"If you have issues with your water supply please view our service supply map on water.ie, visit twitter at @IWCare or call us on 1850 278278. We would appreciate if members of the public would only call if there is an emergency as there are staff shortages in our call centre in Cork today. If there is a high volume of calls there may be some delay in getting through, we are grateful for your patience and cooperation."

Ireland West Airport Knock this morning announced a number of cancelations to filghts in and out of the airport today.

For the full list of cancellations & advice on rebooking flights/refunds check out our dedicated #ophelia page here https://t.co/76XRkXahE5

Ireland West Airport Knock have annouced that all Ryanair flights in and out of the airport have been canceled for tomorrow.

.@Ryanair regret to advise customers due to adverse weather on 16th Oct, they have been forced to cancel their flights to/from @Irelandwest

Bus Eireann has announced that it has cancelled all bus services nationwide from 5am to 2pm tomorrow and that some services may resume in the afternoon.

In a revised weather warning issued on Sunday night Met Eireann said, “Ophelia is forecast to track directly over Ireland during daytime Monday. Violent and destructive gusts are forecast with all areas at risk and in particular the southwest and south in the morning, and eastern counties in the afternoon. Also heavy rain and storm surges along some coasts will result in flooding. There is potential risk to lives.”

Mayo County Council has implemented a level three flood response. This means that the flood emergency plan has come into operation and arrangements are in place in areas of the county that may be at higher risk. The first meeting of the local crisis team has been instigated and this team will remain in place until such time as the level three response has been stepped down.

The council have urged the general public to be careful as they go about their daily routines tomorrow and advised that “should you need to travel, extreme care should be exercised mindful of the conditions. Please be aware of the potential of fallen trees, branches, electricity wires, debris on the roads and walk-ways and flooding in certain areas. Coastal areas pose a very high risk at this time from wind and high seas.” The council also postponed their monthly meeting that was due to take place tomorrow because of Hurricane Ophelia.

The HSE have also cancelled all outpatient appointments for tomorow in a statement this evening they said that  - Due to the upgrading of the “Red” weather warning by Met Eireann to the whole country as a result of storm Ophelia, patients need to take note of the following.

"Outpatients: all hospital outpatient appointments are being cancelled tomorrow Monday 16th October.  Consequently, patients do not need to attend or contact the hospital and they will be rescheduled as soon as possible.

"Scheduled/planned procedures: Patients who are scheduled to have a planned procedure can contact the hospital in the morning to confirm if their procedure is going ahead. In order to minimise unnecessary travel risks for patients, only urgent procedures will take place tomorrow.

Due to the weather warning only essential community services will operate tomorrow. If you are scheduled for a community service tomorrow please make contact with your service in the morning to see if it is proceeding. For all other non HSE day and community care services, please contact the provider of those services directly. Our emergency departments and National Ambulance Service will operate as normally. Priority will be given to the most urgent cases. The HSE Crisis Management Team has been activated and each local area is working as part of the Area Crisis Management Team in conjunction with the Gardai and other services."

Ireland West Airport Knock said this evening that “Passengers are advised to check with their airlines for the most up to date flight information before coming to Ireland West Airport tomorrow, Monday, October 16. As it stands currently all our flights are scheduled to operate tomorrow but this maybe subject to change - passengers are advised to contact their airlines for the latest information regarding their flight status.”

An Garda Síochána renewed their appeal to all motorists and members of the public to not make any non-essential journeys saying “There should be no cycling and drivers of high sided vehicles and motorcyclists should also be aware of the extreme danger posed by gale force winds as they are particularly vulnerable. The also added that “It is envisaged that there will be significant damage caused by winds, especially in the nature of fallen trees and downed power wires.  Please assume that any fallen wires are live and do not approach or touch the wires.  Please report any fallen wires to the emergency services”

The Coast Guard have also made a requested to members of the public to avoid any visits or walks to coastal or cliff areas.