Another Sunday in Croke Park and another heart-breaking defeat for Mayo against Dublin in an All Ireland final. This time it was the Mayo Ladies who came up short against the Dubs’ who ran out 4-11 to 0-11 winners against a battling and brave Mayo team.

Dublin were deserving winners on the day, but a late three goal run saw them put a gloss on the scoreboard in a game that was still in the melting pot with less than ten minutes to go with Dublin leading by just three points when Grace Kelly kicked Mayo’s tenth point of the day. But once Sarah McCaffrey hammered home Dublin’s second goal, just after Orla Conlon had been given an yellow card and saw Mayo reduced to 14 for the rest of the game, it was always going to be tough for Mayo to pull back in Mick Bohan’s side. Mayo went chasing goals and Dublin caught them on the break with Carla Rowe and McCaffrey both putting the ball in the back of Yvonne Byrne’s net in the final two minutes to give Dublin a 12 point win in front of a record crowd of 46,286 paying spectators. 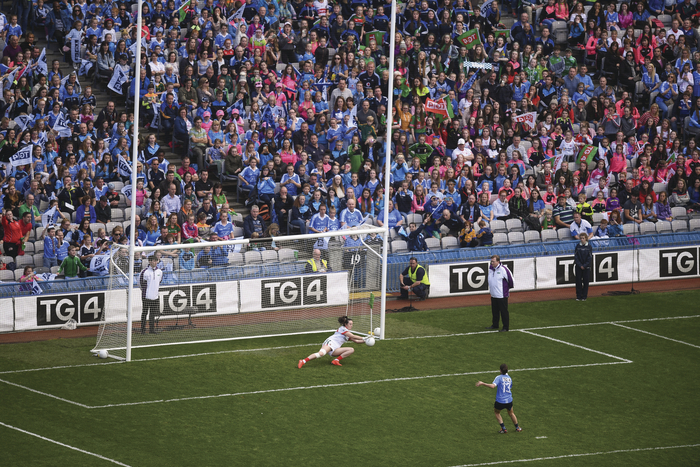 Instant impact: Aisling Tarpey pulls off a penalty save with her first involvment in the game. Photo: Sportsfile

Mayo started the game well, pushing up on Dublin and taking the game to them as the teams went score for score with Sinead Aherne and Cora Staunton going point for point in the opening few minutes to leave it level at 0-2 to 0-2 after ten minutes. The St Sylvester’s attacker kicked two more points for Dublin over the next five minutes with Niamh Kelly and Cora Staunton replying for Mayo. The Carnacon ace will feel that she could have done better with her finishing, missing a number of chances in the first half and forcing a few efforts that missed the target when she could have recycled the ball.

The teams were level at five points a piece when Grace Kelly swung over a fine score with 11 minutes left to go in the half, then 30 seconds later Dublin had the ball in the back of the Mayo net for the first time, when Niamh McEvoy finished from close range after Mayo got muddled up in the middle of the field and Dublin broke with pace to set up the full-forward inside. Staunton cut the gap back to two points not long after and it was stretched out to three again by a McEvoy point.

Shortly after that Mayo were about to get their first sin-binning of the day. Yvonne Byrne was shown yellow for taking down Aherne as she was going through on goal and referee Seamus Mulvihill awarded a penalty kick. That card forced Mayo into taking off Ciara Whyte and brining on sub goalkeeper Aisling Tarpey who with her first involvement in the game pulled off a fine save from Aherne to keep Mayo alive. The Mayo cause was hurt even more when with four minutes left in the half they were reduced to 13 when Rachel Kearns was shown a yellow card and it was backs to the all stuff as Frank Browne’s side tried to get to half time. They managed that superbly and went in trailing by 1-6 to 0-6 at the short whistle. 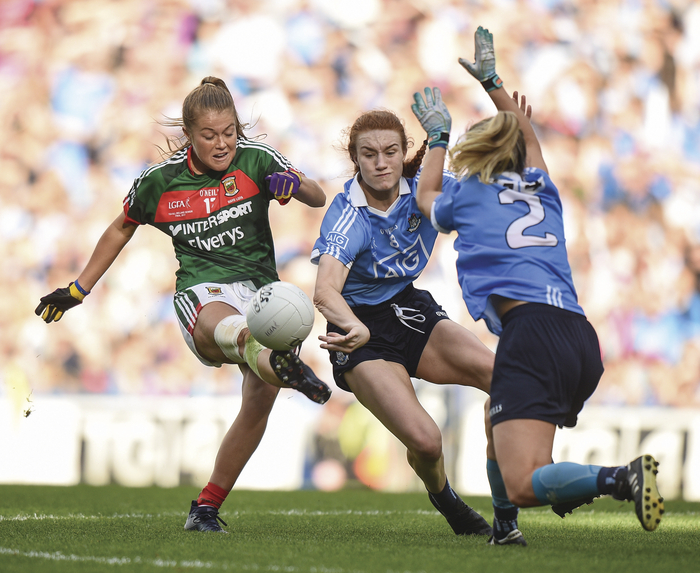 Shooting for glory: Sarah Rowe has her effort blocked down by Dublin's Lauren Magee and Martha Byrne.

By the time they got back up to the full compliment there was still only three in it, with Staunton and Aherne exchanging points from frees, but Dublin did miss a few goal chances in those minutes with Noelle Healy and Lauren Magee missing the target (Magee’s miss was brought back for the free Aherne scored after advantage had been played ).

The game was coming to the boil, with the teams going point for point over the middle third of the half - but you always felt that Mayo were going to need to get a goal to really give themselves the chance they needed in this. However the Dublin defence was in a mean mood and never really looked like letting Mayo in for one.

Once McCaffery rattled the net for her sides second goal, it was always going to be a serious task for Mayo to haul in the Dubs’ lead, they gave it their all, but left themselves open at the back and Dublin were able to finish off the game in style with two well taken goals. The effort that Mayo had put in when they were down to 13 players - saw them just run out of gas a little bit down the home stretch, but they didn’t throw in the towel and kept plugging away. 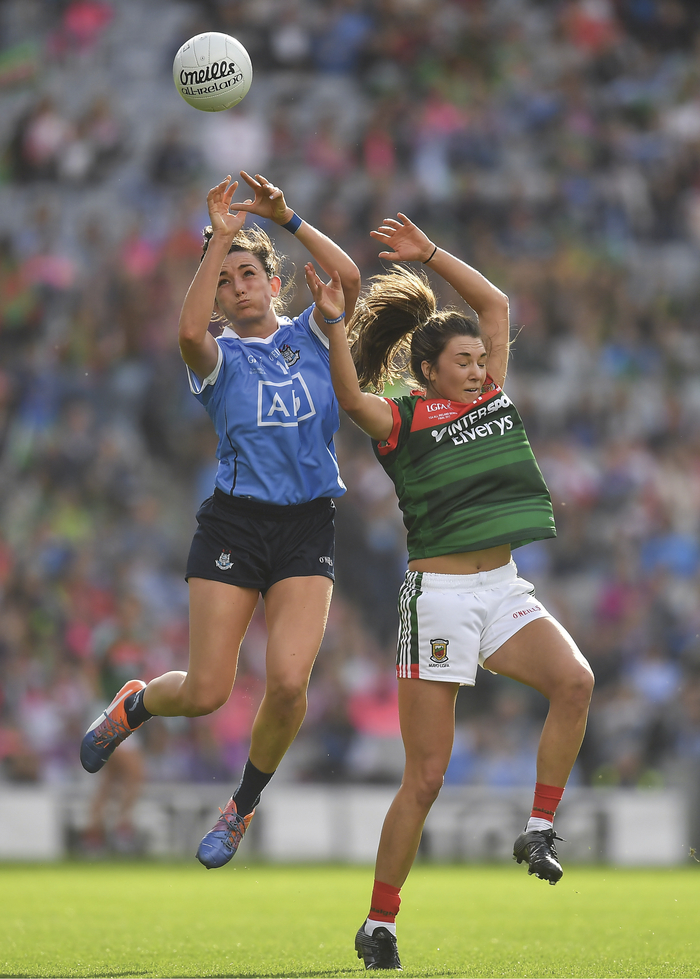 Up in the air: Niamh Kelly contests for the ball with Niam McEvoy. Photo: Sportsfile

It’s been a good year for Mayo, coming back from a hammering against Galway in the Connacht final - to seeing off Kildare then Ulster champions Donegal and the defending All Ireland champions Cork on the way to the final. It’ll hurt for a while, but they will come back again and come back stronger than before.