Sometimes it’s not about being the better team, it’s about finding ways to win games when you are probably second best on the day. Dublin were able to do that, they were able to get themselves over the line right at the end when it mattered most and they claimed their third All Ireland title in a row.

Mayo left no stone unturned in their efforts on Sunday, sometimes the breaks go for you, sometimes they don’t. Cillian O’Connor’s effort from a free tight to the Hogan Stand into the Hill on 70 minutes looked like it was going to creep over and give Mayo the lead down the home straight, but it came back off the post and was cleared to safety - those are the fine margins that games of this magnitude are decided on. Six minutes later Dean Rock slotted over his free and Mayo weren’t able to get possession of the ball back from the restart and Dublin played keep ball to see the game out.

The game started with a stinging Dublin blow, Con O’Callaghan cut inside Colm Boyle and the rest of the Mayo defence to burry the ball past David Clarke inside the opening three minutes. It wasn’t a sign of things to come though as Mayo stuck to their game plan and went about shutting down the Dublin attack and play their own game.

Andy Moran hit Mayo’s first point of the game with a sweet finish six minutes in and a mintue later Donal Vaughan split the posts with a well taken finish. Kevin McLoughlin levelled the contest up on 13 minutes and Lee Keegan had a chance to push Mayo in front right after but his effort dropped short of the bar. Dublin edged back in front inside the next minute with Eoghan O’Gara’s effort given the nod by Hawk Eye. Mayo missed their next two attempts on goal with Paddy Durcan and Moran pulling efforts wide of the target. Cillian O’Connor with his second of the day after a one-two with Andy Moran from a quick free and Moran tagged on another to edge Mayo 0-5 to 1-1 clear with 19 minutes gone.

Rock pulled Dublin level from a placed ball on 21 minutes and Moran pushed Mayo back in front shortly after that and Jason Doherty put Mayo two clear not long after the restart from Moran’s score. Dublin weren’t wilting though under the Mayo presssure, with John Small and Rock scoring points in quick succession to leave it level once more, with nine to go to the break. 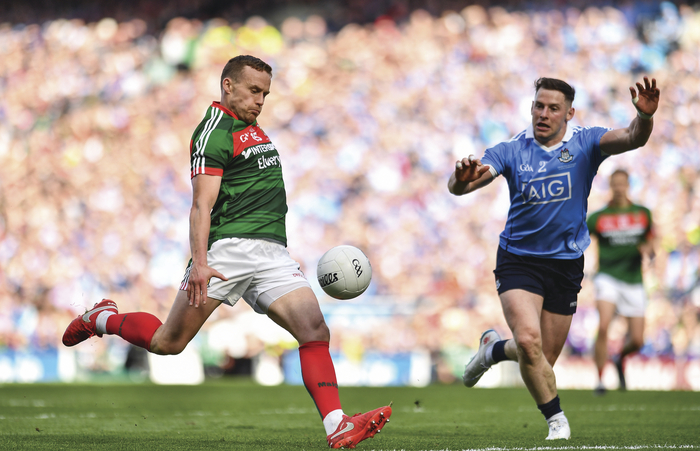 Eye on the ball: Andy Moran slots over a point for Mayo. Photo: Sportsfile

Doherty landed his second point of the fay after some good work by Moran and Kevin McLoughlin to send Mayo one clear, but Mayo will rue two misses from Cillian O’Connor one from a free and another effort from play that went high in the air, but was short on range. Colm Boyle did fire over a fine score two minutes into injury time to nudge Mayo further in front but a soft free awarded to Dublin right at the end of the half allowed Rock to leave his side just one behind at the break on a score of 0-9 to 1-5.

Dublin changed things up at the break with both Diarmuid Connolly and Kevin McManamon entering the fray during the recess. Paul Mannion levelled the game up within 30 seconds after Dublin won the restart and the ball was worked to the Kilacud Crokes man, who slotted it over on the run. O’Connor clipped over a free two minutes later to edge Mayo back in front again as the game started to come to the boil and no quarter was going to be given by either side.

Rock broke inside Chris Barrett to tap over a leveller and then McManamon edged Dublin in front for the first time since the quarter-of-an-hour mark. Seven minutes into the second half Mayo got in for their first sight of goal when Jason Doherty was put clean through, he hit it hard and on target but Stephen Cluxton saved it well, Doherty collected the rebound and was fouled allowing O’Connor to tap over the resulting free to tie it all up at 0-11 to 1-8.

Paul Mannion charged down the heart of the Mayo defence and put Dublin one clear again before Brian Fenton and James McCarthy tagged on a point each with Cillian O’Connor pointing a free. In the middle of that scoring burst, both sides were reduced to 14 with Donal Vaughan getting a straight red for Mayo and John Small his second yellow in a tussle that saw Vaughan clatter into Small after the a free had been given against the Ballymun Kickhams man, it was needless by the Ballinrobe man. 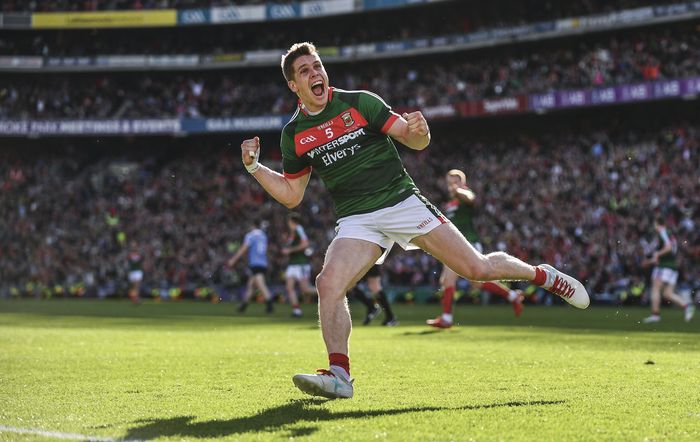 The goal that you always felt Mayo needed if they were going to win this game came 17 minutes from time when Lee Keegan drove the ball past Cluxton after some good build up play by Aidan O’Shea and Cillian O’Connor. The Westport man’s strike put Mayo into a 1-12 to 1-11 lead and got the Mayo faithful believing.

Diarmuid Connolly kicked a great point to tie it up shortly after as the game moved toward the winning period. Kevin McLoughlin and Rock swapped points, then Mayo hit two in a row inside two minutes with Cillian O’Connor landing both one from a free and the other from play. But Dublin showed why they were going for three-in-a-row with Mannion and McCarthy kicking points to level it up and then Rock edged Dublin in front again four minutes from time. Mayo came straight back at them and Cillian O’Connor pulled Mayo level with a fine score.

It was edge of the seat stuff, O’Connor’s effort from a free came back of the post and both sides won and lost possession over the next five minutes, when the cruelest of misfortunes befell Chris Barrett who had a brilliant game when he was adjudged to have fouled Connolly 40 meters out. Rock held his nerve and sent it over the bar - Mayo had time, but they got their restart wrong and Dublin were able to play down the last few seconds despite the frantic efforts of Mayo to win back the ball. It was cruel, heart-breaking and everything in between - but once again Mayo came up short once more, but once more Mayo will come back. They know no other way.