Hurling is a game of inches, an inch this way and that way can decide the outcome of a game, be it from a shot for a score or a ball that slips just past a hand and there was just a matter of a few inches between Mayo and Kildare on the scoreboard and the field in this Christy Ring Cup first round clash.

When Sean Regan pulled on the sliothar and drove it towards the target four minutes before half-time, Mayo were in the middle of a purple patch and eating into Kildare’s lead. Regan’s effort looked to have bent in just enough to have gone between the posts, but despite the protests from the Mayo bench the umpire waved it wide and we’re a long way from Hawkeye in the first round of the Christy Ring Cup at the tail end of April. It might not have seemed so at that stage, but had that effort been given as a point, Mayo might not be facing into the losers round next weekend looking to keep their interest in the competition extend beyond the first weekend of May.

There was just one point between the sides on the scoreboard at the end of this game, and Mayo did have chances to level it up, they can’t say that they didn’t - but they weren’t able to take them. With 15 minutes to go, they trailed by 0-15 to 0-9 and were playing with just 14 men after David Kenny was shown a straight red card for an off the ball clash nine minutes after the turn around. But then something clicked in Mayo and they found their way, after looking for long stages like a side short on ideas and their constant fouling allowing David Reidy to drive the ball over the bar from a variety of distance and angles, the Kildare number 11 would finish up with 13 points to his name all of them from placed balls during the game. 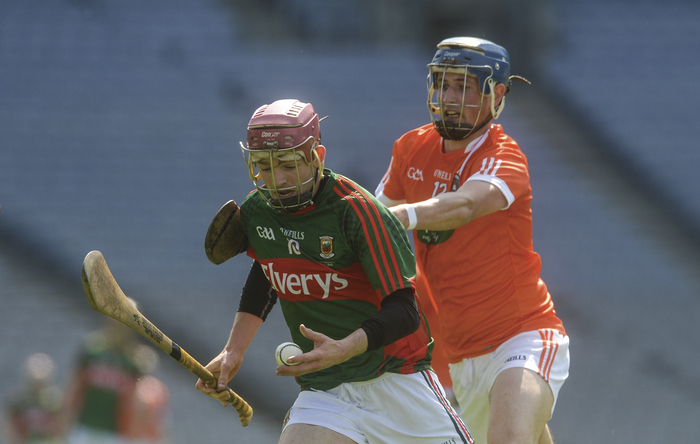 With 56 minutes gone, Joseph McManus drove over a hard won point to bring the gap back to five points, Corey Scahill who had a busy afternoon got his only score of the day a minute later, right from the puck out Sean Regan struck one over to close the gap back to three points and five minutes later Keith Higgins pointed his eighth of the day to leave just two between the sides and Kildare were rattled.

But they edged three in front again thanks to an excellent pointed sideline from Jack Sheridan, however Mayo smelt blood and went for it. Higgins swiftly responded with another free and then put just one between the sides with a great score on the run as the game edged into five minutes of injury time.

Mayo’s discipline let them down again when they needed it to be held most and Reidy slotted over his sides 17th and final point from a free to leave the score at 0-17 to 0-15 a minute into injury time. Mayo didn’t go for goals and instead opted to try and reel in their visitors lead through scoring points, Joe McManus cut the gap back to just one with a brilliant effort under pressure in the 37th minute of the half, he went for the leveller not long after, but his effort tailed just wide of the near post. But Mayo did have one last chance when Higgins shaped up to hit a free from just beyond his own 65 meter line, he had the distance, but the ball just tailed wide of the target. There was still time for the ball to be pucked out and Mayo won it back, but were unable to create the scoring chance they needed and Mayo’s day got even worse after the final whistle when Kieran McDermott was shown a straight red card by referee Johnny Murphy.

The first half was a bitty affair and at half time Kildare went in leading 0-10 to 0-6 with Reidy scoring eight of the leaders points, Mayo also relied on Keith Higgins’ free taking to keep them in the game with the Ballyhaunis man hitting four points and Joseph McManus and Diarmuid McLoughlin landing one each from play for JP Coen’s team. nMayo did also have two good goal chances with Regan’s goal bound effort blocked by a Kildare defender and McManus’ close range bat down just going wide of the target.