It’s unlikely that you’ll ever see this combination of Mayo players ever line out together again for a competitive fixture, but it gave a number of players a taste of what it’s like in the big leagues they’ll not forget and some others who have serious designs on being around there for a long time plenty to work on.

The result of this game was never of real importance to the future of Mayo football, but it was being back on the back pages for footballing reasons solely is something that most would welcome. The over 2,500 who paid in to MacHale Park certainly got their monies worth on the scoreboard with 40 scores being hit over the seventy minutes, not bad return on the excitement stakes, and Mayo even had the chance to pinch the win at the death when James Durcan got in for a half chance of a goal only to see it saved well by Tadgh O’Malley in the NUIG goal.

In total ten players made debut for Mayo in the starting 15, with Rory Byrne, Niall McManamon, Ray O’Malley, Donie Newcombe, Brian McDermott, Michael Plunkett, Fionn McDonagh, Cian Costello, Fergal Boland and Liam Irwin all making their first senior bow for Mayo, while Brian Reape who had seen game time for Mayo from the bench before making his first start for the county. The number of debutants only went up in the second half with all six subs who came on making their bows for the county.

On the field, a lot of eyes were on Castlebar Mitchels main man Neil Douglas who has lit up the last few senior club championships for this clubside. The Castlebar man finished with 1-3, but left a few more scores behind him in and up and down day, but there is more than enough reasons he’s given in the club championship over the last few years to say he should be given plenty more game time to find his groove.

The Mayo full forward line of Douglas, Liam Irwin and Brian Reape is an exciting one on paper, with both Irwin and Reape hitting three points each leaving that attacking line with 1-9 for their efforts for the day.

But it was another Mayo attacker who took the biggest plaudits of the day, with Mayo Gaels man Adam Gallagher finishing the day with nine points, four of them coming from play. The sides went in locked level at half time on a score of 2-7 to 0-13, with Neil Douglas and Danny Kirby finding the net for Mayo. Their two goals came in a six minute period in the final ten minutes of the half with Douglas hitting the net from the penalty spot. NUIG weren’t afraid to take on shots from long range with Michal Daly, Enda Tierney and Damien Comer all kicking big points from out the park. 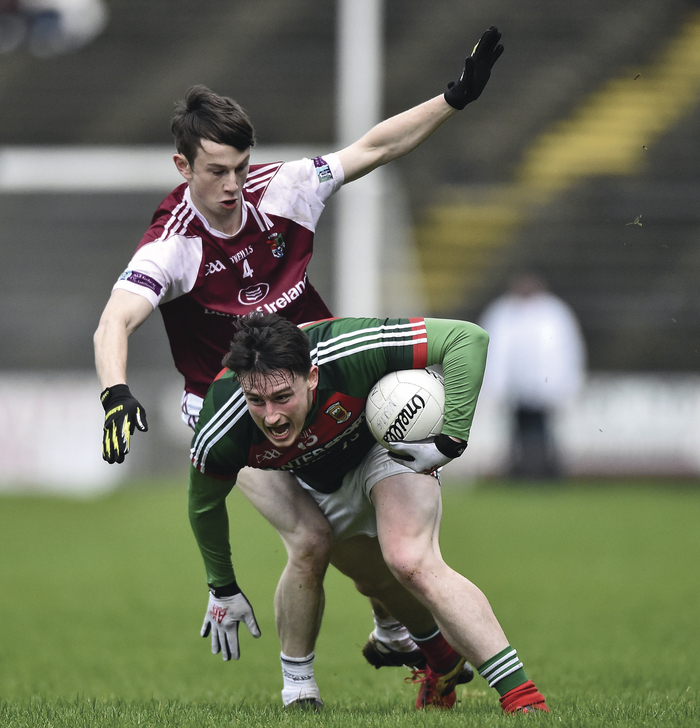 The second half saw the students who push themselves into a six point lead midway through with Damien Comer’s goal a vital score in the contest and Mayo reduced to 14 men when Ray O’Malley was shown a second yellow card 48 minutes in. Mayo did close the gap back down the home straight with Shane Nally who was the captain for the day hitting two peaches of scores from long range and Fionan McDonagh kicking another within minutes of his introduction. Douglas’ final point in injury time from a free cut the gap back to just two, but it was the fair result at the end of the day with the students holding on for the win.