They didn’t quite hit the net as many times as they did against Knockmore in the semi-final two years ago, but Ballintubber laid down a serious marker of intent in MacHale Park on Sunday afternoon, hammering Garrymore by 6-14 to 1-8 to set up a mouthwatering semi-final showdown against Castlebar Mitchels next weekend.

The defending county and Connacht champions had booked their place in the last four earlier in the day with a hard fought 3-13 to 1-13 win over a stubborn Ballaghederren side and the two teams who have won five of the last six Moclair Cups will square off of a place against either Breaffy or Knockmore in the final next weekend.

Ballintubber hit three goals in each half of their game, with Michael Plunkett netting just two minutes in to get the first score of the day. Ballintubber tagged on five more points inside the next 11 minutes with Cillian O’Connor kicking three and Bryan Walsh and Damien McGing also getting in on the action. Garrymore managed to raise the white flag twice themselves in that period with Jimmy Killeen and Kieran Cunningham scoring for the south Mayo side.

But even at that early stage it looked like there was only ever going to be one winner and 15 minutes in Cillian O’Connor kicked the first of four goals he would score inside 25 minutes. That was followed by a point for Michael Plunkett before Alan Plunkett scored his sides seventh point. Just before the break, O’Connor was on hand to finish off a brilliant move that was started by Michael Plunkett and involved Gary Loftus, Alan Plunkett and Cathal Hallinan who drove it past Brian Lynskey in the Garrymore goal for his sides third. That score sent Ballitubber in leading by 3-7 to 0-2 at the break.

It was a case of more of the same in the second half, with Bryan Walsh pointing inside three minutes and O’Connor landing a free before Jason Gibbons was played in with oceans of space in front of him to hammer home Ballintubber’s third goal on 35 minutes. Two minutes later O’Connor had his hat-trick and less than 60 seconds later he had a fourth after Conor Finnerty played him through.

What could go wrong had gone wrong for Garrymore in this game, but they kept plugging away with Micheál Connolly rattling the back of Frank Walsh’s net for a consolation goal, but it wasn’t even really that as Ballintubber wound the clock down to run out 21 point winners on a final score of 6-14 to 1-8

Mitchels made to work by stubborn Ballaghaderreen 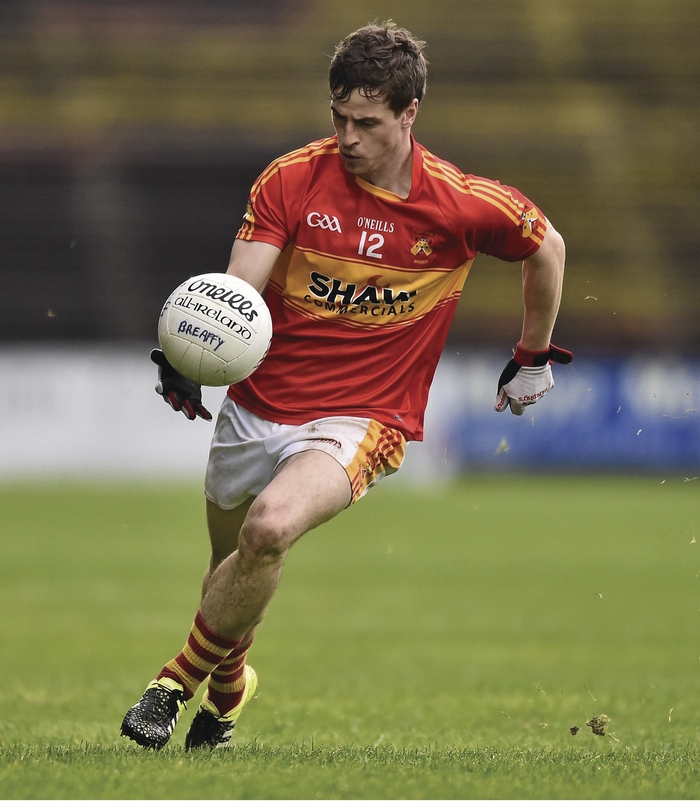 Neil Douglas was in great for for Castlebar Mitchels today. Photo: Sportsfile

In the days opening game champions Castlebar Mitchels were given a stern examination for a long time by Ballaghaderreen. The east Mayo men are the last side outside of Ballintubber and Castlebar to claim a Mayo senior title back in 2012 and despite being underdogs they weren’t going to let Castlebar get anything easy in this game.

Barry Regan returned to the Ballagh’ starting 15 after missing last weekends final group game loss to Knockmore and the veteran kicked eight of his sides 13 points, six of them coming in the first half. Castlebar welcomed back to the fold, Paddy Durcan, Barry Moran and Ger McDonagh after their involvement with the Mayo seniors over the summer and all were to play key parts in Declan O’Reilly’s sides win in MacHale Park.

Ballaghderrenn hit the ground running and after nine minutes were 0-6 to 0-2 up with Regan hitting three points and Andy Moran, Shairoze Akram and Gavin Conway adding the others. The Mitchels scores came from points from James Durcan and Neil Douglas who put in another great performance for his side kicking six points following on from the ten he scored last weekend against Ballina. Points from Douglas, James Durcan and Cian Costello who was the man of the match for his side, with a brilliant display of incisive running and hard work all throughout the game, had the gap back to just a single point after 18 minutes. Regan and Thomas Camody added on points for Ballagh, with Douglas kicking another for his side before the first goal of the day came. That vital goal went to Castlebar, with Eoghan Reilly clawing it to the net after a great break involving Shane Irwin and James Durkan in the build up. That score put Castlebar back in front, but two more points from Regan ensured that Ballaghaderreen would go in leading by 0-10 to 1-6 at the break.

The second half saw Castlebar really up the gears and show their championship credentials. Douglas and Regan traded scores early on, before Costello slammed home a brilliant goal from a tight angle after Douglas found him in space behind the cover with an inch perfect ball. That put Mitchels three to the good and they were ready to put the foot down. The added on a few more scores with Ballagh’ struggling to keep up the pace and power they’d shown in the first half and when Barry Moan added his sides third goal 47 minutes in the game was put to bed as contest.

Ballagh' did keep going, with Akram managing to raise the green flag for his side in the dying seconds, but it was too little to late as Castlebar marched on to book their place in the semi-finals next weekend.