When Mayo needed a man to show the leadership in a clutch situation, their star man came good right at the death. Cillian O’Connor showed why he was picked by Stephen Rochford as his captain, when he created the space he needed to shimmy inside and drill the ball through the drizzle over the bar and electrify the Mayo faithful in Croke Park to haul his side level at the death.

When a team comes from five points down at the break, having everything that could have gone against them fallen on the wrong side of the line, take it on the chin and come back fighting and looking for more to earn another shot, normally you’d expect the camp to be bullish and full joy from their efforts. 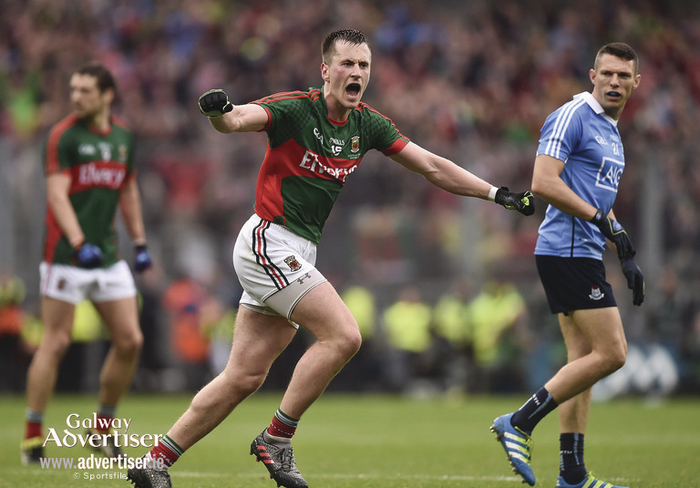 But Stephen Rochford is a pragmatist and he was disappointed with how things went and he wasn’t afraid to say so after the game saying, “look we’ll be very disappointed with a number of aspects of the game. I felt we contributed enough to the concession of the two goals, even if some people feel they were unlucky but you make you’re own luck. We know there’s still serious scope for us to improve on and we’ll look forward to being back her in 13 days”

The two goals that Mayo conceded in the first half were unlucky but also avoidable, Mayo coughed up possession from a good position, something that happened far to regularly and Brian Fenton got in to have a shot that was well saved by David Clarke, the ball bounced loose to Bernard Brogan who pulled on it on the deck, but Brendan Harrision got his foot in to block, but the ball squirted across the face of the goal where Kevin McLoughlin was rushing back and put it through his own net. That happened nine minutes in, when Mayo were leading by 0-2 to 0-0 thanks to a fine Tom Parsons score and O’Connor free.

Fenton got in again not long after and David Clarke saved brilliantly to deny him, in between Dean Rock whose radar was off all day struck two frees wide of the post. With 21 minutes gone the ball was the back of the Mayo net again, this time Colm Boyle was the unlucky man, Diarmuid Connolly drove in a great ball to Rock, who’d got in behind Boyle, the ball bounced loose and up and it flew into the net off the thigh of the Davitts man. 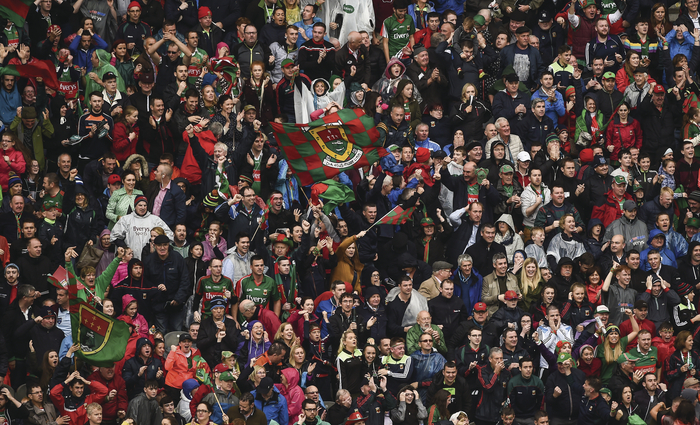 At that stage Mayo fans feared the worst, but they were playing well and keeping Dublin at bay only for the two outrageous own goals they conceeded. O’Connor had fired over free to tie it up after the first goal and Donal Vaughan after some good link up play cut the gap back to two with 12 minutes left in the half. Dublin’s James McCarthy was sent to the line after he was given a black card for an off the ball coming together with Cillian O’Connor, but his replacement was about to become a big thorn in Mayo’s side. Rock finally found his range from a free and Paddy Andrews kicked two fine scores to have the Hill in full voice, Jason Doherty hit back with a splendid point two mintues from the break in between Andrews scores, with Rock adding another free right at the end of the half to send Dublin in leading 2-4 to 0-5 at the short whistle.

Despite Dublin only registering ‘their’ first score 30 minutes in they somehow went in leading by five a that the break. Mayo raced into it right from the off in the second half and Andy Moran slotted one over from his favoured position out on the right close in. Patrick Durcan slalomed his way through the Dublin defence to nail one three minutes later and the gap was back to three as the Mayo supporters once more found their voice in the Cathedral of Gaelic Games. O’Connor nailed another from play, then one from a free and there was just one in it. By the tenth minute of the second half Mayo were level when the Ballintubber man slipped another between the posts.

The Dubs weren’t for bending though and Brian Fenton edged them back in front once more on the 50 minute mark, Rock landed another after Mayo turned over the ball once again. With 17 minutes left the goal chance that Mayo craved arrived when Andy Moran found a chink of light in behind the cover but he shot over the bar from a tight angle, but Mayo needed the score and that’s what he got. Alan Dillon was introduced from the bench for Mayo and he landed a great score to level it under pressure on the Hogan Stand side of the field following some great work by Diarmuid O’Connor and Andy Moran. The Ballintubber man picked up an injury not long after and had to be replaced by Barry Moran 11 minutes after coming on. Mayo couldn’t push on and the blue wave came back at them once more. John Small who terrorised Mayo down the left flank all day edged them back in front, Rock scored another free and from the resulting kick-out, the ball hit Diarmuid Connolly on the back and he was able to turn around and swing it left footed over the bar and Dublin were three clear again with normal time almost up. 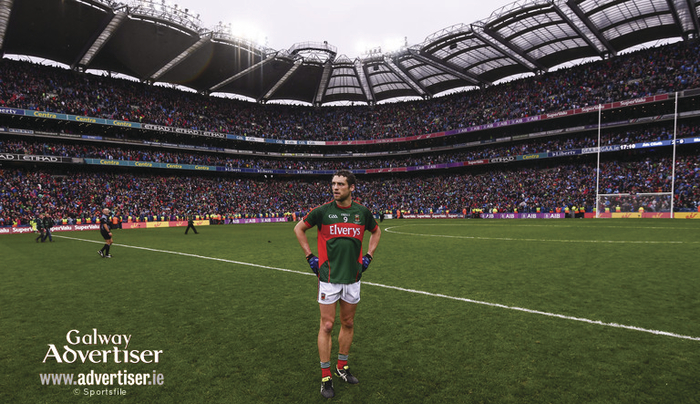 But there were seven minutes additional time and Mayo still had the hope and desire in their hearts and the willingness to leave it all on the line to go again. O’Connor pointed a free from close range, Donal Vaughan got in on the end of a move where Mayo took their time to create the space for the man in the best position and it was down to just one. Dublin had a chance to run it down late, late on by Connolly opted to go for a score from a sideline ball that drifted wide. Mayo worked it back up the field and the man you would have wanted to have the ball at the crunch time and he nailed it, showing the composure and leadership you want in pressure situations and Mayo lived to fight and another day.