At the end of the day, the result is all that matters. It wasn’t the prettiest of games in Croke Park, but it was intense, intriguing and full of industry and some moments of pure inspiration. Mayo are in the All Ireland semi-final in two weeks time and that’s exactly where they want to be. They dug in and put in the hard yards on the field in Croke Park and thanks to Lee Keegan’s point five minutes from the end, that seemed to take at least five minutes before it dropped over Niall Morgan’s bar they won the day and moved step closer to their ultimate goal.

Stephen Rochford showed he wasn’t afraid to tear up the script either, with both Alan Dillon and Jason Doherty coming into the team before throw in with Kevin Keane and Evan Regan dropping out. Falling back from the attacking roll that he had played all season went Keith Higgins to add some experience and pace to the backline.

Both sides started the game nervously as they tried to feel each other out in the opening few minutes and neither side was able to register a score with their first opportunities dropping them short into the keepers arms. Mayo were first to raise the white flag when Aidan O’Shea thumped one over from well out the park six minutes in, the big Breaffy man soon moved into the full forward line after that for a few minutes as he mixed up his station on the field throughout the contest Niall Sludden slammed one over the bar for Tyrone nine minutes in to tie things up. 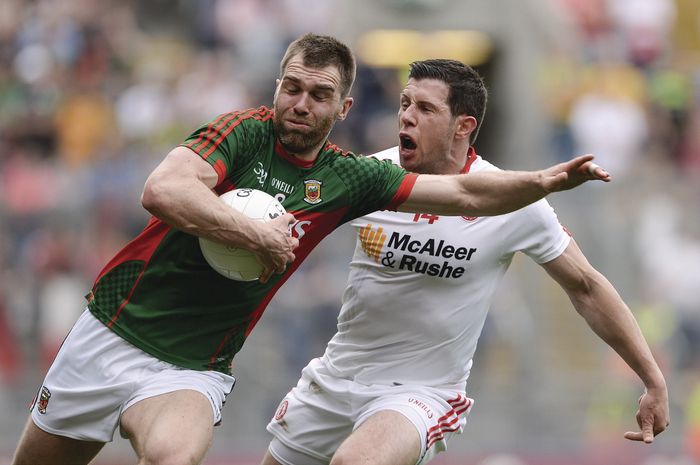 Mayo went back into the lead thanks to a fine Andy Moran score. The Ballaghaderreen man put in another tireless shift, looking to provide and outlet for his teammates at every opportunity. The score came after a long ball in from Alan Dillon was broken down by O’Shea who had three men for company in the air. Cillian O’Connor stretched Mayo’s lead out to two points with a well taken free just after the quarter of the hour mark, but you could sense this was never going to be a game where a big gap was going to open up, it was going to be all about the inches.

Mattie Donnelly who had a fantastic game for the beaten Ulster champions rattled off two points in the space of a minute to level it up at 0-3 to 0-3 with 18 minutes gone on the clock, but O’Connor struck his first from play straight after, he was played in by Aidan O’Shea who showed some quick footwork to create the space for his captain.

Ronan O’Neill hit back for Tyrone from a free not long after and with eight minutes to go in the half, O’Connor struck again this time after Andy Moran had worked out a quick one-two with him from a quick free. Tyrone weren’t going to let Mayo drive on and a Peter Harte free had the teams all square on the scoreboard on 25 minutes. Six minutes later the Ulster men pushed into the lead for the first time through another free from the Errigal man and a Mattie Donnelly point put them into a 0-7 to 0-5 lead. Mayo dug in and O’Connor converted a free and Colm Boyle hit an inspirational score just before the short whistle to leave the sides level at the break and all to play for.

Mayo introduced Tom Parsons from the bench for the second half replacing Dillon who had put in a serious shift in the first 35 minutes, especially in the opening 20 minute period. Before the ball was even thrown in David Gough handed out two yellow cards for an incident in front of the Davin end of the ground, which would have a major baring on the outcome of the game later on. 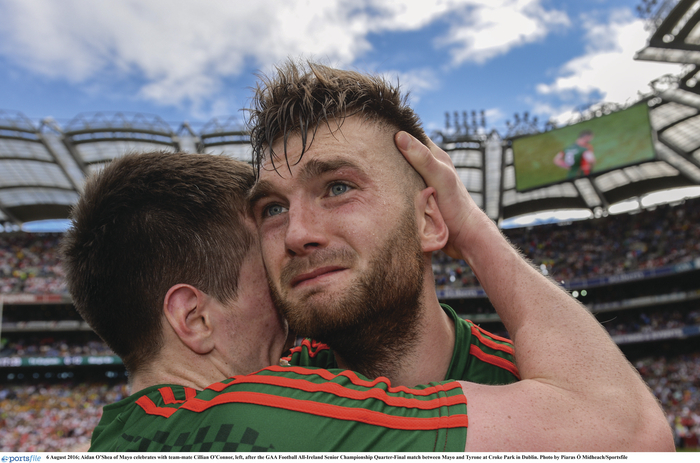 From the throw in, Aidan O’Shea won the ball and charged right down the heart of the Tyrone defence before he slipped it to O’Connor coming around from the back and the Ballintubber man made no mistake putting Mayo back into the lead. Harte levelled it up three minutes later before scores from O’Connor and Parsons edged Mayo back into a two point lead with almost half an hour to go. Tyrone weren’t going away though and two McAliskey points had them level once more with 20 minutes to go. Keegan and Harte swapped points, before Sean Cavanagh was blown up for fouling Aidan O’Shea and picked up his second yellow card of the game and Tyrone were down to 14 men for the final 12 minutes.

O’Connor converted the free to edge Mayo into and 0-12 to 0-11 lead, but three minutes later the game was level once more and the nervous energy in the stadium was building to a breaking point. With just over 64 minutes gone, Keegan swept the ball high into the air from out on the Cusack Stand side of the field and his effort had just enough in it to scrape over the bar and push Mayo back in front. As the clock ticked down Mayo tried to play keep ball and see the game out, but they managed to cough up two scoring chances that Tyrone failed to take and Mayo held on to make their way into the last four.