Mayo are back within one game of the All Ireland quarter-final after a comprehensive win over Kildare in Elverys MacHale Park on Saturday night. Stephen Rochford’s men ran out nine point winners of the Lillywhites thanks in the most part to a late first half burst which saw them kick 2-2 in the closing seven minutes of the half.

Mayo started with the same 15 named on Friday night and hit the ground running reeling going into a 0-5 to 0-1 lead after just 11 minutes, with Diarmuid O’Connor putting in a staring role in the early exchanges, a performance he would keep up right until he was withdrawn from the action with a few minutes left to go.

O’Connor slung the ball over the bar from the right flank with the outside of his boot less than a minute in a trick he would repeat twice more in the next ten minutes as Mayo threatened to steam roll Kildare early on. Diarmuid’s points were joined by two points from placed balls by his big brother Cillian, with Cathal McNally responding for Cian O’Neill’s outfit. 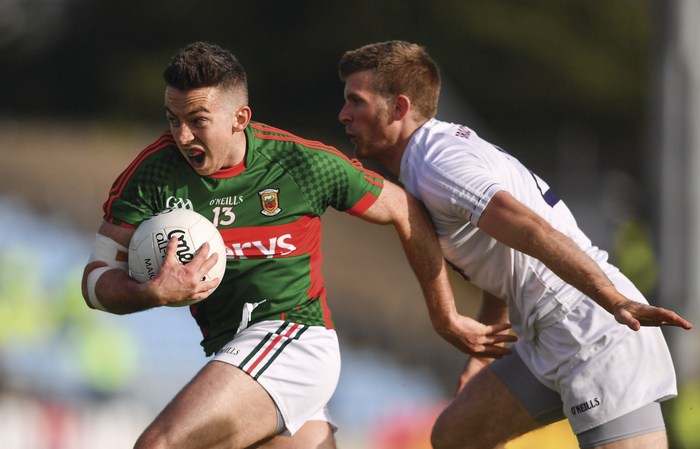 Kildare did show heart and grit over the next 15 minutes of the game and had it back to a two point game on a score of 0-7 to 0-5 thanks to a brace of points from both Morgan O’Flaherrty and Neill Finn. In between that volly of points for the visitors, the Mayo faithful felt they could have had two penalties after both Eevan Regan and Diarmuid O’Connor looked like they could have been fouled as they tried to go for goal.

The disappointment of not getting those calls was soon forgotten when Mayo hit the back of the net through Evan Regan on the 28th minute. Andy Moran shimmied and shuffled his way into a goal scoring position, but his effort was blocked by Kildare goalkeeper Mark Donnellan, Moran had the wherewithal to react quickest and toe poke the bouncing ball on again and Regan was on hand to tap it home from close range.

The Ballina man slipped over one between the posts straight after that score after Kevin McLoughlin had won the break from the kick-out after the goal to set him up. With two minutes to go before the break the stand out moment of brilliance in the game arrived. Cillian O’Connor was fed the ball by Colm Boyle, Diarmuid was breaking off Cillian’s shoulder and picked the ball up just outside the 45m line. The Ballitubber man cut loose and glided past three challenges, before slipping the ball low to the net and setting Mayo on the road to victory before the half time whistle had been sounded. Regan could have got in for another goal right after that score but his effort was tipped over the bar by Donnellan and Mayo had to settle for a 2-9 to 0-5 lead at the break. 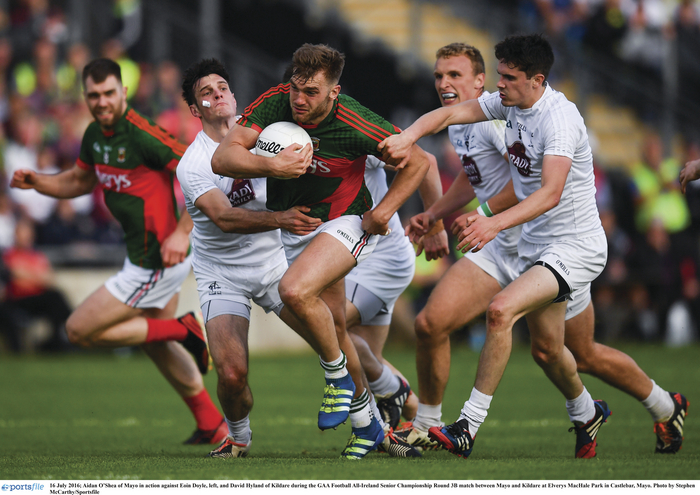 Ploughing through: Aidan O'Shea saw action in the full back line in the second half. Photo: Sportsfile

The game as done as a contest and the second half was played out in challenge game style, with Kildare edging the final 35 minutes 0-9 to 0-8 on the scoreboard but there was no real time they ever came close to putting Mayo under any real pressure down the stretch.

Kevin Keane picked up a shoulder injury that forced him from the action about ten minutes into the second half and with Mayo already down a full back with Ger Caffereky out for the season, Aidan O’Shea played out the rest of the game in front of his own goal for the most part. While there are a lot of people who want to see Aidan perched on the edge of the square, that is not what they’ve been calling for. If Mayo lose any more players defensively with Chris Barrett also out of commission, the Mayo faithful will be hoping that this is a sight they don’t have to see again too soon.

Colm Boyle showed some cuteness and guile, by taking one for the team, hauling down Fegal Conway 50 minutes into the match when he was breaking for goal and taking the black card, rather than let the Kildare centre half forward in for a shot at goal.

All roads now leads to the last 12 and a meeting with one of the provincial finalists and place in the last eight up for grabs. For now as last week it’s a case of job done and onto the next one