They packed the ground from early in the day and there was a carnival atmosphere around Ruislip well before throw in. While the the football on display wasn't of the highest quality getting out of London without any slip ups was the main priority for Mayo and that's exactly what they did.

There was one change to the Mayo side from the one that was named earlier in the week with u21 captain Stephen Coen coming in for Tom Parsons in the middle of the park and the Hollymount-Carramore man put in a good shift partnering Jason Gibbons in a new look Mayo midfield.

Mayo looked to have opened the scoring four minutes in when Evan Regan clipped the ball over the bar, but the ball was adjudged to have gone over the end line while Regan cut a shape to take on the shot.

It was the hosts who raised the first white flag of the day when Scott Conroy put over a free from close range. Before Mayo could respond on the scoreboard, they were forced to make a change when Cillian O'Connor was shown a black card for what appeared to be a trip. He was replaced by Conor Loftus and the Crossmolina man made a big impact in the game.

Robbie Hennelly kicked a 45 to get Mayo motoring but they were being wasteful with other chances and kicked a number of wides. The one advantage to these misses was that they got the London kick-out strategy well mastered in a short time. London wanted to kick the ball short every time and Mayo pushed up on them and forced plenty of errors. 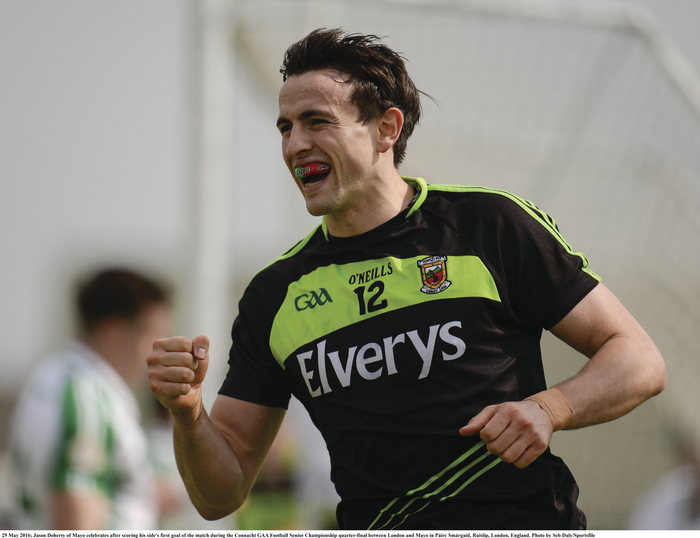 Doc Goal: Jason Doherty hit the back of the net. Photo: Sportsfile

By the 17 minute mark Mayo were four to the good thanks to there points from Regan who had taken over the free taking duties from close range. Just before 20 minutes, Mayo's work on the London kick out paid rich dividends when Kevin McLoughlin picked one of Gavin McEvoy's kicks from the air on the right win and and the ball was fed into Loftus who finished to the net with ease.

Loftus followed that up with a neat score from play and the game was moving towards it's inevitable conclusion at this early stage. Just around the 25 minute mark Mayo got their second goal through Jason Doherty after Aidan O'Shea had eaten up the ground with a powerful run and shaken off a few tackles. That score put Mayo into a 2-7 to 0-2 lead and the crowd could get back to enjoying the party atmosphere in the ground.

London did hit a flurry of three points on the bounce before the break with Adrian Moyles chipping in with two of them and Liam Gavaghan also raisin the white flag. The last score of the half came from another Regan free and Mayo went in nine points to he good at the break. 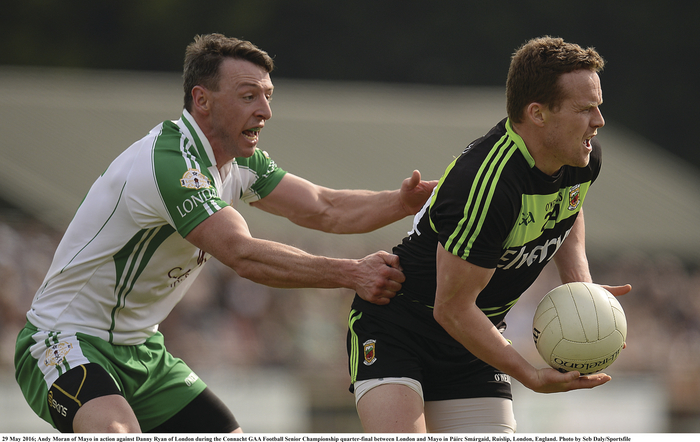 Big splash: Andy Moran made a big impression off the bench. Photo: Sportsfile

The second half was just a matter of seeing out the game for Mayo and they did it in comfort, though they will be disappointed that they didn't convert all their possession into more scores. Rochford gave game time to the full complement of subs before the end, with Andy Moran coming on and kicking two points with in a couple of minutes of his introduction.

It was a case of job done, but Mayo will face much bigger challenges in the weeks ahead starting when Galway come to Castlebar on June 18.