Michael Plunkett wasn’t the man that you would have expected to pop up and score the winner in this epic encounter in Sligo, but the Ballintubber man showed nerves of steal to edge Mayo ahead in injury time of a dramatic encounter.

Mayo’s greater will at the end was the reason that they claimed the counties 24th title at this grade and their first in seven years, but they also got a nice chunk of luck along the way. Had Henry Walsh not bounced the ball on the slippery surface as he rounded Matthew Flanagan 23 minutes when his side were leading by 1-4 to 0-1 and ended up putting the ball wide of the target as he fell to the ground, or had Sean Mullolly not been shown what looked to be a harsh black card just before the turn around or had Flanagan not pulled off a great save from Diarmuid Murtagh a minute into the second half or finally had Roscommon not lost midfielder Cathal Compton to injury at a vital stage the outcome could have been much different.

But that’s enough of the ifs, buts or maybes, because Mayo won this game due to a lot of heart, a willingness not to throw in the towel when it looked like it was going against them and some outstanding performances by some key players when they needed it. Diarmuid O’Connor, Matthew Ruane and Stephen Coen got through an enormous power of work all day long and that triangle drove Mayo on to glory. Up front Liam Irwin shook off two missed frees early in the game to finish up with 1-3 over the hour and show the ultimate poachers instinct to get Mayo’s vital goal with less than five minutes on the clock.

It all looked like it would be much, much different early in this game as Roscommon raced into a quick fire 1-3 to 0-0 lead. It took three minutes for the first score to come and it was some first score. If Mayo hadn’t been warned about the danger that Diarmuid Murtagh posed before the game he reminded them when he collected a ball from Cathal Compton and burnt David Kenny before firing the ball low past Flanagan to raise the green flag in some style. 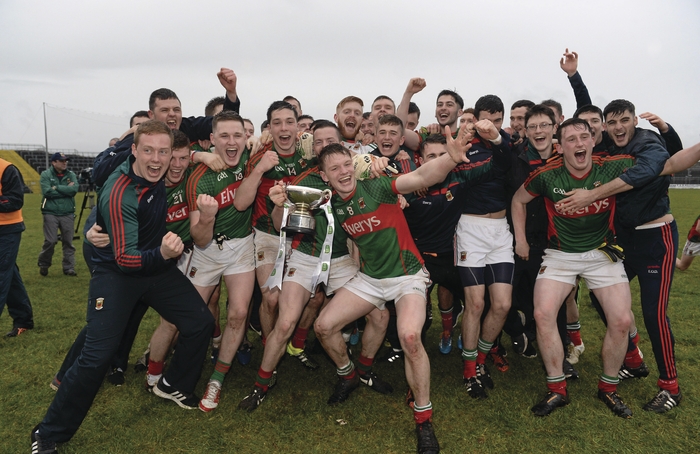 The same man kicked his sides first point a minute later when he took command of some lateral play by his teammates and drove the ball over the bar from distance. Henry Walsh kicked Roscommon’s second point a minute later after being set up by Hubert Darcy and in the seventh minute Ronan Daly kicked a fine score to put the defending champions six points to the good.

Mayo finally got the scoreboard ticking when Fionan Duffy kicked a neat score after being set up by Coen ten minutes in. Irwin had a chance to cut the gap back a bit from a free two minutes later, but he scuffed his effort wide on the near side. Ultan Harney stretched the Roscommon lead back out to six points on the quarter of an hour mark as the Mayo defence looked like it was about to collapse under the pressure. Mayo made their first switch of the game 17 minutes, brining in Eoin O’Donghue for Eddie Doran in an attempt to hold back the Roscommon tide.

Mayo did start to get a foothold in the game in the final third of the first half, Conor Loftus pointed a free after Brian Reape was fouled, then Irwin followed it up with another point from a 45. Diarmuid Murtagh put an end to Mayo’s little scoring burst with another well taken point four minutes from the short whistle. That was followed by another Daly point, with Mayo replying through a pointed free from Irwin from out on the 45m line. Just before the break, Roscommon saw influential full back Sean Mullolly shown a black card but they still went in leading 1-6 to 0-4.

Mayo needed a big second half if they were going to win this game and that’s exactly what they delivered. While Flanagan was called into action right from the off to save brilliantly from Murtagh, Mayo were the first to raise the white flag in the half, when Loftus clipped over from the left hand side after Fergal Boland had been fouled. Boland then found the target from distance with a crisply taken effort and just before the 40 minute mark Irwin made it only a two point game with a expertly taken free. 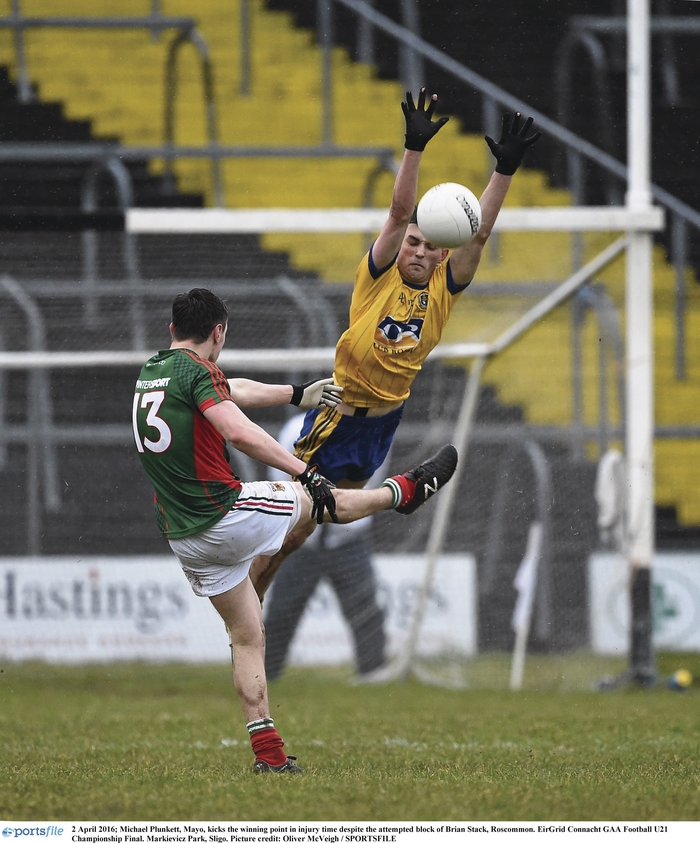 Roscommon did reply to this flurry with a Daly point, but Mayo knew they were in this game in a big way now and they kept the pressure up. Brian Reape kicked a lovely point on the turn after being found by Irwin, to bring it back it back to just two points between the sides. A Murtagh pointed free made it 1-8 to 0-8 with a quarter of the game left, but the momentum had turned in Michael Solan’s mens favour.

Irwin and Duffy kicked scores to leave just one in it with eight minutes to go, Brian Stack kicked a great score to edge Roscommon back in front by two 55 minutes in, but less than a minute later the biggest score of the game arrived.

James Carr who had only come on a few minutes earlier arrowed the ball into the space between Regan Fahy in the Roscommon goal and his full back line. Liam Irwin showed strength and a goal scorers instinct to get to the ball before anyone and flick it to the net to put Mayo into the lead for the first rime in the game.

There was still time for plenty more drama and Murtagh levelled it up as the game edged into injury time, it was now about which side could hold their nerve and take the chance when it presented itself and it was Mayo who did just that, when Michael Plunkett was able to find himself with a few yards of space to arch the ball over the bar from 35 meters out two minutes into injury time. But Mayo did have to hold their nerves a little bit longer as Roscommon threw everything they had at them to try and get an equalising score, but Mayo the Mayo defence, hunted and harried without letting them get a clear sight of goal and held on for the win.