Mayo showed the kind of fight and heart that will have given their supporters plenty of cause for optimism going into the rest of the league campaign which will return at the tail end of the month. However, despite that fight and heart Mayo are still pointless after their first two rounds of action in the league and now face into two tough road trips to Ulster on the bounce before the final swing of three games at the tail end of Spring.

In a tough and hard fought encounter Jim Gavin’s side held on for two point win from a game that was played in retched conditions in MacHale Park. The first major incident of the game saw Philly McMahon shown a black card by just five minutes in after a tussle with Aidan O’Shea. Diarmuid O’Connor fisted Mayo into the lead shortly after, but Mayo missed a couple of chances to stretch out their lead. 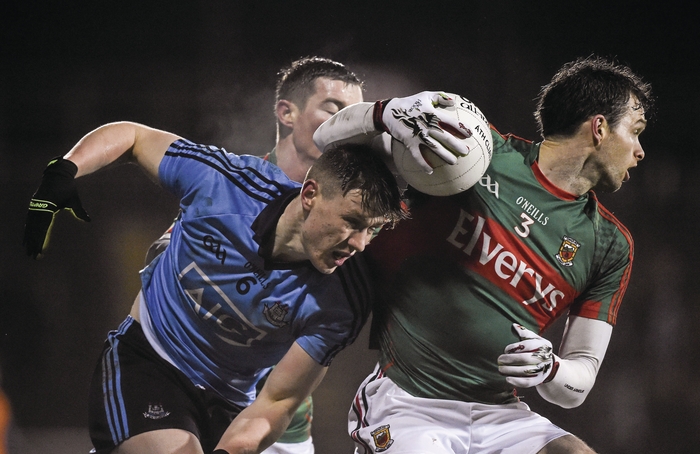 Dean Rock restored parity from a placed ball and then on 19 minutes Diarmuid Connolly fried over a great score to put Dublin into the lead after Aidan O’Shea lost the ball. Three minutes later Evan Regan got in on goal and had a chance to fire it past Stephen Cluxton but his effort went him and over the bar to level thing up. Ten minutes before the break, Robert Hennelly split the posts with a monster of an effort from a 45’ into the teeth of the gale that was blowing down the field with plenty to spare to put Mayo back into the lead. That lead lasted less than a minute as Dublin responded through a Dennis Bastick point.

Dublin added on another point before the break through a Dean Rock 45’ and went in leading on a scoreline of 0-4 to 0-3. Jason Gibbons who didn’t start the game despite being named in the starting 15 on Friday night came in at half time for Tom Parsons.

It took six minutes for the first score of the second half to arrive and it came from a fine Diarmuid O’Connor point, Mayo had a chance before that to level it up from an Evan Regan free but the Ballina man miscued his effort.

Dublin responded with two points on the bounce, the first from a Dean Rock free and that was followed by a James McCarthy effort. On 47 minutes Rock stretched the visitors lead out to three points with another well hit effort from a placed ball.

Aidan O’Shea looked to have earned Mayo a free from close range after he was tackled to the ground by three Dublin players, but the referee gave a free out the other way for over carrying the ball. Not long after Regan cut the gap back to just two with a point from another free. Five minutes from time Cormac Costello who had just come on kicked Dublin’s eighth point and a minute later Robbie Hennelly kicked his second 45’ of the night to leave the score 0-8 to 0-6, but it’s the Dubs who get the next score with Emmet Ó Conghaile restoring their three point lead, Regan closed the gap back to two not long after. 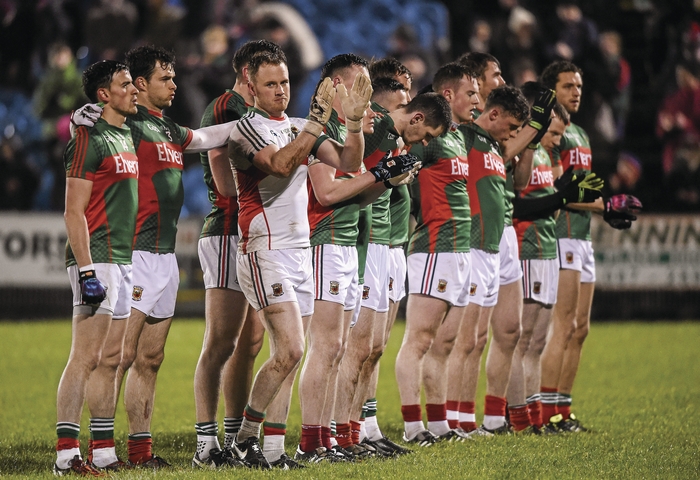 There was still time for both sides to be reduced to 14 men with Colm Boyle and John Small both being shown second yellow cards after a number of players got involved in a tangle in front of the goal at the Bacon Factory end of the ground.