There’s nothing won on the last day of January of note, but Mayo will hope that this will be the worst day they have this year as Cork ran riot on Leeside. Every game is different and Mayo came into it shorn of a number of key men that will surely be big players later on this year, but it still must be taken on its merits as a contest over 70 minutes and in this contest Mayo were so far second best that they game was never a contest from as early as the 20th minute when Cork put themselves three points clear.

The scoreboard could have had much worse of a reading at the end of the game, had Robbie Hennelly not saved a penalty and made a couple of top class one on one saves as Cork looked to keep their foot to Mayo’s throat in the second half. 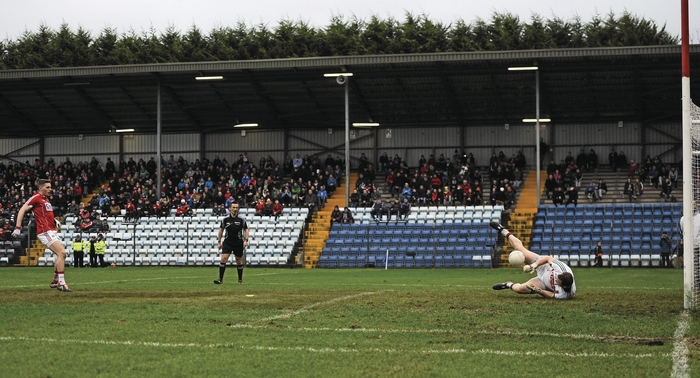 Mayo made a number of changes from the side that was named on Friday night with Aidan O’Shea dropping the bench with his younger brother Conor taking his place in the starting 15 and Colm Boyle coming in for Shane McHale before throw in. Mayo then lost Kevin McLoughlin before the break with a tight hamstring and Lee Keegan had to leave the action a few minutes after a clash of heads with Cork full back Eoin Cadogan early in the second half, two more injury headaches that Stephen Rochford could do with out before Dublin come to Castlebar next Saturday night.

Cork raced into an early two point lead thanks to pointed frees one each from their deadly inside duo of Brian Hurley and Daniel Goulding. Mayo levelled the game up by the eighth minute thanks to a brace of points from Jason Doherty one from play the other a placed ball. The Burrishoole man looked lively and dangerous early on, but the supply of ball into him was soon cut off.

Cork were about to put the foot down and run off four points with out response with Hurley slottting overt two scores in quick succession, his first in this run coming after Cadogan won the ball on his own 21 yard line and he charged 70m down the field without a Mayo hand being laid on him before he slipped in Hurley. Tomas Clancy drove over a fine score from the left for his sides fifth point and Paul Kerrigan had acres of space to hit a nice point.

Mayo’s frist score in 15 minutes came from Conor O’Shea who came into the game well after an iffy start that saw the ball bounce off him a few times when he should have been able to win it clean. That score was quickly wiped out by a Daniel Goulding point 11 minutes before the break and Cork went on to outscore Mayo by 0-5 to 0-1 before the turn around, when they went in leading by 0-12 to 0-4. Mayo only managed to match Corks total on the scoreboard at the break four minutes into injury time when Mikie Sweeney hit their last point of the day.

Goulding added on three more points before the break with Luke Connolly and Brian O’Driscoll also getting in on the act as Cork runners broke through the heart of the Mayo defence with worrying regularity and ease, with Lee Keegan responding with Mayo’s fourth point of the day two minutes from the short whistle. 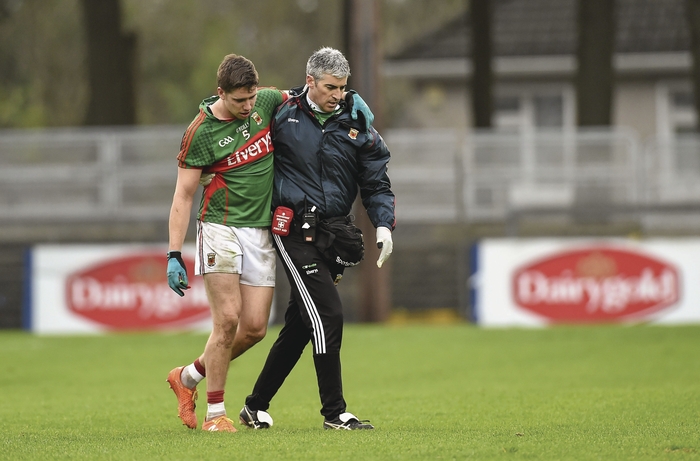 The second half started off with more of the same with Ian Maguire, Hurley and Kerrigan all putting the ball over the bar inside the opening eight minutes. Nine mintues into the half Kerrigan was fouled and Cork were awarded a penalty, but to Mayo’s relief Goulding’s effort was well saved by Robbie Hennelly who stretched well to his left. But that was only a brief reprieve and Cork kicked the next scores of the game to put them into a 0-17 to 0-4 lead with 47 mintues gone. Mayo didn’t mange to raise a white flag in anger until the 50th minute when Conor O’Shea fired over his second of the day 18 minutes and some injury time change after Keegan’s effort for Mayo at the tail end of the first half.

Mayo did hit a bit of form in front of the posts over the next few minutes with Mikie Sweeney and Evan Regan pointing, but a two minute period between the 19th and 21st minute saw Cork round off their scoring with a burst of 1-1, the point coming from Kerrigan and Hurley finding the back of the net from Cork’s second penalty after Michael Hall was judged to have fouled Mark Collins.

Mayo did manage to tag on four more points before the final whistle, but by that stage Cork were winding down and the numbers in the ground were beginning to dwindle as a few who made the long journey south decided to get a jump on the traffic. 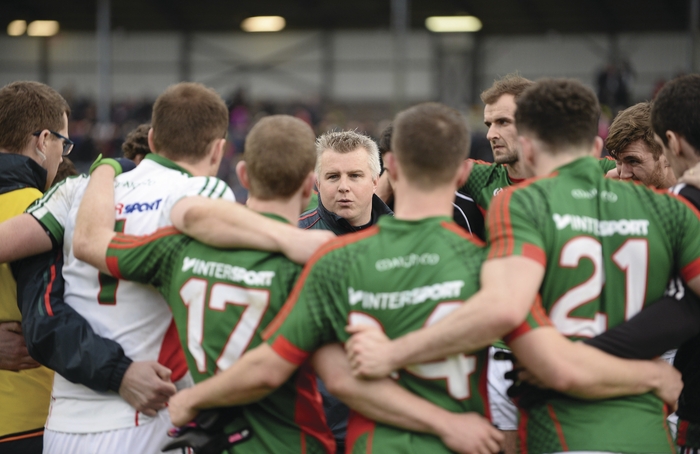 It was harsh welcome to division one football for Stephen Rochford as Mayo manager, but Rochford knows it’s a long road ahead yet and there’s plenty work to be done over the coming months.