Cora Staunton has been the difference between Mayo winning and losing games on countless occasions down through the years, and last weekend the Carancon ace was once again the one who delivered when they needed it most.

Mayo looked to have their qualifier game against Westmeath well under control at half time in Pearse Park last Saturday as they went in leading by 2-6 to 0-7, but a strong fight back from the Lakeside County saw them level the game up coming down the home straight thanks to an outstanding Sarah Dolan goal. But Mayo dug deep and Staunton showed nerves of steel to point an injury time free to steer Peter Clarke’s side to a narrow win setting up tomorrow evening’s clash with the Rebels in Tullamore.

Cora Staunton and Sarah Rowe grabbed Mayo’s goals in the first half, with the returning Rowe, who had been on international soccer duty with the Republic of Ireland u19 side in recent weeks, getting the player of the game award for her contribution of 1-1 and her overall play over the 60 minutes. Staunton grabbed her side’s third goal 10 minutes from time and looked to have the game wrapped up for Mayo, but the midlanders fought back again to set up the thrilling finish. 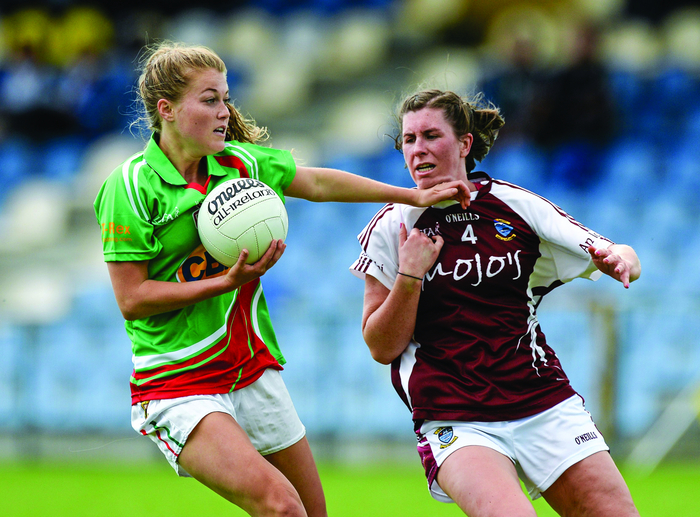 Description:Back in the green and red: Sarah Rowe picked up the player of the game award for her performance last weekend. Photo: Sportsfile

Tomorrow evening in the Offaly venue, Mayo will face a Cork team who won the Munster senior title back in July with an impressive 6-14 to 2-11 win over Kerry in Rathmore. Cork are also the defending All Ireland champions and it is going to be a serious test for Peter Clarke’s charges to take down the Rebels. Emma Farmer grabbed three goals for Cork in their Munster final win, while Valerie Mulcahy and Breege Corkery also got in on the goalscoring act for Cork. The sides last met in the opening rounds of the National Football League in February with Cork winning by two points on a score of 1-10 to 1-8 in Mallow, on that day Cora Staunton was the only player to score for Mayo. This time around Mayo will need a further spread of scorers to keep up with the Rebels’ star studded line up.

Clarke will be hoping the likes of Rowe, Fiona McHale, Aoife Herbert, and Kathryn Sullivan can keep chipping in with points, while Caoilfhionn Connolly, Helena Lohan, and Martha Carter will have to be on top form to keep the gate shut in front of Yvonne Byrne.

If Mayo can keep themselves in the game as it goes down the home straight they have the quality and experience to get themselves over the line, but it is going to be one almighty challenge for them to get over, and after getting out of jail last weekend they know a big improvement will be needed tomorrow evening. The game throws in at 6pm in Tullamore and is live on TG4.