They could have forced it to extra time at the death, when Aiden Orme took aim from the stand side of the field and kicked for a point but his effort tailed just wide of the target and from Connor Gleeson’s kick-out David Coldrick blew the final whistle.

Mayo and Galway clashes in the championship are always special occasions and the crowds were still making their way into the Castlebar venue as the ball was been thrown.

But when all was said and done it was those making the trip along the n17 and south of the border that left with broad smiles on their faces, while Mayo will have to go back to the drawing board and think it all up again before the qualifiers begin.

Mayo will have plenty of regrets from this one, they hit 12 wides over the course of the contest to Galway’s three. They faded out of the game for in the third quarter and let Galway build up a six point lead and facing a huge hole they just couldn’t dig themselves out of down the home straight.

The Tribesmen played a more direct and effect brand of football in attack, leaving space for their key men and hitting them with direct and purposeful balls in, while Mayo had were forced to recycle the ball over and over as they looked for chinks in a Galway defence that has much improved since their division two final league final loss to Roscommon.

Galway hit Mayo right from the off. With the breeze at their backs they dropped their half forward line back and left space in side for Damien Comer and Shane Walsh to cause the Mayo defence problems. 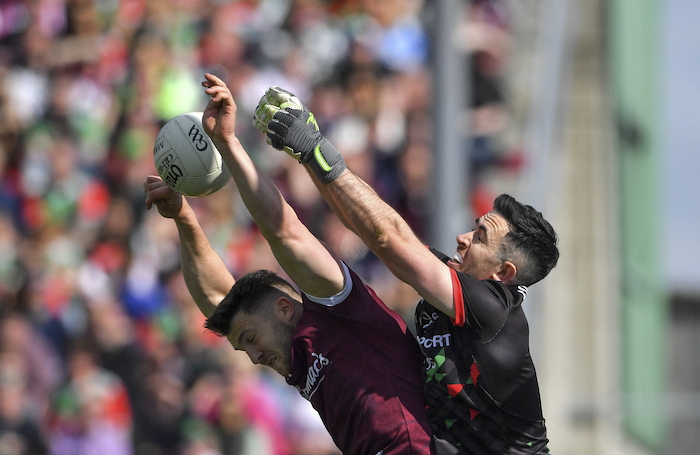 Up and under: Rory Byrne contests the ball with Damien Comer. Photo: Sportsfile

Walsh opened the scoring sweeping the ball over the bar after beating Oisin Mullin to the ball and collecting a Conroy pass inside the opening 60 seconds.

Mayo did hit back straight away through a Cillian O’Connor free after James Carr had been fouled, but it was only brief respite for Mayo. Robert Finnerty got Galway’s second score again after a Conroy delivery in which dropped short and Damien Comer was able to contest with Rory Byrne to spill the ball into his teammates favour.

Nail Daly had Galway 0-3 to 0-1 up six minutes in and a few seconds later they were five clear when Johnny Heaney was able to beat Aidan O’Shea to a cross field pass from Damien Comer and roll the ball to the back of the net and the Galway crowd were humming.

Ryan O’Donoghue stopped the bleeding with a well taken mark, but from the next ball Galway worked it down the field with Conroy and Dylan McHugh combining before unleashing Comer who put the ball over the bar to keep Galway four in front.

Cillian O’Connor did respond for Mayo with a brace of frees to make it a three point game before the quarter of an hour and then Eoghan McLaughlin powered down the left flank to leave just two between the sides.

Mayo were given a man advantage for ten minutes when Finnian Ó’Laoí was shown a black card for an off the ball challenge on Cillian O’Connor and from the next play Diarmuid O’Connor cut the deficit to the bare minimum with a well taken effort from the left wing.

Walsh edged Galway back in front from a placed ball, but a brace of points from O’Donoghue inside 90 seconds had the game all square with 28 minutes on the clock. Conroy put the Galwegians back in front as the half hour mark went by and the pressure began to build in the spring sunshine.

Mayo pulled themselves level once more when James Carr showed nimble feet to get inside his man and push the ball between the posts. They then had a chance to edge in front form a close range free, but Cillian O’Connor was unable to convert from tight angle taking it on with his weaker foot.

Right before the half time whistle a dashing move saw Mayo cut in for a goal chance, but Jason Doherty’s effort was blocked out by the Galway defence. 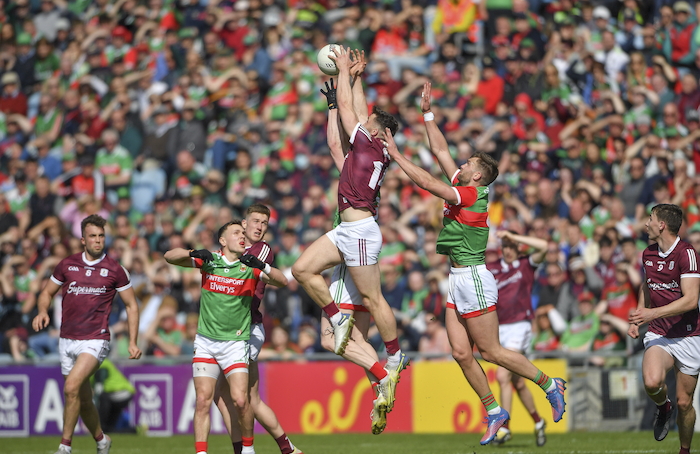 The second half started well for Mayo with Carr pushing them in front for the only time in the game just after the restart. But disaster struck when Oisin Mullin pulled up injured mid flight and had to be replaced.

Galway sensed the game was there for them and they were about to put the foot down and reeled off six points on the spin over the next 18 minutes.

Kieran Molloy came up from the back to level it up, Shane Walsh eased over a 45 from the right hand side, Cillian McDaid wasted no time after his introduction to point and put Galway three clear.

Walsh then drove over a free from 48 meter out and another 45, before Conroy finished off the run with an well worked point and Galway were five up and looking good, with Mayo taking on serious water and looking a well beaten side.

O’Connor tapped over a free from the 45m line and then dropped one short form closer in as Mayo looked to close the gap. Galway responded with points from Conroy and Heaney to push themselves six clear with ten to go.

Mayo did rally and almost pull off a great escape. Lee Keegan showed all his experience to kick a point, then O’Donoghue swept over his fourth of the day. Cillian O’Connor tagged on two points from frees as the game moved into the world of injury time. Kevin McLoughlin got Mayo back to within a point with time still left to go.

The crowd were on their feet at this stage and Mayo went for it and with their final fling the ball was worked to Orme who showed bravery in taking on the effort rather than trying to work the ball around for someone else to put their hand up - but his effort tailed just wide and that was all that was to be written about this chapter of the Mayo and Galway story. Plenty more will be written in the time to come.