The torrential rain that poured down in the late afternoon in Tralee didn’t dampen the spirits of the large crowd who snaked along the outside of the ground in the effort to get a seat in the stand in Austin Stack Park.

The result might not have been what the Mayo hoard who made the long journey south had hoped for - but they were treated to an epic prologue for what could become the rivalry of the Summer.

Kerry kept the points at home, edging it with an injury time free from the boot of David Clifford after a sloppy foul by Aidan O’Shea as bodies and minds were aching after a full throated 70 minutes of battle.

Watch full-time highlights as @Kerry_Official beat @MayoGAA by a point in the Allianz Leagues pic.twitter.com/yQu5xRs0h7

The sold out signs had been put up early in the week in this fixture and it had a little bit of everything, while also holding plenty back for a potential summer re-run when the honours will be handed out.

Mayo trailed by three points at the break with Tony Brosnan’s excellently worked goal the score that separated the sides, it probably should have been level with Mayo missing two good goal chances, with Aiden Orme and Diarmuid O’Connor both going close after some neat play sent them through.

Matthew Ruane opened the scoring inside the opening few minutes with a well taken left foot effort, but Kerry reeled off the next four points on the bounce. The got the scores through a brace of Jack Savage frees and points from David Clifford and Brosnan.

Clifford was picked up by Oisin Mullin from the get go, with Padraig O’Hora also covering back in front of the Fossa sharpshooter at times.

Mayo had the gap back to a single point by the quarter of an hour mark thanks to a close range free from Ryan O’Donoghue after Aiden Orme was fouled and a Fergal Boland fisted effort after Matthew Ruane had intercepted a short kick out from Shane Murphy.

Mayo should have hit the back of the Kerry net on 17 minutes when Orme and Aidan O’Shea combined with O’She dropping the ball into his path, but the Knockmore man pulled the ball wide of the near post. 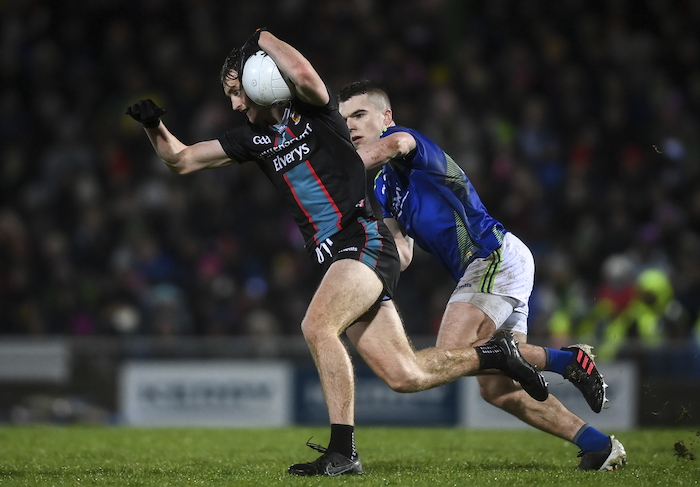 On the run: Jack Carney tries to make a break for Mayo. Photo: Sportsfile

Three minutes later Kerry had the ball in the back of the Mayo net after the broke at speed following a turnover of Mayo up the field the ball was worked through the hands of David Clifford and Adrian Spillane before it was grasped by Brosnan who was breaking at pace and he fired it powerfully past Rob Hennelly. Two minutes later Clifford fired over his second of the day to put Kerry 1-5 to 0-3 up.

Mayo responded through an O’Donoghue free after O’Shea had been fouled and quick fire effort from Boland from out on the left to leave three between them. Clifford pointed from a close range after Stephen Coen was turned over after winning a kick out to put four between them again.

Mayo’s second big goal chance came not long after when Diarmuid O;Connor was played in down the left but Murphy got his hand to the ball to put it out for a 45 which was converted by Hennelly to leave the score at 1-6 to 0-6 at the half time break.

Brosnan pushed Kerry four to the good not long after the resumption, but Mayo hit back through an O’Donoghue free and Boland’s third point from play to close the gap to two.

David Clifford then took on Mullin down the stand side and was able to beat him and break from goal, but he pulled his effort high and it just about crept inside the post to leave a major between the teams.

Mayo kept going and Ryan O’Donoghue won a mark he had no right to win and slotted it over the bar, before Orme landed a fine effort to leave the game keenly balanced at 1-9 to 0-10 with 53 minutes gone on the clock. The hosts were able to put three between them thanks to good Jack Barry score from play with 15 minutes left in normal time, and there was still plenty of drama left to unfold down the home straight.

O’Donoghue closed the gap back again to two points from a free after he was found himself trying to win the ball out on the terrace side of the park. Rob Hennelly strode up the filed to take a long range free with nine minutes left on the clock, he pulled his effort wide - but not for the first time Mayo got a second bite at it for encroaching by an opposition defender. O’Donoghue took on the retake and made no mistake, leaving just one between the teams.

A minute later it was all square thanks to a fine Matthew Ruane effort - and the crowd was on it’s feet, the reverberations around the ground doing a fine job of drying off the drenched clothes the of those packed inside the stadium,

With five minutes on the clock Clifford did as he does and slotted over a free with the aid of the inside of the near post to edge Kerry back in front. Mayo kept driving on and Paddy Durcan had two efforts that he pulled wide - but as the game moved into injury time, Oisin Mullin got a fortunate enough looking free and O’Donoghue made no mistake.

There was still time for more drama as Mayo desperately tried to force Kerry into a turnover and not give a way a foul, they did just that and Clifford put the Kingdom back into the lead. Mayo still had time to try and work one last effort and Lee Keegan was the man to take it on, but it drifted just wide of the near post.

A defeat on the road, but plenty learned and plenty more to look forward to if these two sides get to do it all over again later on this year