Mayo picked up their first win over Dublin in the league in a decade and first in the capital in since the 1970s with a comprehensive victory over their old foes on Saturday night.

The rain spilled for the evening, but that failed to dampen the Mayo supporters spirits as James Horan’s side led from starting gun to finishing line tape in Croke Park.

Right from the opening seconds when Diarmuid O’Connor pointed after being picked out by a excellent pass from Jordan Flynn they looked to be in control, even when Dublin went two up just before the quarter-hour mark - Mayo were playing the better football and looking the more likely side to wrestle control of the contest.

Not long after O’Connor’s opening point, Mayo had the ball in the back of the net through Matthew Ruane, but the play was called back by David Gough for what looked like a hard call for the ball being picked off the ground in the build up.

Ruane did manage to get the next point of the day after Ryan O’Donoghue and Paul Towey did the ground work. O’Donoghue who was Mayo’s top scorer in the league coming into the game didn’t get on the score sheet in this one, but was a bundle fo energy throughout - working hard and working frees quickly as Mayo looked to go for the throat.

Sean Bugler got Dublin’s first score of the evening seven minutes in and they reeled off three more on the bounce through Ciaran Kilkenny and brace of Dean Rock free’s to go two up - but a Ruane settler from out on the Cusack stand side brought Mayo back to within one 17 minutes in.

Oisin Mullin who was making his first start for the side this season levelled it up not long after with a well taken effort from the Hogan stand side of the field after O’Donoghue opted in slowing the play down from a free and moved it quickly to the Kilmaine man on the move.

Kilkenny pointed form a mark on the next play to have Dublin back in front but the next score set the momentum for the rest of the game. Diarmuid O’Connor chased the ball down the right flank, kept it from going out of play and worked the ball into Jack Carney who was breaking at pace.

The Kilmeena man who two weeks ago put in a man-of-the-match performance in the All Ireland Club Junior final, didn’t break his stride and drove the ball low, it hit the post but rebounded back of the head of Evan Comerford in the Dublin goal and ended up in the back of the net to push Mayo back into the lead. Aiden Orme pointed a minute later after finding himself one-on-one inside the cover and Mayo were three clear. 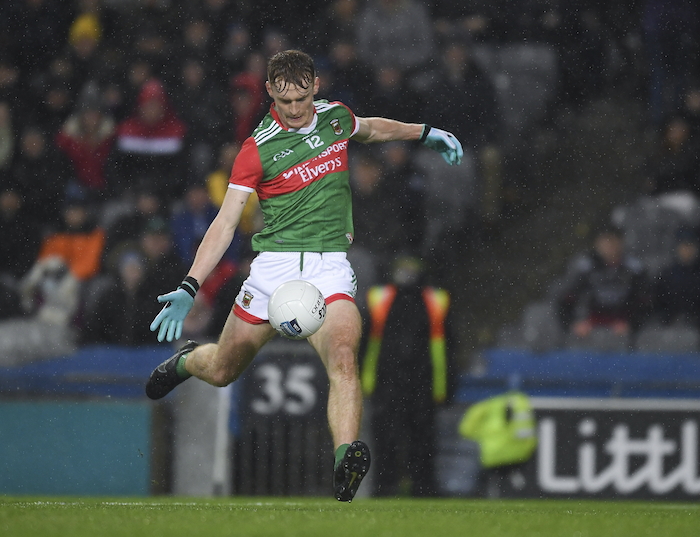 Dublin did respond well to this setback with a Rock free sandwiched between two Ross McGarry points to level it up with half hour gone on the clock. After the second of McGarry’s flutter of scores, Mayo worked the ball down the park and O’Connor picked out Orme who played a one two with O’Donoghue, with the Knockmore man flicking the ball to the net from close range for Mayo’s second goal of the day.

Kilkenny hit back for Dublin with a classy score to bring it back to a two point game - but Mayo were able to stretch it back out to three before the break, with Rob Hennelly converting a touchline 45 to send Mayo in leading 2-6 to 0-9 at the short whistle.

The second half was a touch lighter on the scoring as Mayo managed their way through the final 35 minutes with relative ease, restricting Dublin to just three points and only Lorcan Dell’s shot that was excellently saved by Hennelly on 45 minutes - the only serious threat on their goal.

Hennelly got the scoring going in the second half with a long range free from the Cusack Stand side into the Canal End. Dell’s chance came not long after that and brace of points from Michael Plunkett and Bryan Walsh settled Mayo’s nerves as the game moved into it’s final quarter. 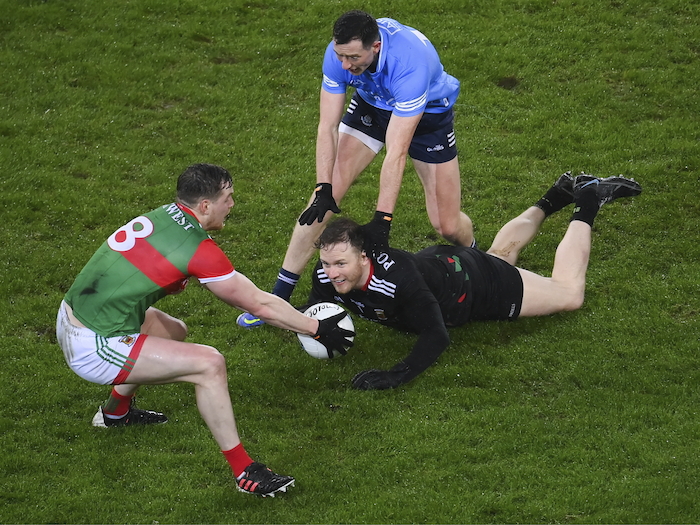 Working it out: Rob Hennelly gets the ball away to Matthew Ruane under pressure from Ryan Basquel. Photo: Sportsfile

There were flashes of the old Dublin with some patient build up play, but the final pass at times and the disparity in the class of player that Kilkenny and Rock were trying to feed the ball to compared to their glory days saw Mayo cut out a number of those final passes, along with half a dozen wides from the metropolitans.

Another Plunkett point and a final one from O’Connor put the full stop on the Mayo scoring for the evening and made sure the two points were being packed up in the bus and heading back west with Mayo, as the look to the next challenge coming up over the horizon shortly.