Mayo picked up their first win of 2022 after a hard fought win over Monaghan in Clones on Sunday.

Goals in either half from Ryan O’Donoghue, who finished up the day with 1-6 and Jason Doherty proved key for James Horan’s men, who also had to deal with losing Eoghan McLaughlin to injury late in the first half.

The Ulster men started brightly with Gary Mohan putting them in the lead, and they almost got in for a goal with Mícheál Bannigan pulling on the ball, but his effort was well saved by Rob Hennelly.

Mayo struck the back of the net six minutes in after a beautiful drop of the shoulder to create the space to fire it past Rory Beggan. That was quickly followed by a Fionn McDonagh point, but the hosts struck back not long afterwards.

Brannigan cut down the stand side of the field and drew in defenders before moving the ball across to Jack McCarron who had the easy task of flicking the ball to the back of the net. Monaghan kept the pressure up and the kicked three of the next four points from McCarron, Karl O’Connell and Andrew Woods to push their side into the lead. Mayo were able to stay in touch thanks to a free from O’Donoghue.

Mayo levelled it up thanks to a fine score off his left from Diarmuid O’Connor and another from distance by Conor O’Shea. The scores kept coming with Monaghan adding on scores from Mohan, McCarron and Shane Carey with Ryan O’Donoghue replying with two points from frees for Mayo to leave a point between the teams on a score of 1-8 to 1-7 in favour of the home side.

The second half saw the scoring rate slow down, but it opened up with O’Donghue and Carey swapping points from frees not long after the restart. The Belmullet man then looked to have got a second goal, but his flicked effort was ruled out for a push on Conor Boyle in the build up. 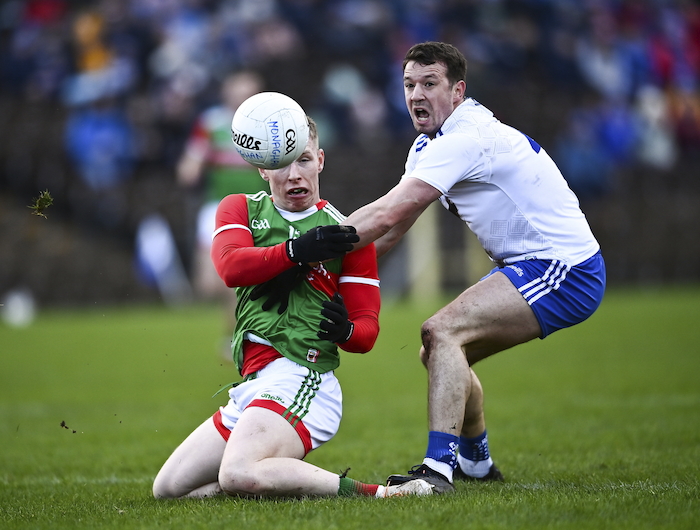 Battling for the ball: Ryan O'Donoghue battles to control the ball. Photo: Sportsfile

Monaghan went two clear when Woods drifted in a long range effort using the breeze, however the game was turned in Mayo’s favour on 54 minutes when Jason Doherty finished off a fine move, with the final ball coming from a rapid hand-pass from Michael Plunkett.

O’Donoghue and Conor Loftus added points for James Horan’s side, with Conor McManus getting Monaghan’s final score of the game to leave two between the sides as the game was winding down.

Mayo managed to repel a late Monaghan goal chance when Ryan McAnespie’s close range effort was blocked and the full time whistle was sounded shortly afterwards. Mayo will be delighted to go home with the points and look forward to a trip to Dublin in a fortnights time.