The story of this day will be talked about and remembered for generations to come in Kilmeena.

They came to Croke Park looking to do something that will go down in history and that is exactly what they did, it may have taken extra time and they probably should have had the game well wrapped up before full time - but that won’t matter one bit, because Kilmeena are All Ireland champions.

As the seconds of normal time ticked down, they were leading by three points and looking like they were going to do enough to see themselves home. But three points is a dangerous lead and one misplaced hand-pass as they tried to work the ball out of their defence, was pounced upon and the game was heading for extra time.

The goal that Padraig Doyle plundered for Gneeveguilla could have been a big momentum shifter in this contest, but Kilmeena are made of strong stuff and they never panicked and went about their business brilliantly in extra time and when the game was there for the wining, they stood up and scores from Joey Smyth and Darragh Keaveney saw them home, with the final whistle being blown seconds after man-of-the-match Jack Carney turned over a Gneeveguila attack to ensure that there was no repeat of what had happened right at the end of normal time.

The game got off to a blistering start with Conor Herlihy breaking through the heart of the Kilmeena defence after the throw-in, but he skewed his effort wide of the posts. Kilmeena went down the field and Keaveney found his range with a fine score from play after some good work saw the ball fed into Niall Ryan, who put it into his path.

Ryan was a prominent figure early in the first half winning a lot of ball for Kilmeena, but an injury midway through the half curtailed his influence on the game. The Kerry men had the game levelled up three minutes in when Shane O’Sullivan slotted over a mark from under the Hogan Stand as both sides started to feel each other out.

John McGlynn put Kilmeena one up on the ten minute mark with after a big run through the heart of the Gneeveguilla defence by Niall Feehan. The lead didn’t last long and it was all tied up again thanks to a point from Sean O’Keefe after some neat build up play down the left-hand-side of the field. 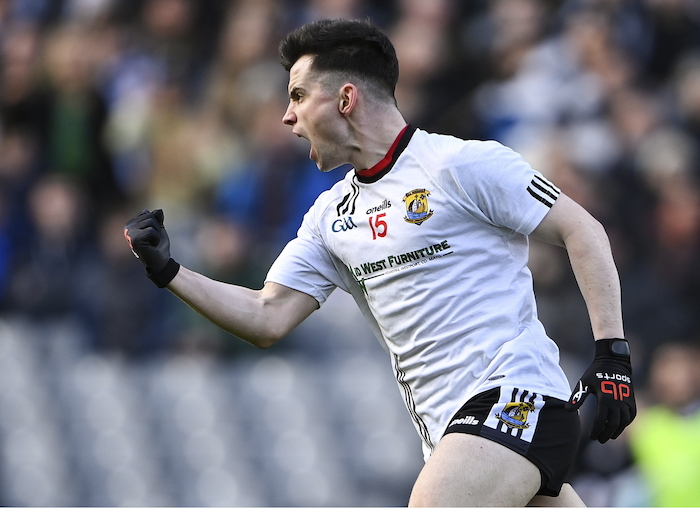 Both sides were finding it difficult in a swirling wind on pitch level, with a number of efforts going wide of the target. Keaveney pulled two efforts from frees wide on the near side in the 17th and 19th minute, before Cornelius Buckley edged the Kerry champions back in front on 20 minutes.

When Keaveny got another crack at a free he put it on the deck and made no mistake to level the game up at three points each on 25 minutes. That score came after Jack Carney was hauled to the ground, but Conor Herlihy as he broke right through the middle of the pitch heading for goal - with the Gneeveguilla man getting a black card for his troubles.

Carney repeated the trick a few minutes later, only to see his effort fly wide of the post after his low shot. Despite being down to 14 men it was the Kerry side who got the final score of the first half thanks to a John O’Leary point, that sent Kilmeena in trailing 0-4 to 0-3 at the half time break.

The second half was dominated by Kilmeena, but they were still having difficulty in finding the target with their shots regularly. Keaveney levelled it up just after the restart from free and captain Sean Ryder cut in and fisted the ball over the bar on 36 minutes to put his side into the lead. A O’Leary free levelled it up five minutes later and that was the last time the Kerry side were to score in the first half, until their injury time equalising goal.

From then on it was all Kilmeena, Keaveney slotted a free and Joey Smyth marked his introduction to the game with a fine point form out on the left. Kilmeena were dominant, but just couldn’t make it count on the scoreboard - with three minutes of normal time left they did manage to push themselves three points clear through a Nellie Duffy point and it looked like they were set for victory.

The Munster champions though dug deep and went hunting a goal, Paul Groden had to pull off a good save, along with some last ditch defending from the Kilmeena defence two minutes form time.

But there was still one last twist left in this game as it moved into injury time, Kilmeena looked to move the ball out of defence through their hands, but a pass was intercepted by Shane O’Sullivan who played in O’Leary, he found Padraig Doyle on the shoulder and he made no mistake driving the ball to the net and sending the game to extra time. 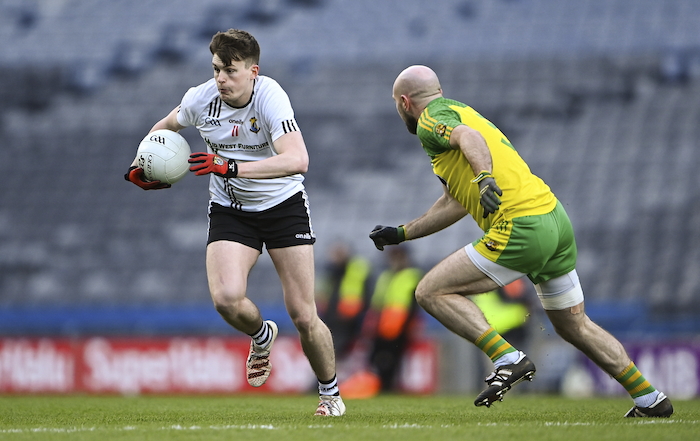 The wind could have been knocked out of their sails, but Kilmeena kept it calm, even after Gneeveguilla got the first score of extra time through Pa Warren they kept their heads and a Keaveny free had it all square at the median whistle in the additional period.

When they needed to be counted in the second half of extra time Kilmeena stood up and delivered. Smyth scythed the ball over the bar off the outside of his boot to push his side ahead and Keaveny had the final say on the day with a fine effort from play to see it out.

When all was said and done, the record books will forever more say Kilmeena All Ireland champions in the year 2022 - and that is something that can never be taken from the men from the shores of Clew Bay.