When they look back on it Knockmore will feel they had the chances to win this game in Ballina, they hit 14 wides over the course of game to the two that their opponents did.

It was Pearses efficiency in front of goal that won the day, with corner forward Paul Carey putting in a towering display of shooting hitting eight points over the hour from right across his forward line.

The game stared in a welter of excitement when Pearses were awarded a penalty three minutes in. They worked the ball well down the field and Hubert Darcey got a flick to the ball to put it into the path of Niall Carty who was fouled by Shane McHale.

Darcy stepped up and drove it right down the middle of the goal to put his side three clear early doors, that was quickly followed Carey’s first score of the day.

Knockmore got the scoreboard going in their direction when Colm Reape wandered up to drive the ball over the bar from distance. It looked like the Knockmore keeper was going to come up to take a 45, but quick thinking from Peter Naughton saw him play the ball back to Naughton who drove it over the bar. 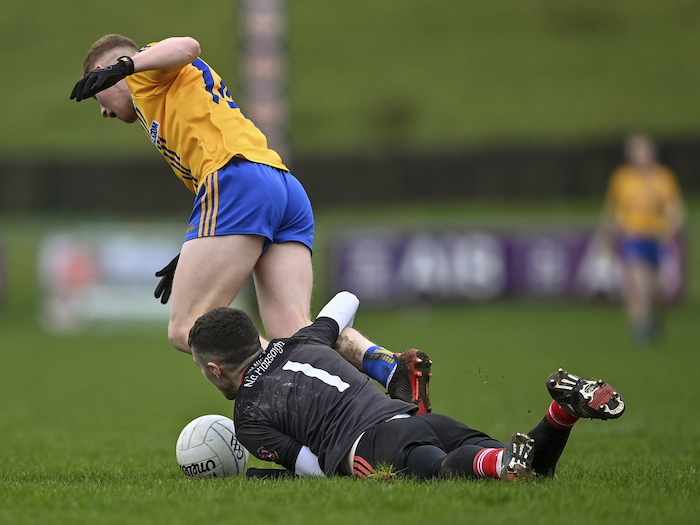 Conor Payne got in on the scoring act for the Roscommon champions with a well taken point after Darcy set him up, to leave the score at 1-2 to 0-1 at the first water break.

Aiden Orme who put in a massive shift for Knockmore got his sides second point of the day from a mark 21 minutes in to cut the gap to three points. From the resulting kick-out they were then handed a big advantage when Orme won the ball back from Pearses keeper’ Paul Whelan and the custodian tripped him resulting to him being sent to the bin for ten minutes.

Darcy made the long trek from full forward to go into goal for the final ten minutes of the half and Orme made no mistake from the resulting free to cut the gap back to two once more. Peter Naughton had a chance to cut it back to a single point game from a free after Shane McHale had claimed a mark that was brought forward after a Pearses defender failed to back off, but Naughton pulled his effort wide of the target.

Carey settled the Pearses nerves with a well taken point two minutes before the break and it was left to Orme to bring it back to a two point game with the final kick of the half.

The second half saw Carey and Naughton swap points early doors, but Pearses were about to ratchet up the pressure. The reeled off five points on the bounce from the 34th minute to the 43rd with Carey getting four of them and Darcy chipping in with the fifth. That put Pearses seven clear and looking good.

But Knockmore were’t throwing in the towel and they flew right back into the contest. Orme pointed from long range and Naughton clipped one over the bar to put five between the teams. Then a big moment shifter came when Darren McHale who had just been introduced took swing for a point. 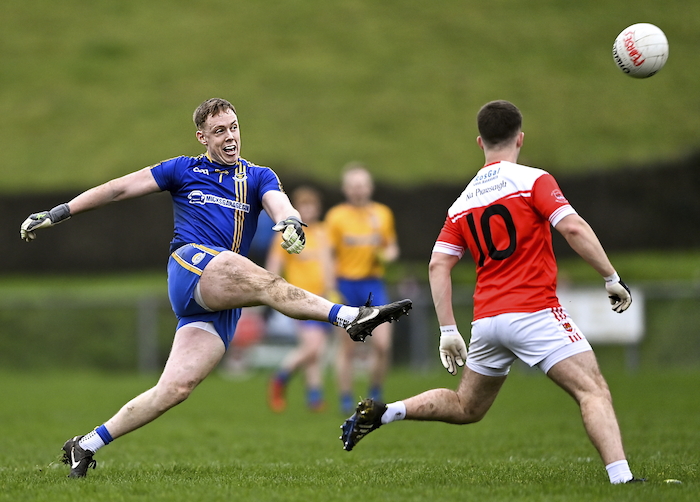 Up and over: Colm Reape kicks Knockmore's first point of the day. Photo: Sportsfile

The ball dropped short and chasing it in was Charlie Bourke who got there just ahead of Whelan to flick it to the net and make it just a two point game on a score fo 1-7 to 1-9 at the second water break.

The eventual champions showed why they won the title when the game got going again, they reeled off the next three points with Carey, Emmett Kelly and Ronan Daly all getting scores.

As for Knockmore they kept creating chances, but kept putting the ball wide of the target and killing their momentum. Keith Ruttledge did get them going again, kicking two points on the spin after coming off the bench and Peter Naughton got another to leave it as a two point game as injury time approached. But Pearses came back strong again and Tom Butler kicked their final point of the day to put three between the sides.

Knockmore did have one last chance deep in injury time when the ball fell to Orme on the edge of the D, the took aim but his effort flew over the bar and the final whistle as blown seconds later.

For Knockmore this brings to an end two glorious years, where they claimed back to back Mayo titles. They’ll learn from this and will be back all guns blazing come championship time in late Summer.