Kevin Lynch stood on a platform six inches off the ground to raise the Sweeney Cup high in the air in Fr O’Hara Park on Saturday afternoon - but Mayo Gaels are standing many feet taller right now than they were this morning, following their 1-11 to 1-9 win over Ballyhaunis.

Lynch gave a graceful and heart-felt speech thanking all the great and good who have put their shoulder to the wheel behind this particular projects in recent years and those who’ve driven it forward for many years before that.

Club football is special, the very essence of the game. The village, the parish and the community all rowing in together, with no guarantee of any return for the efforts, bar a pride of place and people. Then when a side breaks through a glass ceiling finally after many years of trying, it’s something that has to be savoured and enjoyed to the very last drop.

Mayo Gaels were favourites going into the final, James Fallon’s side have done what they needed to do all year - but there still was the fear that things might not work out for them against an experienced side like Ballyhaunis.

It looked for a good period of this game that all Mayo Gaels efforts might come up short on the big day - but when it came to time to stand up and be counted, every single one of them delivered and poured every ounce of their heart and soul into getting over the line and achieving their goal.

Ballyhaunis settled into this game much better, with Keith Higgins rolling back the years playing a quarter-backing roll constantly passing the ball forward and driving with it in hand, something we’ve seen him do for the best part of two decades now.

Jason Coyne pointed a free inside the opening minute after some early nerves saw Ruairi Keane pick the ball off the deck close to his own goal. Morgan Lyons a late change to the Ballyhaunis starting 15 put his team two clear a minute later after he rode two tackles with ease.

Ethan Henry had a pot from 50 yards from a free off the deck of the Gaels with their first foray into the Ballyhaunis half but it dropped short. Coyne pulled a free wide of the target for Ballyhaunis on four minutes, but made up for it with a lovely point after driving run following some good set up play by Jarlath Canny.

Just before the ten minute mark Mayo Gaels finally got their first score of the day when Henry made no mistake from a central position on the 45m line after Keane was fouled as he tried to break the Ballyhaunis cover.

Then three minutes later they were in front. Mayo Gaels have power and strength in abundance and Adam Gallagher showed his, escaping some close contact to find Liam Hughes who cracked an effort that came back off the post. Lynch reacted quickest and fired the ball to the net with a score that looked like it would settle his side.

Adrian Phillips had a go from a placed ball from distance for Ballyhanis - it came back off the post and into the arms of Coyne but he pulled his effort wide a minute later. Phillips made no mistake with an effort from another place ball two minutes later and the sides went in level at 1-1 to 0-4 at the first water break.

The second quarter was all about Ballyhauins - who reeled off four points without reply in impressive style. Higgins cut a hole through the Gaels defence leaving one defender on the ground after a quick change of pace before firing over.

Eoghan Collins drove over a point from distance, then Morgan Lyons rose highest to clip the ball down from the clutches of a defender before collecting it and sweeping it over the bar on the turn from 30 meters out. Higgins got his second of the day after he patiently held on to the ball before finding a chink of space to drive into and hammer the ball between the posts.

That left the score at 0-8 to 1-1 at the break and the East Mayo men in pole position to drive home to victory - but Mayo Gaels weren’t going to bend the knee and they came back out a changed side for the second half.

Coyne and Phillips saw efforts go wide and drop short respectively for Ballyhaunis early doors and five minutes in the Gaels fightback began. Ruairi Keane drove through the heart of his opponents defence and found Jack Fallon in behind the cover - Fallon drew Phillips and cracked an effort at the goal only to see it crash back off the bar, Liam Hughes was on hand to collect the rebound and put it over to bring it back to a three point game.

Fallon brought it back to two points with a fine effort again after Keane had punched a hole in the Ballyhaunis blanket and with ten minutes gone in the half John Gallagher made it a single point game. He finished off a move that was started by a sweet ball from his big brother Adam who stretched the play from one side of the field to another with an astute pass.

However in a flash the momentum swung right back to Ballyhaunis when John Cunnane was able to find James Lyons unmarked behind the Gaels last line of defence and he flashed the ball to the back of the net to stretch it out to a four point game at the second water break.

The break in play allowed Mayo Gaels to regroup and as soon as the final quarter-started they went for it with everything they had.

Fallon cut over a fine score from the right, John Gallagher arched one over two minutes later, then James Jennings landed a point from a play and Mayo Gaels faithful were rocking and believing once more.

With four minutes of normal time left on the clock, Coyne pointed a free to edge Ballyhaunis two in front again - but the Gaels were not going to be denied.

Fallon bombed one over the bar, then Jennings got his second of the day after Hughes had done great work to get his hands on a Ballyhaunis kick-out and find Ronan Commons who was able to slip the pass into Jennings. When the white flag was raised, the roof was lifted off the stand by South Mayo masses.

Things got even louder two minutes later when Adam Gallagher held his nerve and pushed his side in front for only the second time in the game, as the Mayo Gaels supporters dared to do more than dream.

If Gallagher’s point saw them do more than dream, Ethan Heney’s towering effort saw them jump into wonderland and the final whistle that followed no long after singled the reality that the were Mayo intermediate champions and heading into senior football next year.

The action in a hectic weekend of football finals in Mayo got underway on Saturday afternoon in Crossmolina where Kilmeena were crowed Mayo junior champions for the first time in almost two decades.

The West Mayo men had three points to spare over a brave and battling North Mayo opponents who put it up to them all afternoon. 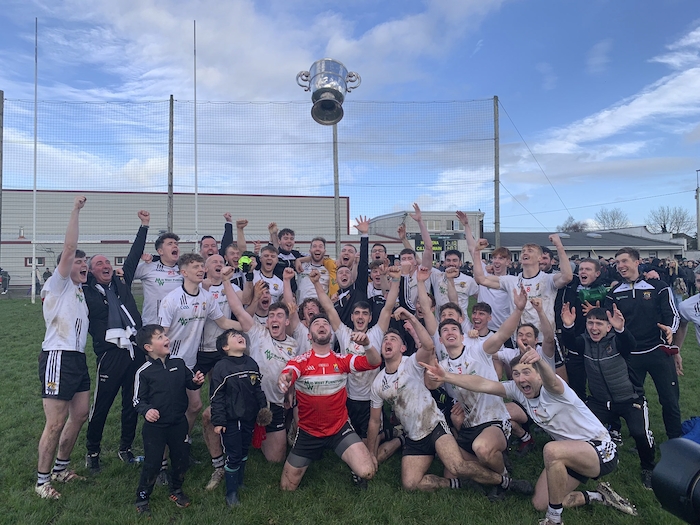 Kilmeena started the game brightly and looked to be in control early on, but a goal from Darragh Murphy 12 minutes in had Cill Chomain in the driving seat.

But a goal from their captain Sean Ryder just before half time settled their nerves and sent them in leading by four points at the break on a score of 1-6 to 1-2.

Cill Chomáin kept coming and they had the gap at just a single point in the second half before Kilmeena were able to up the gears with Ryder kicking two points and Darragh Keaveney also getting point to keep their noses in front by three points - a gap they were able to keep between them and their opponents at the final whistle.