After so many near misses, bad bounces of the ball and agonising moments - Mayo saw off Dublin in the championship for the first time since 2012.

Nothing has been won yet, and there is another monumental challenge coming down the tracks in the All Ireland final - whenever that may be - but days like this are to celebrate and remembered and the Mayo faithful will remember this one.

At half time, it looked like it was going to be another hard-luck story for Mayo. A young team in transition, shorn of their key attacker and another rising star ruled out through injury on the eve of the game were trailing by six points and looking at sixes and sevens, as they let Dublin do their thing. 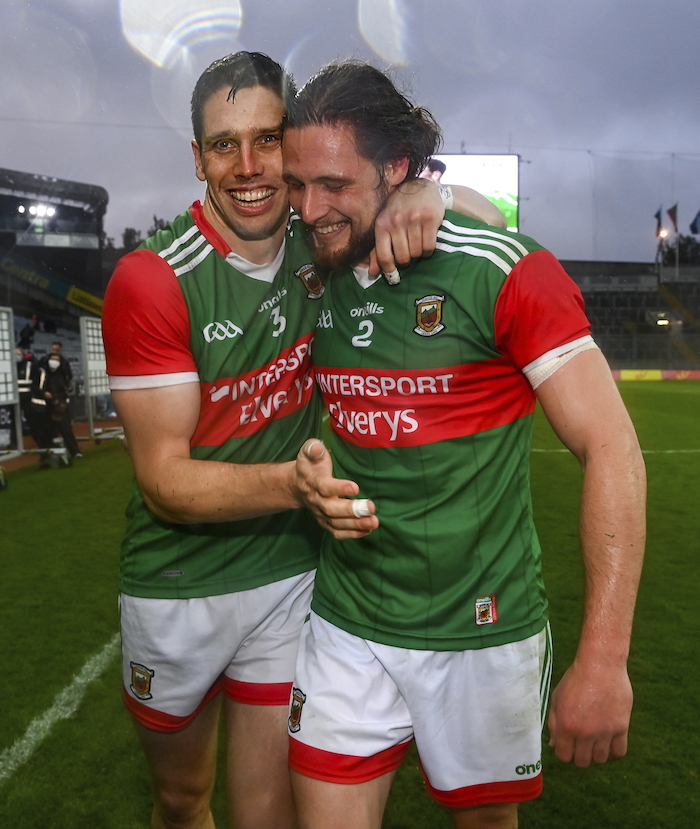 Hold onto the ball, play it around and wait for the chance to appear or a stray hand or hip to give away a free in scoring range. But in the second half, a different Mayo showed up.

They went at Dublin, forced them into turnovers, drove hard at their defence and held their nerve at the very end.

There were many memorable moments in the second 35 minutes, Diarmuid O’Connor stretching out to keep a ball that was drifting over the end line in play that ended up with Kevin McLoughlin getting Mayo’s first score in 11 minutes to bring them back to four points.

Enda Hession coming on early and driving at the Dublin defence all day, causing all sorts of problems, Ryan O’Dongohue’s constant forward driving and dash. Rob Hennelly holding his nerve and driving over a 45 at the death to send the game to extra time and swing the momentum in Mayo’s favour.

Mayo never do it easy and this was no different. Dublin without setting the game alight, looked in total control in the first half. Dean Rock, Ciarán Kilkenny and co were having things their own way, holding on to the ball and popping it over the bar when a chance came up.

Mayo struggled to get to the pitch of the game early on and when they did they were errant in their shooting and found themselves 0-4 to 0-0 down by the ninth minute.

It was 11 minutes in when Matthew Ruane drove over their first point of the day but Dublin responded through Kilkenny score to go 0-5 to 0-1 up. Ryan O’Donoghue pointed a free, before Rock landed another point to send Dublin in leading 0-6 to 0-2 at the first water break.

Things didn’t get better for Mayo in the second quarter, Rock rolled off two on the bounce and Paddy Small put Dublin seven clear. 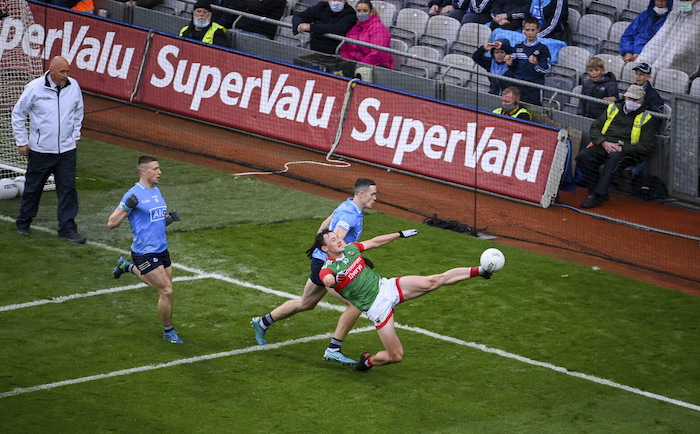 Not on my watch: Diarmuid O'Connor keeps the ball from going wide, setting up Kevin McLoughlin's point. Photo: Sportsfile

Hennelly hit a Mayo’s second point from a long range free, but Dublin hit back right away with a Kilkenny mark for Dublin’s tenth point of the half.

Mayo did manage to get a score before the break when Conor Loftus hit one from distance to leave a six point gap between the teams, but it looked like Mayo were a long way off bridging that gap. 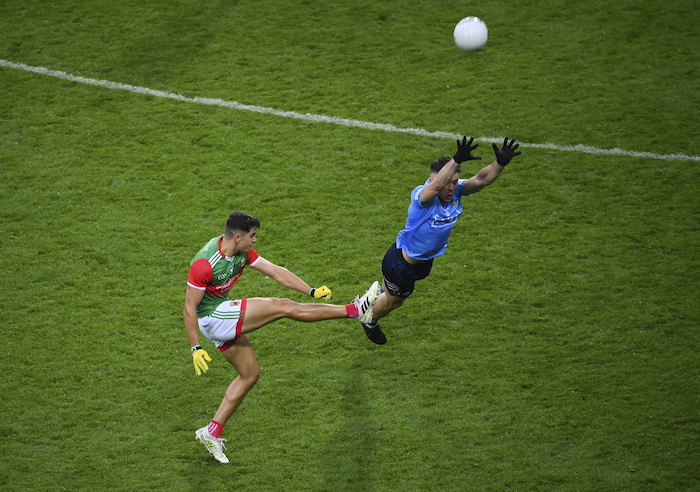 Up and over: Tommy Conroy takes aim for Mayo. Photo: Sportsfie

But, this team or to be more exact teams with various contingent parts of this team have gone to the well before and know how to come out out fighting and they did just that.

Three points in the third quarter through O’Donoghue, Hennelly and Keegan and keeping Dublin scoreless in that period gave the faithful hope.

Two quick fire points from Small and Rock, looked like it was going to be enough to see Dublin hold off the Mayo challenge. But O’Connor’s end line intervention kick-started a final round rally the was fit to grace the greatest of games.

Jordan Flynn, hit Mayo’s ninth points, O’Dongohue put over a free and Tommy Conroy found his range and there was two in it.

Dublin hit back when Rock put a free over from the Hogan Stand side just on 70 minutes, but there was seven minutes injury time.

O’Donoghue pointed a free after McLoughlin was fouled on the break and there was just one point in it. Mayo went hunting and hassling, Conor O’Shea forced a turnover on the line and Mayo got a 45.

Hennelly stood up and took a crack, it was drifting wide, but referee Conor Lane blew the whistle for him to take it again as there was too many players on the field when a sub was taking place. The Breaffy shot stopper held his nerve from the rest and drove it true and over the bar sending the game to extra time.

Dublin got the first score of extra time when Sean Bugler pointed, but from then on it was Mayo all the way. Conroy hit two on the bounce, Darren Coen drove over a long ranger and O’Donoghue got another and Mayo were three clear at the break an advantage they held onto right to the final whistle.