Mayo were given a rude lesson in the level they need to reach if they want to get back to the summit of the ladies’ game in Limerick on Saturday evening.

Dublin were at their ruthless best running in four goals against a Mayo side who will regret missing a number of chances for goals themselves that could have kept them in touch with the All Ireland champions down the home straight.

Michael Moyles and his management team are still only a work in progress at the moment and with three championship games coming up - they will hope that they can get some more ground work in before that gets underway.

While they will be disappointed with the result, the game itself has given them a pathway they know they will have to try and travel down if they are to get another crack at Dublin come the business end of the season.

Mayo starred the game brightly with Niamh Kelly firing over a fine point on the run from the left hand side a minute into the game, but it was to be the last time in the entire contest that Mayo were ahead of the Dubs.

The metropolitans were back on level terms two minutes later when Hannah Tyrell pointed a free and a minute later Dublin hit their first goal of the day. Niamh Hetherton finished from close range after Jennifer Dunne took the smart option and hand-passed the ball across the face of goal to Hetherton who was in a better position. 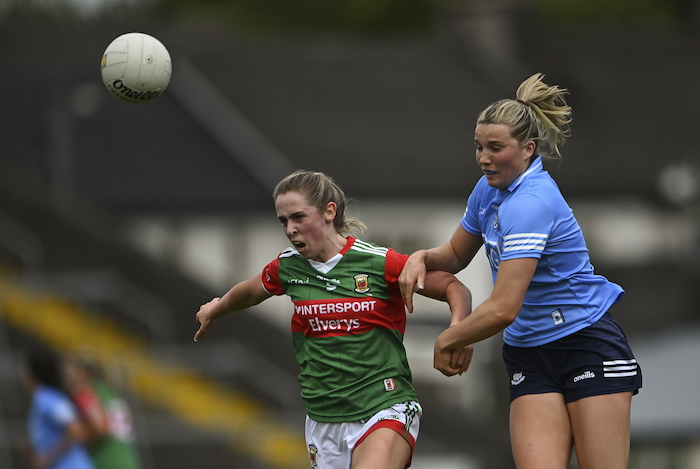 Holding on: Sinéad Cafferky of Mayo in action against Jennifer Dunne of Dublin. Photo: Sportsfile

Mayo did go right back down the field and had a great goal chance of their own when Rachel Kearns got in behind the defence, but her effort was blocked on the line and was cleared away to safety.

Niamh Kelly cut the gap back to two ponies with another well taken points just before the ten minute mark, but the next score of the day was another major for Dublin.

This time Dunne was the one who scored the goal after she was on the end of a smart handless from Lyndsey Davey to finish past Laura Brennan in the Mayo goal. That was the last score of the first quarter which ended with Dublin leading 2-1 to 0-2.

The second instalment of the action got going with Siobhán Killeen pointing from close range for Dublin, which was replied to by a Sinead Cafferkey point from another half goal chance for Mayo.

Lyndsey Davey pointed for distance for Dublin 26 minutes in and they followed that up with their third goal of the day which put the result beyond doubt even before the half time whistle when Heatheron finished to the net. Mayo did reply with a point from Grace Kelly before the break, but Dublin went in leading by eight at the turn around on a score of 3-3 to 0-4.

Tyrell kicked a brace of points not long after the resumption and to confirm it really wasn’t going to be Mayo’s day, Rachel Kearns saw her effort for a goal after getting by Abby Sheils in the Dublin goal come crashing back off the bar.

Dublin tagged on five more points before the second water break with Mayo putting three more on the board, but also missing a few frees they will probably feel they should have got scores from.

The final quarter was all about seeing it out for Dublin which they did with relative ease with Sinéad Aherne getting their fourth goal of the day from the penalty spot.

For Mayo the focus now shifts to the championship where they are in group one alongside Cavan, Armagh and Monaghan and they get they get their championship season up and running on July 10 with a clash against the Breffni county.