Mayo are back in division one for next year - the got the result they needed in Ennis on Sunday afternoon, but left the Munster venue with plenty of questions still to be answered and few more headaches after picking up injuries to two key men.

Cillian O’Connor had kicked 1-4 in his 100th appearance for Mayo before he had to limp out of the action just before the break, following in the footsteps of his younger brother Diramuid who left the fray not long after ten minutes had elapsed.

With Mayo opening up their championship in two weeks time away to Sligo they will be hoping that the injuries to the Ballintubber pair are not serious, with no let up in the hopeful run of games coming up over the next two months.

Mayo looked to have this game done and dusted nine minutes into the second half when Rory Brickenden slotted over Mayo’s 17th point of the day after being picked out by Kevin McLoughlin to put his side 10 points clear - but what happened after that is something that will have James Horan and his management team, knowing there is still lots that Mayo have to work on if they are going to get to the level they aim to be. 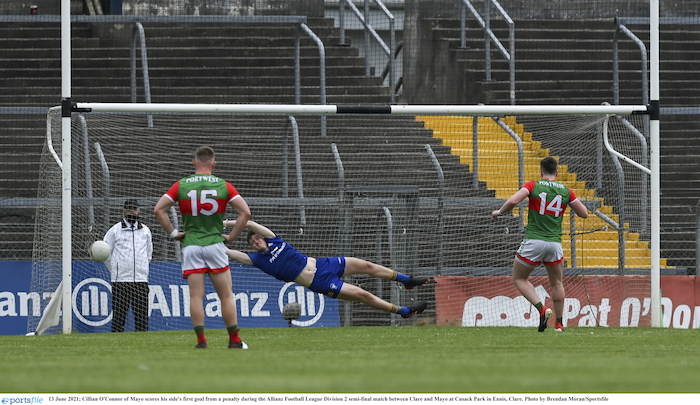 Back of the net: Cillian O'Connor dispatches his penalty against Clare. Photo: Sportsfile

When Mayo were at their best, they were thrilling, free flowing and great to watch. They played with abandon and attacked at every opportunity with powerful runs from deep supplementing quick thinking and intelligent darts from their attacking numbers.

But they have yet to find the right bolt to keep the stable door shut at the back and while they have been running up big scores themselves, they have looked shaky at the back at times and against better opposition, it could cause serious issues.

The first quarter of the game saw Mayo shake off an early Clare surge to go in leading 1-7 to 0-5 at the break. The goal coming from the penalty spot after Cillian O’Connor had dusted himself down after being fouled by Cillian Brennan. Kevin McLoughlin picked off a Stephen Ryan kick-out and moved the ball to O’Connor who was shaping to shoot for goal when he was taken down from behind.

Clare had put themselves into a 0-5 to 0-3 lead nine minutes in thanks to a rash of fine scores from the likes of Eoin Cleary and David Tubridy - but Mayo took control of the game back with Tommy Conroy kicking a brace, Bryan Walsh arcing one over from a tight spot and O’Connor pointing from play along with his goal to put Mayo five clear at the water break.

The really should have had a second goal before the first break called by the referee, but Matthew Ruane was unable to get his shot away with enough power after driving through the heart of the Clare defence.

The second quarter was much of the same as the end of the first, with Mayo moving the ball well at pace through both hands and with the foot as they kicked another 1-6 to Clare’s 0-3. Mayo’s second goal just on the half hour mark was another demonstration of their power in attack.

Lee Keegan picked up the ball in attack from Oisin Mullin, he made a surging run before laying it off to Tommy Conroy. The Neale man had Mullin keeping up his run on his shoulder and Conroy found him at speed. Mullin kept his nerve and side stepped a Clare defender before finishing from close range to the back of the net.

Points followed from Keegan, O’Connor and Ryan O’Donoghue who put in another good shift for Mayo before the break and they went in leading 2-13 to 0-8. Job done it looked like and all eyes were now firmly focused on Sligo. 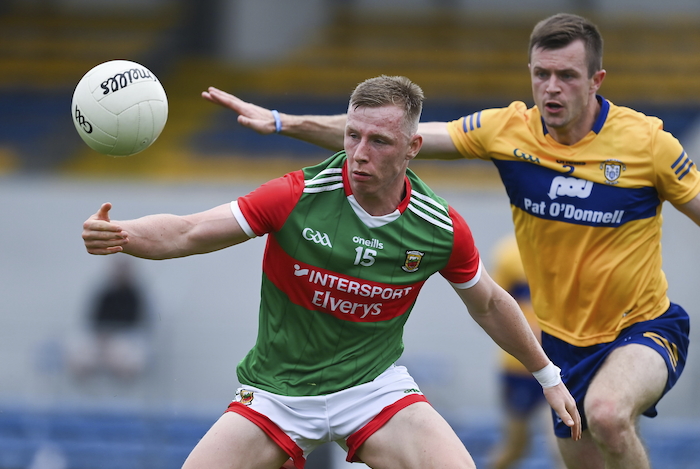 Eyes on the ball: Ryan O'Donoghue looks to control the ball against Clare. Photo: Sportsfile

The early exchanges in the second half saw Cleary and Ruane exchange points, before the first worry line appeared for Mayo. David Tubridy lined up a free from out on the far side of the field, his effort dropped short and Darren O’Neil ghosted in unmarked at the back post to flick the ball out of the grasp of Robert Hennelly in the Mayo goal to raise the first green flag of the day for Clare.

Mayo looked to have ridden out that storm with Conroy, Paul Towey and Brickenden responding with points for James Horan’s side, with Tubridy getting one back for Clare - to leave Mayo leading 2-17 to 1-10 and still looking in control of the game.

But on 45 minutes having just about escaped conceding a second Clare goal, Mayo did just that. Tubridy again was the supplier dropping a long ball in on top of O’Neill, who out jumped Aidan O’Shea at the back post and fed the ball to Gavin Cooney who finished the ball to the net from close range.

Again Mayo looked like the responded well when Paddy Durcan pointed after a big run through the Clare rearguard, but the Munster men kept coming back and a brace of points from Cleary and one from sub Emmet McMahon who finished the day with three to his name - had just five between the teams at the water break.

The final quarter was all about Mayo trying to control the game and see it out and Clare looking to play the game at a manic pace and catch Mayo out again - they gave it a good go, but the likes of Aidan O’Shea and Lee Keegan in particular stood up to keep control of the ball and work possession around the house to take the sting out of it late one.

Clare did manage to bring the gap back to three points late on and leave Mayo open to a sucker punch of a goal that would have sent the game to extra time, but late on Paddy Durcan once again stepped up and showed his leadership to kick the injury time point to put Mayo four clear and back into division one for next season.

Job done, but a lot more work to be done before the real work of the Summer starts in a few weeks time.