The Mayo senior Camogie team got their first National League campaign in a number of decades up and running in a rainy Ballyforan on Saturday afternoon.

The went into the clash against Roscommon as underdogs and while the came away from the game without the points, they will have plenty positives to look back on and work on before their next outing against Kildare next weekend.

The game couldn’t have started any better for Jimmy Lyons side, when Lisa Scahill pulled on the ball on the ground close to goal and drove it the back of the net, following a strong run by Mariead Murray to set her up two minutes in.

That was followed up but a fie point from midfielder Meabh Delaney four minutes later and Mayo were leading 1-1 to 0-0.

Roscommon did push themselves back in front by the 13 minute mark, thanks to points from Kelly Hopkins and Nicola Green, before the impressive Shauna Fallon hit their first goal of the day when her free dropped short of the target and mix up between the goalkeeper and Mayo defence saw it slip over the line.

But that score didn’t knock the stuffing out of the Mayo challenge and the came right back at their hosts and Delaney pointed a free from distance to level it up just after the quarter hour mark.

The hosts edged back in front though another Fallon point on 21 minutes, but five minutes later Mayo struck for their second goal of the day. Delaney lined up a free from out on the right hand side, her effort was low and and it skipped off the deck and into the back of the net to put Mayo into a 2-2 to 1-3 lead. 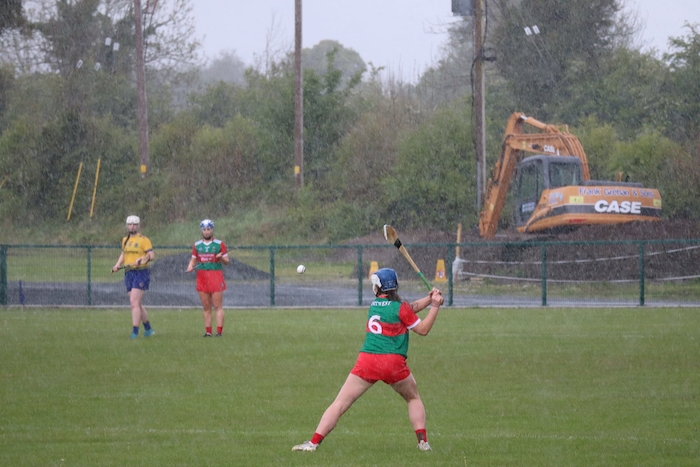 Driving on: Ava Lambert drives the ball down the field for Mayo against Roscommon. Photo: Mayo Camogie/Facebook.

Sinead O’Brien close the gap to a single point before the break with a point for the hosts, but Mayo would have been very happy going in leading 2-2 to 1-4 at the turnaround.

Roscommon came out in fresh blue jerseys for the second half, to try and help counteract the soaking that both sides got in the first half hour and they didn’t look back, outscoring Mayo 1-7 to 0-0 in the second half despite the best efforts of the Mayo players.

They reeled off three points from half time to the 42nd minute to go two points clear, but Mayo were still very much in this game - the decisive score came on 44 minutes when Lena Gacquin reacted quickest to collect a Fallon free that was batted away by Mayo goalkeeper Aoibheann Crawley and finish from close range.

That score put the Rossies up 2-7 to 2-2 and in control of the game, Mayo kept battling away but three late points from Fallon and one from Alisha Lenhan rounded off the scoring for the day and the points stayed at home with Roscommon.

But there is plenty for Mayo to take from this game and bring forward as they set out on this new adventure in front of them.