Mayo had to dig deep at the end against Derry in their season opener in MacHale Park, to get their National Hurling League Division 2B season off to a winning start.

Mayo spurned a number of chances in the first half, running up 13 wides in the opening 35 minutes and were almost left to regret those as Derry came strong at the end.

The led by three points at the break and by the second water break they had that lead out to six and then seven not long afterwards, but a goal from Derry corner forward Eoghan Cassidy had the Oak Leaf county back in the game.

With three minutes left on the clock, there was just one between them thanks to a Cormac Doherty 65 - but Mayo went straight down the field and Shane Boland managed to hook the ball over the bar off his wrong side under pressure for a fantastic score.

But Derry kept coming and Gerald Bradly flashed a shot at goal that just cleared the bar to cut the game back to a single point effort. Mayo keep their heads and Brian Hunt took on the sensible option and placed the ball over the bar to push his side further clear when he could have risked playing in a man for a goal chance.

The Mayo defence stood firm and held out Derry’s final fling of the dice from a Doherty free that was blocked by the Mayo rearguard and the final whistle went and singled the two points are staying in Mayo.

Mayo led by three points at the first water break, the halt in play was called just as a downpour engulfed MacHale Park, but thankfully the rain soon exited stage left and the game was played out in good conditions.

Derek Walsh’s men had five points on the board at that stage and really should have had a few more, hitting six wides in the opening exchanges. 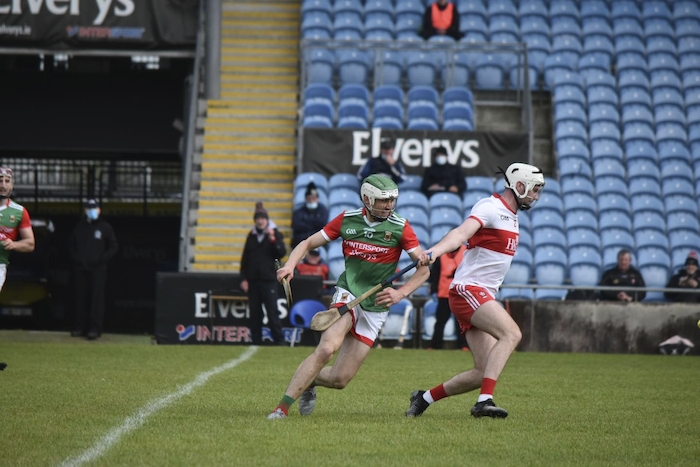 My ball: Adrian Phillips battles for possession in the middle of the park. Photo: Mayo GAA

Shane Boland opened and closed the scoring for Mayo in the first quarter with a brace of frees, with the other points coming from newly installed captain Keith Higgins, Cahtal Freeman and Adrian Phillips.

Derry’s scores came from the sticks of Cormac Doherty and Niall Ferry and despite having limited attacks they came close to getting goal early on when Brian Cassidy’s shot came back off the post three minutes in.

Mayo remained consistent at least over the second quarter of the game, landing five more points before the break but also keeping the wide tally up, finishing up the first half with 13 missing the target with the breeze behind their backs.

Cormac Doherty pointed a free for Derry not long after the resumption with Adrian Phillips hitting his second of the day not long after, which was quickly followed by Boland free. Sean Regan drove over a long range point after winning the puck-out from Boland’s point and the next score was one to remember.

Mayo keeper’ Gerald Kelly drove the ball over the bar form inside his own 21 after a short puck-out routine with Stephen Coyne, for a score that you really had to see to beleive and they tried it again a short time later, but it didn't come off that time.

Two more Doherty frees kept Derry in touch on the scoreboard, but the last word on the half was left to Boland who grabbed his fourth point of the day from a free to send Mayo in leading 0-10 to 0-5 at the break.

The second half opened up with Derry getting two points on the bounce from the impressive Doherty to cut the gap back to just two, Boland steadied the ship with a pointed free after Jason Coyne was fouled and Mayo tagged on a few more scores and looked like they were going to drive on to victory - but it was going to be a hard battle to finally get over the line, but they did in the end.