Mayo rattled home 5-20 to see off Tipperary with ease and book their place in another All Ireland final - but they left Croke Park with plenty to work on as the Munster champions hit the back of the Mayo net three times and if they had taken the two early goal chances that presented themselves it could have been a very different game.

But Mayo have to be given lots of credit for the way the rode out those early scares to hassle and harry Tipperary at every opportunity for the final 25 minutes of the half and put the game to bed with a devastating display on the scoreboard.

So efficient were Mayo that the first time they put the ball wide in the game was when Aidan O’Shea hooked one to the far side of the post with almost an hour gone on the clock.

Cillian O’Connor as is so often was the main man on the scoreboard finishing up with a remarkable 4-9 of Mayo’s tally of 5-20 - the Ballintubber man was ruthless in his finishing and his ability to sniff out half and chance and make it count was top class.

Tipperary twice inside the opening eight minutes got in behind the Mayo cover for goal chances with David Clarke brilliantly saving from Michael Quinlivan when a poor pass from Matthew Ruane was intercepted and worked quickly downfield and the Tipperary centre forward beat Lee Keegan to win the ball to find himself baring down on Clarke. 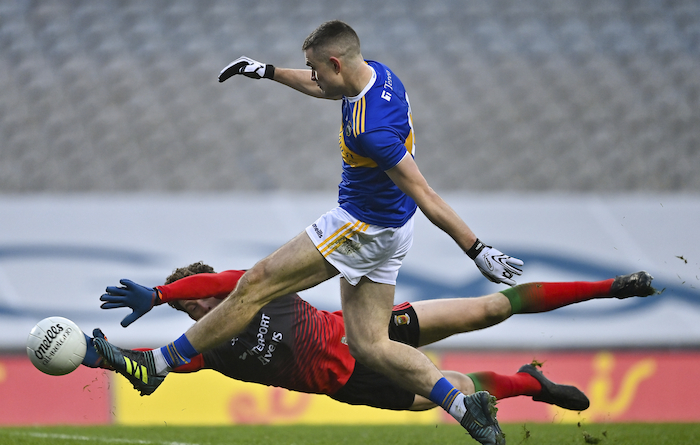 Super-save: David Clarke gets down low to save from Michael Quinlivan. Photo: Sportsfile

But the Ballina shot stopper showed all his experience and ability to close the gap and force Quinlivan a bit wider than he’d like and Clarke got down to put the ball out for a 45. Not long after Conor Sweeney got himself in on goal and didn’t hit his shot as he’d like and Clarke saved easily - he then got rid of it quickly and the ball was worked down the field by Mayo and Cillian O’Connor got in on the end of pass from Tommy Conroy to raise the first green flag of the day.

That score put Mayo 1-2 to 0-1 up with nine minutes got with O’Connor bagging two points before that from frees. Tipp’ did hit back with their own first goal of the evening when Brian Fox got his shot away as he fell and the ball slipped just past Clarke after some less than touch tight defending by Mayo saw a big gap open up in their defence.

But from then on Mayo grabbed the game by the throat and entered their superiority until the had then contest put firmly to bed. O’Connor pointed a free, Matthew Ruane fisted one over the bar, Paddy Durcan also used his paw to point and Tommy Conroy pointed a mark before the first water break which came with Mayo leading 1-6 to 1-2.

Mayo continued to ramp up the pressure with Kevin McLoughlin, O’Connor and Conroy all pointing before O’Connor grabbed his second goal which came about following a big turnover by Eoghan McLaughlin who in turn found Aidan O’Shea to lay on the ball to O’Connor.

The Ballintubber man kept adding on points and his third goal came six mixtures from the break when he chased down a slack pass from a Tipperary defender to get to the ball before Evan Comerford and put Mayo 3-11 to 1-4 up.

There was time for a fourth Mayo goal before the break and this one went to the younger O’Connor - Diarmuid who not for the first time slipped in at the back post unnoticed to flick the ball home from close range after a 45 from his brother dropped short.

That score sent Mayo into the half-time break leading 4-12 to 1-5 and with two feet firmly in the All Ireland final, all that was going to stop them was the smothering of fog that had blanketed Croke Park and the country getting so bad that the game would have to be called off. 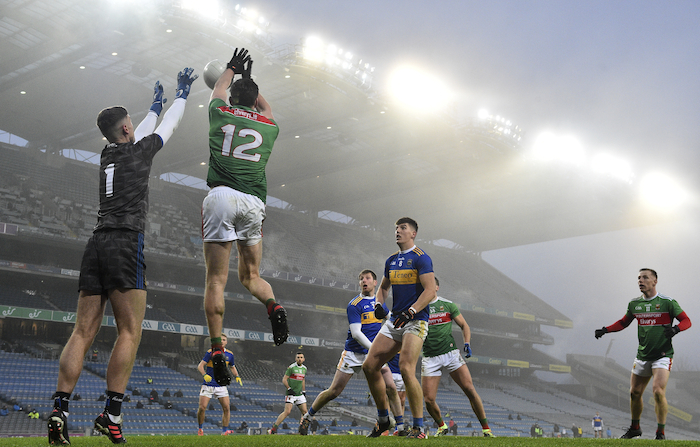 In at the back: Diarmuid O'Connor rises highest to get Mayo's fourth goal. Photo: Sportsfile

Mayo’s fifth goal of the day went to O’Connor who got in behind the cover once again after his man slipped on the turf and he made no mistake from close range with 44 minutes gone.

But credit to Tipperary they kept coming at Mayo - and worryingly for Mayo they managed to create a large number of goal chances before the end taking two of them with Conor Sweeney and Paduie Feehan both finding the net to put some gloss on the scoreboard for the Munster champions.

Mayo know they are going to face a much tougher challenge in a fortnights time and that they will have to tighten things up at the back if they are to stop Dublin - but having been well warned from this game, James Horan and his brains trust will have plenty to work and and will be busy finding solutions for over the coming 13 days.

Once again Dublin stand in the way of Mayo creating history and once again Mayo will not fear or be found wanting to give it their all in their quest to end a journey that has been decades on the road at the stage.