The Mayo senior hurlers picked up their first competitive win of the year with a 25-point destruction of Monaghan on Saturday afternoon.

The gulf in class between teams who were playing their league hurling to divisions apart was evident from the get go as Mayo more composed and solid from the start and a led up front by a sharpshooting display from Shane Boland who finished with a dozen points to his name.

There were six points in it at the first water break with Mayo leading 0-7 to 0-1, thanks to a trio of points from Boland along with a brace from Jason Coyne as they got their eye in early in front of the posts.

It was more of the same after the resumption of the action with Mayo tagging on 1-6 before the half-time break.

Watch back the game in full below

The goal coming after Cathal Freeman was allowed to break down the flank without a hand being laid on him for a good 50 meters. The Mayo number seven’s attempted effort looked to be causing no danger to the Monaghan goal until full back Kevin Cawley tried to intercept it only to deflect it past his goal keeper and into the net.

Monaghan did pull a goal back right on the half time whistle with Aidan Burns showing great strength to hold on to the ball under pressure tight to the enplane and direct it past Gerald Kelly in the Mayo goal - that strike sent Mayo in leading 1-13 to 1-4 at the break.

The game was put out of any doubt within minutes of the restart - Cathal Freeman drove over a point from distance and not long after he took another crack at the target from downtown - his effort dropped short but was misjudged by Patrick Collins in the Monaghan goal who had just come on at the break and the ball ended up in the back of the net. 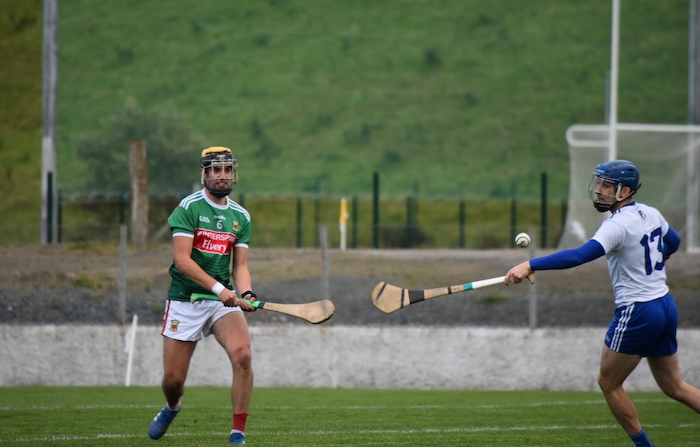 Up and away: David Kenny clears the ball for Mayo. Photo: Ciara Buckley

It was all Mayo from then on for the most part - though Monaghan did craft a second goal of the day with a free flowing move that was finished to the back of the net by Aidan Burns.

Mayo got their third goal of the day when Brian Morley flicked it over the advancing Monaghan custodian to put a seal on the win.

It was a case of job done for Mayo and Walsh will be happy with the scoring return his side got in their first championship outing since June 2019 - but he knows there will be much bigger challenges ahead.

But it was job done and one to the next one for Walsh and his side in a fortnights time.