We know now seven of the eight sides who will contest the quarter-finals of the Mayo GAA senior football champions with Ballina Stephenites, Ballintubber and Westport through as group winners, with either The Neale or Ballaghaderreen (who are already through - just not confirmed as group winners ) joining them on the top half of today’s draw.

Going through as runners up already are Knockmore, Aghamore and Breaffy with either Belmullet or The Neale making it of group one and into the hat for the last eight. 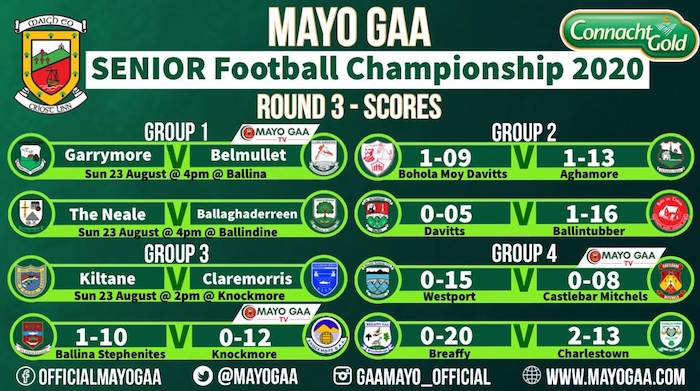 The big news out of Saturday’s round of action in the senior championship was in Group Four where Castlebar Mitchels crashed out of the competition after their second defeat in row. Westport saw them off in Breaffy by seven points and we have all the action from that game covered at https://www.advertiser.ie/mayo/article/116416/port-storm-through-to-the-last-eight

Breaffy came through in second place in that group with a one point win over Charlestown in Claremorris on a score of 0-20 to 2-13. The west Mayo men were leading by four points down he home stretch by a late Mattew Lenehan goal put just one between the teams at the end. Breaffy led 0-11 to 1-5 at the break with Colm Flynn kicking a number of points - before Aidian O’Shea, Mattie Ruane and Conor O’Shea took one for Breaffy in the second half. With Jack Reilly and Paul Towey battling well for Charlestown, who now head to the relegation play-offs despite drawing with group winners Westport and pushing second placed Breaffy all the way.

In Group Two defending champions Ballintubber made it two wins from three to top the group thanks to a 1-16 to 0-5 win over Davitts. Kevin Johnson’s men did it without Cillian O’Connor and and had ten different scorers over the hour with Diarmuid O’Connor chipping in with 1-2 and Ciaran Gavin and Stephen O’Malley both landing three points.

It’s not all bad news for Davitts though who avoid the relegation play off on scoring difference after Aghamore’s 1-13 to 1-9 win over Bohola Moy Davitts.

Despite pushing Aghamore close in a game where a win would have seen them into the last eight for Bohola Moy Davitts the damage was done in their second round loss to Ballintubber at home where the lost 3-19 to 1-7 and the go into the relegation play-offs because of a scoring difference of -22 compared to Davitts’ -20 after both sides finished on one point each in the table after the round one draw.

In group three Ballina Stephenites had a come from behind 1-10 to 0-12 win over Knockmore in Crossmolina. We were there to catch the action in that one - you can read all about it at https://www.advertiser.ie/mayo/article/116417/ballina-book-top-spot-with-final-quarter-flurry.

There are three games down for decision today in the Mayo GAA Senior Football Championship. In Group One it’s Garrymore v Belmullet in Ballina and The Neale v Ballaghaderreen in Davitts both games throw in at 4pm where there is still a lot to play for.

While in Group Three Kiltane and Claremorris will clash in Knockmore with the loser heading to the relegation play-offs.