The rain poured, the wind blew a gale and the Rossies went home with the bacon.

While nobody was writing off Roscommon before this one – they had preformed stoutly in the league and had the coin flipped in their favour a few more times than it did, they would have held on to their division one status for next year.

Mayo were the league champions, had got a good weeks worth of work into their legs in New York at the start of the month after dispatching the challenge of their hosts with ease and were the far more experienced and canny operators at this level – so if it came to the crunch it was expected that they had everything they needed in them to see off Anthony Cunnigham’s men.

But that’s not exactly how it panned out – was it.

The one thing that Mayo took home from New York with them was their dodgy radar when it came to shooting – they piled on the wides in this one, just like they did in Gaelic Park, the one big difference though was that Roscommon weren’t going to let them away with it like their American cousins did earlier in the month.

Mistakes happen in games, kick-outs go astray, passes miss their targets, players go down blind alleys when they know better – but Mayo were supposed to the wiser and smarter side – with all the experience under their belts.

But when it came to the final frantic few minutes it was the visitors who looked the more well oiled machine, thinking things through better and making the smart decisions. That will sting most for this group and their management team.

No-one can deny Roscommon earned their win, but Mayo contributed to it in so many ways they will be frustrated with themselves until they get a chance to show what they are really at – in four weeks time. 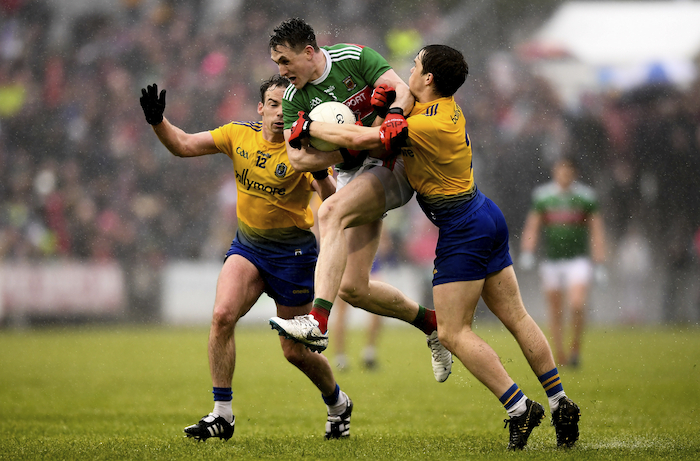 Paddy Durcan attempts to break through the tackle: Photo: Sportsfile

Fintan Cregg was the hero, kicking winner three minutes into injury time, but it was a win backboned by a massive team effort from start to finish.

Cathal Cregg rocketed the game to life six minutes in, picking up the ball 40 meters out from goal and arrowing along the stand side of the field before hammering it past Rob Hennelly.

Up to that point Mayo looked like they were well in control of the game, dominating the Roscommon kick-out and putting two points on the board through Matthew Ruane and a fine Darren Coen score, Mayo also kicked three wides in that run.

They did respond through a Jason Doherty free and a Paddy Durcan point to edge back in front nine minutes in, but Roscommon were about to hit another little purple patch.

Mayo should have rattled the net themselves or at least got a point on the 15 minute mark when Evan Regan picked out Diarmuid O’Connor with a delicious ball, but the Mayo captain hammered the ball wide. Conor Daly pointed a few seconds later to put Roscommon four clear and in confident mood.

Darren Coen found his range for the second time for Mayo in the next attack to cut the gap to three – he was forced to receive treatment in the next play and Evan Regan slotted over the resulting free to leave two between the teams.

Conor Cox showed his class with a well-taken point 20 minutes after he broke down the left-hand side of the field. And not long after he extended Roscommon’s lead from a free to 2-4 to 0-6.

Roscommon should have had a third goal 27 minutes in, Mayo looked to have done the hard work and forced a free out for over carrying the ball. Keith Higgins got involved and picked up a booking and the call was changed to a throw ball.

From that restart the ball fell to Glennon who pulled on it on the deck but Hennelly managed to save it and put it out for a 45 – which was converted by Roscommon goalkeeper Darren O’Malley to put his side five clear.

Darren Coen landed his third of the day half-an-hour in when he was quickest to react after a Keith Higgins shot came back off the post and that was quickly followed by a fine Evan Regan score from the MacHale Road side to leave three between the teams.

O’Malley kicked his second score of the day for Roscommon after being called up to take a long-range free on 35 minutes, which was instantly replied to by a trademark Lee Keegan effort.

Ruane then kicked his second of the day from 35 meters out to close the gap back to two, with 120 seconds of injury time left. Neither side managed to add to their tallies before the break, with Roscommon going in leading 2-6 to 0-10.

Before both sides made their way down the tunnel there was a bout of jostling that saw two players from either side pick up yellow cards before the resumption of the action.

Evan Regan and O’Malley swapped points early in the second half to keep the gap at two in favour of Anthony Cunningham’s men. Rob Hennelly came up for a crack at 40m free on 42 minutes but pulled it wide on the near side for Mayo’s 11th miss of the day.

Conor Cox stretched the visitors lead back out to three points on 44 minutes with a brilliant score from out on the left as the Rossies began to smell blood.

Darren Coen kicked two on the spin, his second one looking from the stands very much like it went the wrong side of the posts but it was given – his counterpart in the Roscommon number 14 jersey Cox wasted no time in responding to keep his adopted side two clear with 48 minutes gone in the second half. 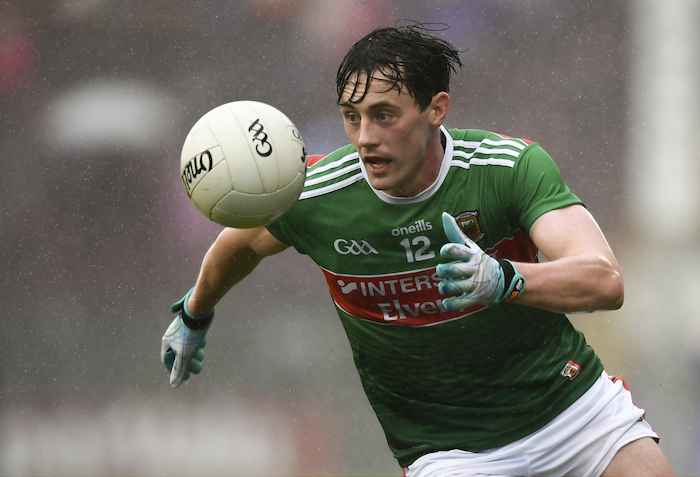 Eyes on the prize: Diarmuid O'Connor has eyes only for the ball. Photo: Sportsfile

Andy Moran cut the difference back to a point with a very typical score from the Ballaghaderreen man from out in the right corner and then Paddy Durcan levelled it up with a pile driver of an effort and there was still 20 minutes to go.

Enda Smith didn’t take long to make his impact felt when he hammered over Roscommon’s tenth point of the day to put his side back in front with 15 minutes to go.

Fergal Boland levelled it up two minutes later with an effort off the outside of his boot following some fine play by Lee Keegan in the build-up and it was all to play for once more.

Boland put Mayo in front with 10 minutes to go with a nice effort under pressure following some nice build-up play from the Mayo attack.

O’Malley had a chance to level it from a long-range free but he pulled it wide of the target, Conor Cox made no mistake when he slotted over a free from a tight angle with seven minutes left to make it all square once more.

Roscommon were forced to see out the remainder of the game with 14 men when David Murray picked up a black card with three minutes left in normal time and his side having already used their six subs.

Lee Keegan had a chance to put Mayo back in front with two to go, but his effort dropped short into the hands of O’Malley, then Andy Moran had an effort blocked down by Niall Daly. The ball was swept down the field by Roscommon and Fintan Cregg made no mistake to put his side back in front with two minutes of injury time to go.

Andy Moran was shown a black card for a hand trip as he tried to stop Roscommon breaking from the back again.

Mayo had a last gasp chance to level it up from a free out on the right-hand side of the field but Kevin McLoughlin pulled his effort wide on the near side and the travelling Roscommon faithful erupted in jubilation as they sent Mayo packing from the Connacht championship and themselves back into the final.